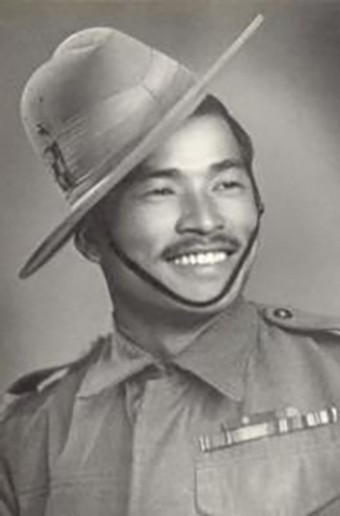 In March of 2008, the world lost one of the most fearless soldiers to have served during WWII; a man who single-handedly cleared five heavily fortified positions with nothing more than a knife, a few grenades, a rock, and a complete disregard for the bullets flying around him the whole time. This is the story of Bhanbhagta Gurung.

First thing first, we should address the fact that there doesn’t seem to be a clear consensus on how exactly Havildar Bhanbhagta Gurung’s first name is supposed to be spelled (Havildar is the rank he held, not his name). While some spell Gurung’s first name as “Bhanubhakta”, others list it as “Bhanbhagta”. Since even the most reputable of sources can’t seem to give a satisfactory answer on which spelling is correct, we’ll be using the name listed on his Victoria Cross citation, Bhanbhagta for the duration of this piece.

Moving on. Little is known about Bhanbhagta’s early life save for that he was born in the small Nepalese village of Phalpu in September of 1921. In 1940, at just 18 years of age, Bhanbhagta joined the British army a few months after World War II began, at which point he was drafted to the “third battalion of the 2nd King Edward VII’s Own Gurkha Rifles.“

For those of you unfamiliar with what Gurkhas (sometimes spelled Gorkhas) are, that’s the name name traditionally given to soldiers recruited into the British or Indian military from Nepal. The word Gurkha is taken from an area once known as the “Gorkha kingdom” which was folded into, and became part of, Nepal around the turn of the 20th century. The Gurkhas were originally formed after British soldiers fighting in Nepal were simultaneously impressed and terrified by the soldiers they encountered during the Anglo–Nepalese War of 1814. After the war ended in 1816, the British, spying an opportunity to bolster their ranks, offered these fearless Nepalese soldiers a chance to volunteer to serve in the British army, referring to them collectively as Gurkhas, a name that is still used today regardless of which area of Nepal a given soldier happens to hail from.

Back to Bhanbhagta- although he joined the Army in 1940, he didn’t get his first taste of combat until 1943 when he fought alongside several thousand other men behind enemy lines in Burma. During this time, Bhanbhagta was promoted from rifleman to the rank of Naik (the equivalent of a corporal). However, he would later be demoted back to rifleman in 1944 when his commanding officer told him to patrol the wrong area and then refused to admit he’d made a mistake, instead putting the blame on Bhanbhagta.

Bhanbhagta’s shining moment would come a year later on March 5th when he single-handedly took out five entrenched Japanese positions under heavy fire and out of ammunition for his gun, doing his best impression of Lance-Corporal James Welch, who once captured four armed German soldiers with an empty gun. Bhanbhagta was part of a platoon of men given the singular goal of taking a hill colloquially known as “Snowdon East”. The hill was a strategic foothold that had been overrun by the Japanese who, in the process, killed about half the Gurkha company after the Gurkhas had run out of ammunition and been forced to fight their way through the enemy lines with nothing but knives while under heavy fire. Bhanbhagta’s platoon was told to take the hill back “regardless of cost.” Bhanbhagta apparently took this command quite literally.

While Bhanbhagta and his men were sneaking up on the position, they were spotted and initially pinned down by machine gun and mortar fire.  Because of their extreme close proximity to the enemy troops, support artillery from their own side wasn’t possible. They were stuck. While all of this was happening, an enemy sniper from a tree approximately 75 meters to the south began picking off Bhanbhagta’s comrades one by one. Realising that he couldn’t get a clean shot if he was lying down, Bhanbhagta stood up while still being shot at from several enemy positions and managed to take out the sniper.

Bhanbhagta then signalled to his men to follow him as he sprinted up the hill in the face of the enemy fire raining down. Several Gurkhas were killed in the dash and they were again pinned down.

Apparently not one to just sit around while being shot at, Bhanbhagta sprinted the remaining 20 meters or so to the nearest enemy trench and quickly dispatched those inside with a couple of well thrown grenades. He then ran towards a second enemy position, killing the armed soldiers inside with his bayonet. Bhanbhagta then rushed two other positions, taking them out with his now trademark combo of grenades and furious rifle-stabs.

All of this happened while Bhanbhagta was being “subjected to almost continuous and point-blank machine-gun fire,” particularly from a fifth position slightly further up the hill.

Bhanbhagta then headed towards the final position, a small bunker where a machine gunner was raining down heavy fire and doing a boatload of damage to the Gurkhas. Nevertheless, Bhanbhagta managed to get on top of the roof of the bunker without being shot, and then, being out of explosive grenades, hurled two smoke grenades into the opening from which the machine-gun was firing. When two Japanese soldiers emerged, Bhanbhagta pounced on them with his kukri (a curved blade not dissimilar from a machete), dispatching them both. He then ran into the machine-gun nest, having to kill the machine-gunner with a rock instead of his kukri, because of the extreme close quarters.

Bhanbhagta and his men then took possession of the machine gun and managed to hold the position from the counterattack by the enemy soldiers, proving that you absolutely do not want to mess with a Gurkha. No seriously, the Gurkhas are feared and respected in equal measures for precisely the reason Bhanbhagta is the subject of this article- they’re utterly fearless in combat. For instance, during WWI, despite their relatively small numbers, thousands of Gurkhas earned medals for gallantry and there are dozens of documented stories about Gurkha soldiers encountering seemingly hopeless odds and still coming out on top. Even outside of war, for example, there’s Bishnu Shrestha, a retired Gurkha who fought against 40 armed robbers and won. Next up, we have Taitex Phlamachha, a former Gurkha who punched a mugger to the ground whilst that mugger’s own knife was lodged inside Phlamachha’s arm.

Then there was Lachhiman Gurung, who, according to the July 27, 1945 edition of The London Gazette,

was manning the most forward post of his platoon which bore the brunt of an attack by at least 200 of the Japanese enemy. Twice he hurled back grenades which had fallen on his trench, but the third exploded in his right hand, blowing off his fingers, shattering his arm and severely wounding him in the face, body and right leg. His two comrades were also badly wounded but the rifleman, now alone and disregarding his wounds, loaded and fired his rifle with his left hand for four hours, calmly waiting for each attack which he met with fire at point blank range. Afterwards, when the casualties were counted, it is reported that there were 31 dead Japanese around his position which he had killed, with only one arm.

Despite losing the use of his hand and right eye during that battle, among other injuries, Gurung lived until December 12, 2010, dying at the age of 92.  Apparently, it took Death a while to work up the courage to pay Gurung a visit.

Perhaps the thing that sums up the Gurkhas best is this quote from Field Marshall Sam Manekshaw: “If a man says he is not afraid of dying, he is either lying or is a Gurkha.”

After WWII, Bhanbhagta’s superiors tried and failed to convince him to continue serving. As it turns out, Bhanbhagta had an elderly mother and young family to support and he wanted to go home to be with them. Before he left the army though, Bhanbhagta was re-promoted to his previous rank of Naik when it emerged that his previous indiscretion wasn’t actually his fault. He was also given the honorary rank of Havildar (sergeant) for obvious reasons.  He died on March 1, 2008, at the age of 86.