This Day in History: February 27th- Sigmund and Carl 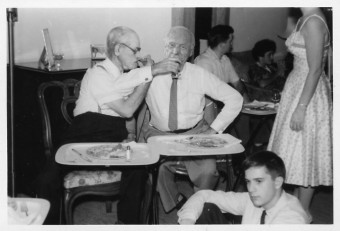 On February 27, 1907, the two leading theorists in the field of psychoanalysis, Sigmund Freud and Carl Jung, met in person for the first time after corresponding for almost a year. Their first conversation reportedly lasted for over 13 hours, so it’s safe to say the two men hit it off. At first.

Their association began when Jung, the upstart, sent Freud a copy of his published works (not realizing Freud already had a copy since he’d heard he was mentioned in glowing terms in Jung’s writings.) Freud, in turn, sent Jung a set of his latest essays six months later, establishing a relationship between the two that would proliferate for the next six years.

Although they became good friends, the relationship was definitely that of a young acolyte and an older sage. Freud himself referred to Jung as “the Joshua to my Moses, fated to enter the Promised Land which I myself will not live to see.” Although they did not always see eye-to-eye, Freud still considered Jung his protégé, dubbing him “my successor and crown prince” and even “spirit of my spirit.”

In 1909, Freud and Jung toured the United States for two months, introducing psychoanalysis across the country. Both men were enamored of American culture, especially the aging Freud, who found the electrifying pace of the US refreshingly invigorating.

This is also when their bromance reached its height, but close quarters and endless probing conversations brought to light numerous ideological differences that would later spell the end of their friendship. Their disagreements centered on their disparate concepts of the unconscious. Although Jung agreed with Freud’s assessment of the unconscious as a warehouse of repressed desires and emotions, he also believed this theory to be incomplete and needlessly negative.

Jung believed there was another, deeper form of the unconscious. Dwelling well below the personal unconscious of Freud’s reckoning, the collective unconscious contained the archetypes, primordial images common to all humans which have existed since the dawn of time. Freud didn’t think much of Jung’s interest in mythology, calling it “unscientific.” In turn, Jung didn’t think much of Feud not thinking much of … well, you get the picture.

Things got positively catty when Jung started a rumor that Freud may have been boinking his sister-in-law, hinting the affair resulted in a pregnancy and abortion. Freud retaliated by not visiting Jung while in Zurich to see another friend. That’ll learn him.

By November 1912, the two men had reconciled enough of their differences to work together and socialize a bit once more. They were doing a conference in Munich when Freud fainted, and Jung very gently and tenderly picked him up and carried him to a sofa. Two days later, he wrote Freud a letter apologizing for earlier problems between the two and asking after his health.

The reply acknowledged their differing views in certain areas, and then in reference to his fainting episode he wrote, “according to my private diagnosis, it was migraine…note without a psychic factor which unfortunately I haven’t had time to track down…a bit of neurosis I ought to look into.”

This slight mocking really set Jung off. There was an exchange of angry letters that went on for several weeks, until Freud finally sent this “Dear John” letter in 1912,

It is a convention among us analysts that none of us need feel ashamed of his own neurosis. But one [meaning Jung] who while behaving abnormally keeps shouting that he is normal gives ground for the suspicion that he lacks insight into his illness. Accordingly, I propose that we abandon our personal relations entirely.