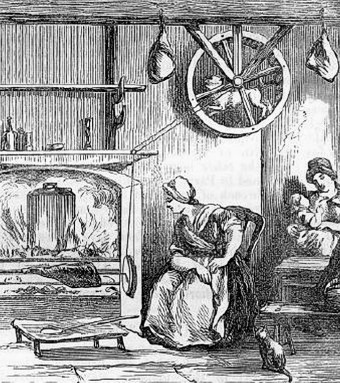 Considering how most dogs in the Western world these days are treated as a member of the family, it’s often easy to forget that the vast majority of our furry friends up until very recently were bred for a specific purpose. Perhaps no dog was bred for a more specific purpose than the now extinct, turnspit.

The turnspit was so named because it was literally bred just to run for hours on a tiny wheel that turned a spit. No, really, that was all it did. You see, a few hundred years ago the generally preferred method for cooking a large piece of meat evenly was to put it on a spit and rotate it until it was fully cooked. Cooking meat thoroughly on a spit takes anywhere between 40 and 80 minutes per kilo depending on which meat it is you’re cooking. Needless to say, roasting an adult hog on the fire for a party took an incredibly long time.

Prior to the introduction of turnspits around the 16th century, the painstakingly tedious and unrelenting job of turning the spit was left to the lowest ranking member of the household, “usually a small boy“, though in larger households the size of the spit necessitated delegating the job to an adult. The job was tough, cruel and often resulted in the poor soul tasked with doing it suffering from burns, blisters and exhaustion. What made the job more difficult  was that the spitjacks, as they were known, had to work in full uniform. In fact, during Tudor times, spitjacks working in Hampton Court were told that they had to stop working in the nude as well as to stop urinating in the fireplace.

While we’d like to say that spitjacks were replaced by dogs out of concern for their health, the truth is that dogs could work longer hours without a break and they didn’t need to be paid in anything other than food. This is why in 16th century, spitjacks were phased out in favour of a small machine powered by an even smaller dog.

So were the dogs treated any better than the spitjacks? Nope. Turnspits were generally seen more as kitchen tools than fuzzy members of the household who needed just as many belly rubs and chin scratches as normal dogs. Along with being subjected to the same long hours and awful conditions as the human spitjacks before them, turnspits would often be cruelly mistreated by their owners. For instance, to train them to run at the correct speed, a common method was simply to throw a hot coal into the dog’s wheel every time it slowed too much. During their off-time, the exhausted turnspits were known to work great as footwarmers.

Turnspits were ultimately replaced by steam-powered machines and by the end of the 19th century the breed officially was declared extinct. Intriguingly, it appears that people from the early 19th century were well aware that the turnspit breed wasn’t going to last. For example, in the book, Memoirs of British Quadrupeds, published in 1809, in regards to the turnspit the author wrote “It is now on the decline; and, in the course of another century it will probably be extinct in Great Britain“, which mirrors the breed’s actual fate almost perfectly.

Despite the fact that,  for a few centuries, the turnspit could be found in almost every large home in England, including the homes of royalty, nobody anywhere bothered to note down exactly what breeding process went into creating the dog that had ensured so many people had evenly cooked dinners. All we have to go on are historical descriptions of the breed which described it as “long-bodied”, “crooked-legged” and “ugly”. We also have a single stuffed specimen called Whiskey.

It’s not all bad though; the horrific treatment turnspits were subjected to is reportedly what inspired Henry Bergh to start the American Society for the Prevention of Cruelty to Animals, which in turn has resulted in countless animals being saved from abuse and cruelty. 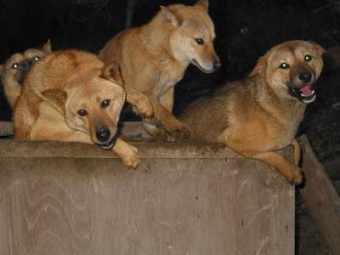