January 29, 2015 Karl Smallwood
Noah A. asks: Why do roosters crow in the morning? 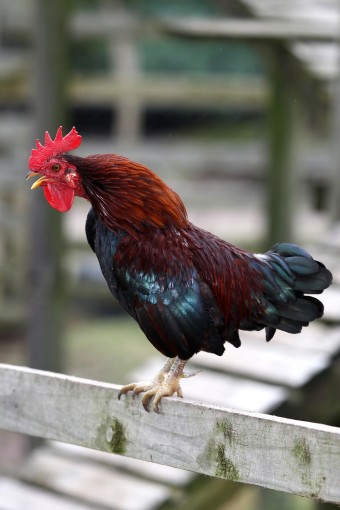 Next to the bark of a dog or the gentle meowing of a cat, the crow of a rooster is one of the most recognisable animal noises on Earth; but why exactly do roosters feel the need to crow and is there any truth to the idea that they crow more (or only) in the morning?

Surprisingly, although chickens are one of the most ubiquitous (and delicious) animals on the planet, it wasn’t until 2013 that scientists definitively answered these questions.

First and foremost, it’s important for us to point out that roosters will crow at all times and in response to a range of seemingly innocuous stimuli, like the sound of a car or someone walking into their coop. This is because the crow of a rooster serves several functions. Along with being used as a warning of sorts to let other roosters known the boundaries of its territory, the crow can be used to communicate with other birds and sometimes to celebrate getting lucky; roosters really aren’t picky when it comes to excuses for crowing.

That said, although roosters have been observed crowing at all times of day and in response to even the most mundane of stimuli, they will indeed typically crow just before or at the crack of dawn. Because of the rooster’s tendency to crow at everything, for many years scientists and bird nerds (ornithologists) were under the impression that roosters crowing at day break were simply crowing in response to the changing levels of light, as they’ve been observed doing when they see car headlights or other artificial light sources. However, after years of anecdotal stories about roosters seemingly knowing when day break was about to occur, scientists at Nagoya University in Japan decided to see if this was just in people’s heads or if roosters really were anticipating, rather than reacting to, the sunrise.

In the research helmed by Takashi Yoshimura several experiments were run on roosters to answer these questions. To start, roosters were exposed to different environments for a couple weeks.  As expected, with all groups, the roosters crowed at all times of day in response to a variety of stimuli, like being fed.

So what about the mornings? First, a group of roosters were exposed to an environment where it was light for twelve hours, then dark for twelve hours, repeating for two weeks. As many have previously posited, the roosters really did anticipate the light, generally starting their pre-dawn crowing around two hours before the light was to turn on.

Another interesting observation was that the most dominate rooster was the one who would start the crowing off, lending credence to the idea that crowing is about marking territory and asserting dominance. As Yoshimura stated, “Our preliminary data suggest that the highest ranked rooster has priority in breaking the dawn, and lower [ranking] roosters are patient enough to wait and follow the highest ranked rooster each morning.”

In a second experiment, roosters were exposed to a constant, near-dark environment 24 hours per day. Despite this, Yoshimura and his colleagues noted that the roosters quickly settled into a “23.8 hour day” and would begin crowing the same time every day, just before dawn. The lighting didn’t seem to factor in.

Going further, when Yoshimura’s team tried to trick the birds by randomly exposing them to bright lights or loud sounds at various times, while this did induce some crowing, they consistently responded more strongly to the stimuli (crowed more) when it occurred around what would normally be dawn.

Yoshimura et al. concluded that the birds must have an internal body clock that tells them when to crow. Furthermore, due to the fact that roosters can’t be tricked into crowing at other times of day as strongly as they do around dawn, the researchers concluded that their “internal clocks take precedence over external cues.”

As for why roosters seem to love to crow in the mornings, this isn’t fully understood, but is thought to be tied with the aforementioned notion of crowing being primarily about announcing territory and where a particular rooster sees itself on the pecking order.  This would also explain why roosters seem to crow in response to things like the sound of cars; they assume that such noises must be a potential rival and respond in kind. Similarly, when being given food, the crowing acts as a way for them to assert that it’s their food. And, of course, in the morning after a good night’s rest, they are re-announcing to the world their presence at the first opportunity.