The Invention of the Pencil Sharpener 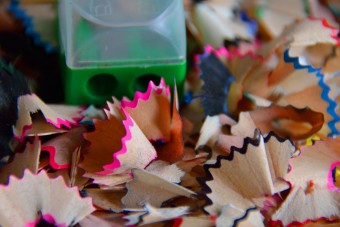 For years, the knife was the most commonly used tool to sharpen the wooden writing instrument known as a pencil (which historians believe was invented in the 15th or 16th century). But whittling the wood away to eventually produce a point was a time-consuming, tedious, and inexact process. As pencils became more ubiquitous in everyday life, it became apparent that a faster and more efficient way was needed to sharpen them. Luckily, two Frenchmen were up to the challenge.

On October 20, 1828, Parisian mathematician Bernard Lassimone applied for and was issued French patent number 2444 for his invention of the “taille crayon,” translated to English as “pencil sharpener.” A year after receiving a patent, the “taille crayon” was advertised in the Le Constitutionnel, an influential political and literary newspaper out of Paris, as the preferable way to sharpen pencils. It employed two small metal files tilted at ninety degrees in a block of wood that worked to whittle, scrape, and grind the wood off the pencil to create a tip. Though this was the first mechanical pencil sharpener, it wasn’t much faster, nor less work, than just using a knife.

About ten years later, in 1837, the British picked up on this sharpening fad. Cooper and Eckstein’s “patent pencil pointer” debuted in The Mechanic’s Weekly, a scientific weekly founded and edited by Joseph Clinton Robertson. They named their invention the “Styloxynon” and it was pretty close to Lassimone’s sharpener in its description, “two sharp files neatly and firmly set together in right angles in a small block of rosewood.” It was actually given the branded content treatment in The Mechanic’s Weekly with the writer (who presumably was Robertson, considering he wrote most of the content in the magazine) saying, “From great personal convenience, I have myself experienced in the use of the ingenious little instrument… I feel assured that I shall be rendering an important service to all such of your numerous readers as are draughtsmen, by introducing it to their notice through the medium of your pages.”

Then again, at the end of the page advertisement, it reads, “When a new pencil is first used, it should be roughly pointed with a knife before employing the Styloxynon.

Needless to say, a better pencil sharpener than the Styloxynon was still needed.

A decade after the Styloxynon, another Frenchman, Therry des Estwaux, designed something we still use today in pencil sharpeners. Estwaux invented a conical-shaped device that, when a pencil was inserted and twisted, all sides of the pencil were whittled away at once, make the sharpening process much quicker. Today, it is known as a prism sharpener. From that point on, sharpeners using a conical-shaped device began popping up throughout Europe, though with slight design changes from Estwaux’ sharpener. They were also used in offices across the world. In fact, the Early Office Museum tracked down documentation that showed the New York City municipal government purchased mechanical pencil sharpeners for their offices as early as the winter of 1853 from an English company for one dollar and fifty per sharpener (about $42 today). As the demand for pencil sharpeners grew, so did the need to mass produce them to get the price down. 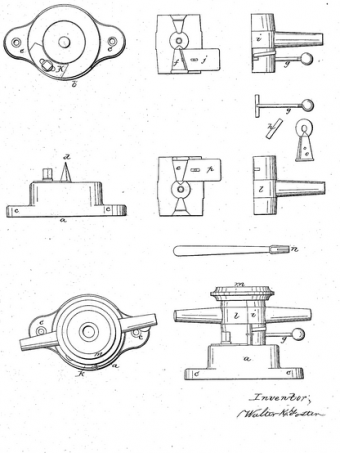 Enter Walter K. Foster, who, according to many sources, patented the first American pencil sharpener in 1851, complete with an improvement on the original conical design, so that it could be more easily mass produced. However, upon further research, we could find no patent under Walter Foster until 1855, which is actually under “Waltee K. Fostee” (though that is a typo). The patent, US 12722, is for “Improvement in molds for casting pencil-sharpeners,” and it describes how to properly create molds in order to mass produce the device.

By 1857, a report in a trade journal stated that Foster and his employees were churning out over 50 gross (7,200) of the sharpeners per day due to the “the demand for export to Europe increasing every day.” By 1860, The Practical Draughtsman’s Book of Industrial Design out of France was admitting that now “the Americans supply us with something simpler and cheaper.” 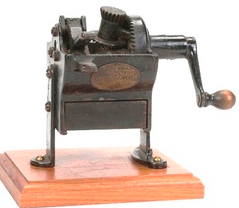 Designed sort of like a monorail paper cutter, the user inserted a pencil into a “chuck” – a mounted wood holder – as two milling disks “revolved around their axis as they orbited the tip of the pencil.” After a few moments, one had a perfectly sharpened pencil. In 1904, the Olcott Pencil Sharpener utilized a cylindrical cutting head for cleaner cuts.

Around the same time as the A.B. Dick Planetary Pencil Pointer, a man in Falls River, Massachusetts noticed a different need in relation to the pencil sharpener. John Lee Love was a carpenter by trade, so he always had a need for a pencil. He needed a sharpener that was portable, easy-to-use, and wouldn’t make a mess. So, he designed and patent his own. 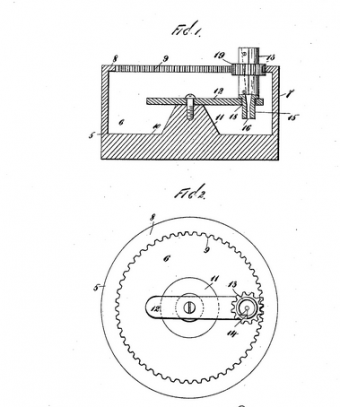 Under US patent #594114, simply titled “pencil sharpener,” the patent describes a simple, light-weight, crank-powered pencil sharpener that caught the shavings. Plus, as it is written in the patent, it could also act as a “as a paper-weight, desk ornament, and for other and similar purposes.” This sharpener was eventually called the “Love Sharpener.”