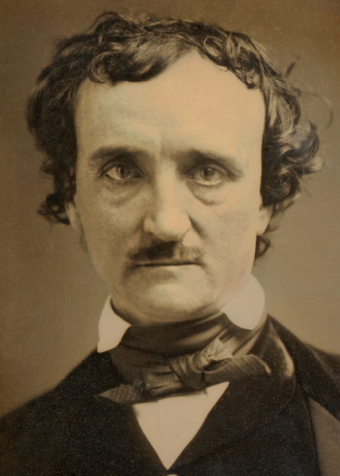 The tumultuous life of Edgar Allan Poe, the American writer, editor, and literary critic, began in Boston, MA on January 19, 1809. Poe was one of the early architects of detective fiction and is also considered a major contributor to the birth of science fiction. He was also among the first well-known American authors of fiction to attempt writing as a full-time job, resulting in a life of eating whatever the 19th-century equivalent of ramen noodles was.

The child of two actors, Poe never knew his parents. His father abandoned the family early on, and his mother died when he was a toddler. After her death, Edgar was taken in by a wealthy tobacco merchant and his wife, John and Frances Allan, in Richmond, VA. Edgar and Frances got along fine, but he never warmed to John, and the feeling was mutual.

Money was a main bone of contention between the pair. When Poe was studying at the University of Virginia, he claimed Allan wasn’t sending him enough money to cover the costs of tuition and books. He also claimed he was “forced” to gamble in the hopes of raising the extra money, but this only pushed him further into debt. Feeling there was nothing for him in Richmond, especially since his fiancé had dumped him, Edgar headed back up north.

Poe did two important things in 1827. He published his first book, “Tamerlane and Other Poems”, and he joined the army. A second collection of his poetry was published in 1829, the year before he was accepted into the prestigious military academy, West Point. Poe excelled during his time there, but after a year he was booted out for handling his duties poorly (most likely intentionally, trying to get kicked out.) During this time, Poe severed contact with his foster father John Allan for good.

After leaving West Point, Poe put all his energy into writing. After bouncing around the northeast for a bit, he ended up staying in Baltimore with his aunt Maria Clemm and his cousin Virginia from 1831 to 1835. Virginia became his muse and the love of his life. They got married in 1836 when she was 13 years old, pre-dating Jerry Lee Lewis’ under-age cousin-marrying scandal by well over 100 years. (Note: contrary to popular belief, marrying such a young woman was never the norm. See: When Did Teen Girls Stop Commonly Getting Married?)

Poe took a job as a literary critic for a magazine called the Southern Literary Messenger in 1835 where he wrote scathing, cut-throat reviews of his fellow authors. His time there was brief, probably just as much due to his abrasive personality as his hard-hitting reviews.

In the late 1830s, he began to hit his stride as a storyteller. “Tales of the Grotesque and Arabesque” was published, which contained some of Poe’s best short stories including “The Fall of the House of Usher.” In 1841, the spine-tingling “Murder on the Rue Morgue” was released, and the genre of detective fiction was born. The suspenseful “The Tell-Tale Heart,” one of his best known short stories, was published in 1843.

But it was in 1845 that Poe became a literary sensation with the publication of “The Raven,” considered one of the best works of American literature and (arguably) the high mark of Poe’s career. It explored the gothic themes of death and loss, so popular at the time. He was paid only $9 upon its release. Around this time he also penned the classic tale “The Cask of Amontillado,” and the poem “The Bells.”

When Virginia died of what we now know was tuberculosis in 1847, Edgar was completely devastated. Although he tried to continue to work, his grief, poor health and substance abuse issues made it a constant struggle.

On October 3, Poe was found on the street in Baltimore and was taken to the hospital. He wasn’t coherent enough to explain how he ended up there or what was wrong with him. All he managed to say was, reportedly, “Lord, help my poor soul.” He died on October 7, 1847. No exact cause of death has ever been determined.

After his death, Poe suffered the indignity of posthumous mudslinging from a literary rival named Rufus Griswold. Mr. Griwold had been on the receiving end of at least one of Poe’s epically critical reviews and waited until he was dead to exact his revenge. He didn’t waste any time – he portrayed Poe in his obituary as a deranged, alcoholic, womanizing nutjob.

Griswold also rushed to write the first biography of Poe, and his mean-spirited misconceptions have been, and are, what most people believe about Edgar Allan Poe. Clearly Poe has issues, but most historians think that the crazed, drug-and-boozed fueled maniac we’ve been led to believe he was is very likely hyperbolic nonsense.