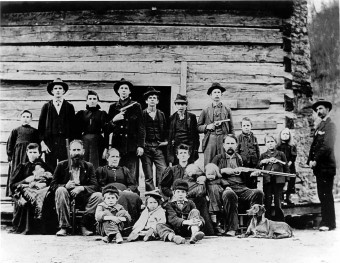 As with a lot of historical events, Hollywood has glamorized and largely fictionalized the feud between the Hatfields and the McCoys. So what really happened?

It is believed that both families came to America before it was even America. The Hatfields were among the first pioneers to make their way to this new land from the shores of Yorkshire in northern England. The first Hatfield was Matthias Heathfield, who settled in New Haven, Connecticut around 1660. It would seem that the name was slightly altered by Matthias’ descendents, either his children or grandchild, to forever be “Hatfields.”

The McCoys came from Scotland, but would move to Ireland, before coming to the new world. The first known McCoy in America was John McCoy, who moved there with his wife (and possibly two brothers) in 1732 by way of Belfast, Ireland. With a 150 acre land grant in hand, John, and whatever family was with him, settled in Charles County, Maryland. He died in 1760 as a very prominent land owner.

The first Hatfields to move to the Tug Valley region, the site of the historic feud, was Ephraim Hatfield and his second wife, Ann Musick, along with their ten children around 1820. They came from southwestern Virginia, looking for open land to settle and farm on. He was nicknamed “Eph-Of-All” due to the fact that every Hatfield in the region would be descended from him. His son, Valentine, was already grown by then and produced his own child, one of which was named after his father, but given the nickname “Big Eph” due to his six foot four and 240 pound frame. Big Eph’s son would be William Hatfield, otherwise known as “Devil Anse” and a main character in the Hatfield & McCoy saga.

William McCoy (son of John) moved with his 12 kids and wife to the Tug Valley region around 1802-1804. As the children got older, they began to populate both sides of the river, on the Kentucky and West Virginia side. His granddaughter was Sarah “Sally” McCoy, who would end up marrying her cousin (the son of her great uncle), Randall McCoy. They would be the patriarch and matriarch of the McCoy clan during the feud.

The first shot fired in the Hatfield & McCoy story was the murder of Asa Harmon McCoy, but there were other factors that helped the pull the trigger. The Tug Valley region was full of natural resources, most notably timber. With war production and the specter of industrialization coming after the war, timber was a extremely valuable commodity, along with the land it resided on. Additionally, both clans (especially the McCoys) were distrusting of other families due to their isolation, so much so that they often ended up marrying within the family. William Hatfield was about 15 years younger than Randall McCoy and, by 1880, was significantly better off financially than Randall due to his successful timber business. While McCoy owned land, farm, and a small timber operation, there was harbored resentment towards the Hatfields.

Asa Harmon McCoy, the younger brother of Randall, arrived back to the Tug Valley region in January 1865 after being medically discharged by the Union Army on account of a broken leg. In this part of the country, being a Union soldier was not something admired. The Logan Wildcats, a guerrilla militia group, “protected” this region and was headed up by Devil Anse Hatfield himself. But the animosity between Harmon McCoy and Hatfield was much more personal. Harmon McCoy was ordered by his Union commander to fight Devil Anse, due to the belief that he was a Confederate spy. Harmon lost the fight, but the Union troops went after Devil Anse anyway. Later, Harmon would shoot a friend of Devil Anse while stealing his horse. In turn, Devil Anse killed Harmon’s commanding officer, General Bill France, while he urinated off his front porch. In January 1865, there was a rumor circulating that Harmon was going to kill Devil Anse himself for killing General France. That rumored ended when Jim Vance, Devil Anse’s uncle and member of the Logan Wildcats, shot Harmon while he walked home to his family that he hadn’t seen in years.

In truth, some historians believe that this event didn’t start the feud, but rather was more of an isolated incident or, even, a murder agreement. Many in the McCoy family didn’t like Harmon either, due to his allegiance to the Union cause. Frankly, while the Hatfields and McCoys didn’t like each other very much, they liked the Union and President Lincoln even less.

In 1878, thirteen years later, a stolen pig added fuel to the fire between the Hatfields and McCoys. In the southern Appalachian region, food was scarce. A full-grown razorback provided meat and was a huge trade chip within the economy. According to Dean King’s book The Feud, a razorback “was where their next meal was going to come from, and how they could feed their children in the winter. If they were lucky enough to have one for sell or trade, the proceeds were used to acquire flour, sugar, and coffee or sometimes shoes or boots for their families. It was a mainstay for their family.” Needless to say, hog stealing was a big deal.

In the winter of 1878, Randall McCoy thought he was missing a prized razorback and followed the tracks to Floyd Hatfield’s place (who was also related to Randall McCoy’s wife). When questioned, Hatfield insisted it was his razorback, despite the earmark being nonexistent or indistinguishable (hog’s earmarks usually could determine whose pig it was). Randall McCoy was infuriated and took the matter to the Justice of Peace, Preacher Anse Hatfield (a cousin of Devil Anse – everyone was related).

A “jury of peers” was set up with six Hatfields and six McCoys. In the end, the final verdict depended on the testimony of McCoy’s nephew, Bill Staton. He said the pig belonged to Hatfield.

A McCoy on the jury ended up siding with the Hatfields and by a 7-5 vote, the razorback belonged to Floyd Hatfield. A few months later, Bill Stanton was killed by two McCoys and the feud turned bloody.

In August 1882 (on Kentucky election day), three of Randall’s sons attacked, stabbed 26 times, and shot to death Devil Anse’s younger brother, Ellison Hatfield. Apparently, the attack was unprovoked. They were arrested, but were kidnapped on the way to trial by Hatfields. Instead of a trial, the three McCoy brothers were tied to pawpaw bushes and shot to death. The Hatfields, including Devil Anse, eluded arrest.

It all came to a head on January 1, 1888, when a big group of Hatfields raided the McCoy’s camp, setting it on fire, and killing three or four McCoys (depending on who was asked), including Alifair McCoy, daughter of Randall, and Sara McCoy, the wife of Randall. This became known as the New Years’ Night Massacre. In response, nine Hatfields were taken to trial for the murders; seven received life imprisonment and an eighth was hung.

With this final act of violence, a truce was ordered by both families in 1891. Trials continued until 1901 with even the United States Supreme Court getting involved. All in all, over an eleven year period (1880 to 1891), nearly two dozen people were killed combined from both families. The violence earned the Hatfields and McCoys legendary status as America’s go-to feud, something that has continued to this day.