Pieces of Eight and Two Bits

December 24, 2014 Melissa Leave a comment
Michael A. asks: Why is “two bit” something cheap? Thanks! 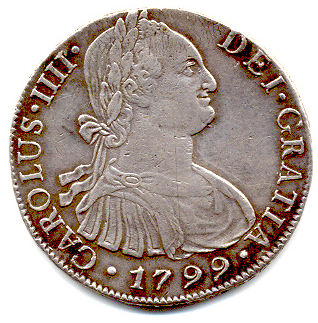 There was a time in America when rather than U.S. dollars or British pounds, most people bought and sold with Spanish coins.

During the 18th century, gold and silver were precious commodities. No active mines were operating in British North America, and Britain was keeping a tight hold on its own precious metals, leaving little for the colonists. However, America’s neighbors to the South were swimming in the stuff, and even though Mexico was printing its own coins, the dominant form of currency in the original 13 was that of Spain, with its dollar or peso (equal to 8 reales, thus it was known as “pieces of eight”), and smaller denominations the medio peso (equal to 4 reales) and peseta (equal to 2 reales).

This method of dividing the dollar into eight pieces had a lasting impact on American currency, since, like the medio peso, the United States has a half-dollar, and like the peseta, there is that favorite of parking meters and laundry mats, the quarter-dollar.

As part of the transition, the unit of account, at least colloquially, changed from real to “bit” in the U.S., and, thus, the quarter dollar, or quarter as we call it today, which was equal to two reales, came to be known as “two bits.”

Compare that with today’s prices at New York’s Carnegie Deli, and you begin to understand how two bits lost our respect. Today at the famous delicatessen, a plate of pickled herring costs $7.99 (about 32 bits), a bowl of chicken noodle will set you back $8.99 (about 36 bits), a roast beef sandwich (although I’m told the pastrami is the specialty) is $17.99 (a whopping 72 bits), and a piece of apple pie, albeit deep dish, costs $9.49 (about 38 bits).

So early on “two bit” wasn’t a pejorative, but somewhere along the way, presumably as prices increased via inflation while the value of a bit did not, the negative connotation came.

In any event, by the 1930s, the negative meaning had started to take hold. One early example can be seen in a rather crude line from Caldwell’s 1932 Tobacco Road: “She used to be a two-bit slut.”