December 16, 2014 Karl Smallwood
Mark. K. asks: Why does peanut butter stick to the top of my mouth? 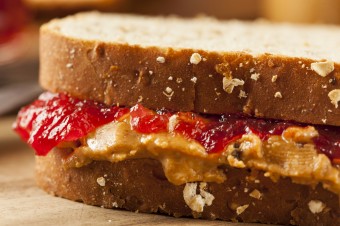 Arachibutyrophobia is a proposed humorous name for the fear of peanut butter getting stuck to the top of your mouth, coined by Charles M. Schulz in a 1982 edition of his famed Peanuts comic strip. But why does peanut butter have such a tendency to get stuck in your palate when so many other foods don’t?

As it so happens, peanut butter contains a perfect storm of ingredients seemingly designed with the express intent of creating a peanut flavoured choking hazard. For starters, peanut butter, shockingly enough, contains a lot of peanut oil, which makes it incredibly difficult for your saliva to perform its normal task of helping in this first stage of processing food; as we all know, oil and water don’t really like to mix.

Peanut butter also contains a lot of protein (about 25% by mass, give or take depending on the brand). Protein has a tendency to soak up moisture via osmotic pressure, thus absorbing much of the saliva in your mouth. This effect is made worse than with most foods due the fact that peanut butter also has incredibly low water content (only about 2%. For reference, jerky, which is by its very definition “dried meat”, tends to have a water content of about 23%.)  It’s also worth noting that bread can similarly absorb some of the moisture from your mouth, which combined with the peanut butter, can leave your mouth incredibly dry when eating a peanut butter sandwich.

But wait, there’s more. In addition to the oil and lack of moisture to wash down the peanut butter with, there’s a process in the food industry known as “supercritical fluid extraction” which uses CO2  to separate chemicals and compounds. SFE can be used for a multitude of tasks in the food industry, like decaffeinating coffee and extracting essential oils and flavours from plants and foods. In regards to peanuts specifically, it can be used during the manufacturing process of peanut butter to help keep the oils and solids from separating without the need for other more traditional stabilizers like unhealthy hydrogenated oils. And, as this paper in the Journal of Food Science explains, one side-effect of SFE in peanut butter manufacturing is that it increases the relative “adhesiveness” of the peanut butter.

Another thing that makes peanut butter so deliciously sticky is its texture, or lack thereof. Smooth peanut butter is noted as being far more likely to stick to the roof of your mouth than the chunky kind because the smooth, thick, deliciously creamy surface can form a “suction cup” of sorts that can anchor the peanut paste to a person’s palate. Have you ever got your foot stuck in mud?  Same type of thing here.