This Day in History: December 9th- The Separation 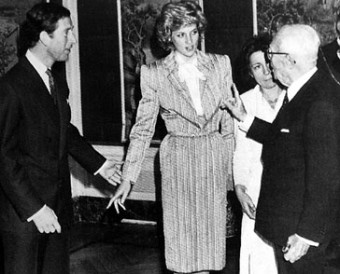 “’Well, there were three of us in the marriage so it was a bit crowded.”- Princess Diana

It was an announcement that would have been no surprise at all had they been any other British couple. Even after all the very public tiffs and extramarital dalliances, the House of Commons let out a groan of surprise/sadness when British Prime Minister read a statement prepared by Diana and Charles on December 9, 1992. They assured the public that:

Despite their separation, the Prince and Princess of Wales did not intend to divorce and would continue to carry on their royal and constitutional duties separately as the future king and queen of England.

The couple added they would both play equal roles in the upbringing of their sons, Prince William and Prince Harry. Since Charles and Diana had already been living separate lives for several years; the announcement was merely a formality. Charles officially settled in at his country home, Highgrove (located near his old “friend” Camilla Parker Bowles), while Diana, always the city girl, remained at Kensington Palace in London.

But instead of calming the waters between them, the tension only grew. They appeared annoyed during official engagements, gave ill-advised interviews where they took pot-shots at each other, didn’t even bother to hide extramarital discretions (especially Charles), and in general behaved in a decidedly un-royal manner. The Queen, as always, showed the world an unflappable, dignified façade, but must have been less than thrilled that three out of her four kids’ marriages had tanked.

Her Majesty had finally tired of the Princes and Princess of Wales’ shenanigans by early 1996. She took the unprecedented action of ordering the couple to divorce before they could do any more damage the already floundering monarchy. Diana was hesitant at first, but finally acquiesced after hammering out a very favorable settlement.

Diana would walk away with a lump sum payment of $23 million, the jewelry she acquired during her marriage, and her lavish apartment in Kensington Palace. She did forfeit her royal status, and would from that point on be known as Diana, Princess of Wales (no H.R.H. for you!) and lost any claim to the throne.

The fairytale marriage between the Prince and the beautiful Lady (did it ever really exist?) ended in a hodge-podge of accusations, bitterness, and bad vibes.

The Princess of Wales was killed in a car accident a year after the divorce became final. People all over the world mourned the “Queen of Hearts”, and the Royal family had no choice but to give Diana a royal funeral – or face the wrath of their subjects.

And Charles had no choice but to wait a respectable amount of time before he was seen out and about with Camilla Parker Bowles, the true love of his life that caused Diana so much anguish. They were finally quietly married on April 9, 2005, and Camilla is styled as the Duchess of Cornwall. Taking over Diana’s title would be pushing it a bit from a publicity standpoint.