This Day in History: December 1st- The Back of the Bus 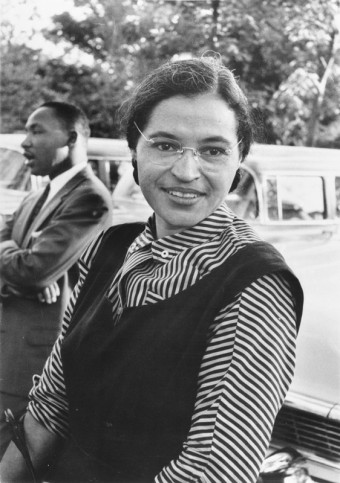 When Rosa Parks, a 42-year-old African American seamstress, climbed aboard a bus in Montgomery, Alabama on December 1, 1955, she had no intention of striking a blow for the civil rights movement. After a long shift at work, Parks just wanted to get home to her family and unwind from her day.

The first ten rows of seats on the bus were reserved for white passengers, so Rosa sat down in the next row. After making several stops, the bus became crowded. The driver told Mrs. Parks and three other black people seated in the same row that they would have to vacate their seats for incoming white passengers boarding the bus.

The three other passengers moved as they were instructed to, but Rosa refused, pointing out she was not occupying a seat reserved solely for whites. The rules were unclear on that issue, but the bus driver, James F. Blake, believed he had the authority to make the call. When Mrs. Parks still quietly, but firmly, refused to move to the back of the bus, he called the police.

Although the incident was obviously not premeditated, Rosa Parks was a member of the NAACP and active in the civil rights movement, so clearly this had some bearing on her actions. She later remembered, “When I made that decision, I knew that I had the strength of my ancestors with me.”

Mrs. Parks was taken into police custody and charged with violating Chapter 6, Section 11 of the segregation law of the Montgomery City code, which was enacted in 1900.

There were others before Rosa Parks who had been prosecuted for disobeying Montgomery’s segregation laws on city buses.  For instance, nine months before in Montgomery Alabama a 15 year old girl, Claudette Colvin, did the exact same thing and was arrested and convicted.  However, Parks’ case presented a better opportunity to publicly challenge the Montgomery City segregation code, because the 15 year old girl was pregnant out of wed lock and had created a disturbance when arrested; so her case was deemed unsuitable to be the “face” of the challenge of the law with the media, though it was argued before the Supreme Court as well as Parks’ case.  Parks, on the other hand, had gone quietly, was married, had a job, was educated, had a clean record, was politically active, was the secretary of the Montgomery chapter of the NAACP, and was respected around town, even by many white people.

As such, her arrest galvanized the African American community to organize a bus boycott in protest of the discrimination they had endured for far too long.

The young minister of the Dexter Avenue Baptist Church, Martin Luther King, Jr., first attracted national attention during the 381-day peaceful boycott due to his leadership skills and inspiring oratory. And since African-Americans made up 75 percent of the city’s bus passengers, the boycott made a huge economic and social impact.

After her conviction, Rosa’s lawyer filed an appeal. While it was still being decided, the Supreme Court ruled in another case on June 4, 1956 that the segregation laws were unconstitutional. And with that ruling, the Supreme Court banned segregation on public transportation, and Rosa Parks became forever known as the “Mother of the Civil Rights Movement.”