September 29, 2014 Melissa
Mark R. asks: Why does wet hay that is bailed catch on fire? 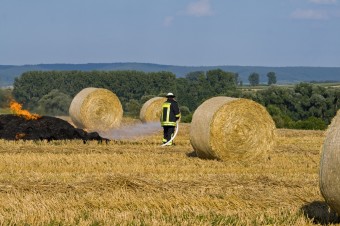 Plant reactions and bacterial growth combine to raise temperatures in even the driest hay bales, although most never catch fire on their own. However, when hay is packed tightly, and enough moisture gets in, the conditions may be right for spontaneous hay combustion.

How does this work? Bacteria thrive when sufficient glucose (a simple sugar found in plants) is available. In the process of breaking it down into energy, aerobic bacteria catabolize the glucose, turning it into a usable form. Through the process of respiration, these bacteria completely oxidize the glucose – transforming it into carbon dioxide, water and energy. This last is released as heat.

Likewise, even after it’s cut, the cells in the hay plant itself are still active, also respiring, and in a similar process to the bacteria, converting glucose into CO2, H20 and energy – which is also released as heat.

The presence of both heat-generating processes can be innocuous as long as hay is properly stored with an appropriate moisture concentration. According to both the University of Minnesota Extension and the Washington State University Extension, the ideal moisture content for baling and storing is at 15% moisture or less.

However, once the moisture content increases to over the 15% threshold, mesophilic (warm-loving) bacteria begin to thrive, as sufficient water is now present for them to dissolve and absorb nutrients. Needing only to split in two to reproduce (binary fission), in optimal conditions, the population of a community of bacteria can double in about 10 minutes. And as each hungry little cell consumes a bit of the glucose which is everywhere around them, the amount of heat generated can increase pretty quickly.

Since even dew and fog can increase the moisture content of hay, most recommendations for preventing hay fires relate to careful monitoring – particularly of the internal temperature of the bale or stack.

External warning signs of a high internal temperate are often created by evaporation (particularly when hay is stored indoors). More than just observing steam rising from a bale (although if you do – take action immediately), condensation on the roof and eaves of the barn also indicate the presence of steam (and heat and too much moisture). Molds often start to grow in these conditions and produce a telltale acrid, tobacco type odor which is a clear warning sign, as well.

Even without these signs, experts recommend internal temperatures be taken regularly, and even without a proper thermometer, this is easier than it sounds. Simply insert an iron bar into the stack as deep as you safely can, getting it as close as possible to the middle. Leave it for two hours. When you retrieve it, if you have difficulty holding it due to heat, the temperature is in excess of 130 Fahrenheit and action must be taken. If it is too hot to hold, the haystack has already reached 150F – nearing the temperature at which spontaneous combustion of the hay will occur.

Ironically, the moisture that allowed for the explosive microbial growth that created the excess heat begins to disappear as the increasing population uses it up – all while releasing heat and increasing the internal temperature of the stack. At this point, a new type of bacteria (exothermic or heat-resistant) “start a process of chemical change that rapidly increases temperatures to the point of spontaneous combustion.”

Even without apparent flames, at these high temperatures experts recommend first calling the fire department, and then moving out nearby items and animals. If possible to do so without injury, surrounding bales that are not aflame may be moved, and it is recommended that these be spread out, to increase airflow and encourage heat loss. Be careful, however, as the removal of bales will introduce more oxygen to the internal bales which may already be afire.

Using this process, firefighters in La Junta, CO, for instance, in one fire were able to save approximately $180,000 worth of hay, even though other portions of the stack (estimated at $30,000) burned for more than 10 hours.

Not everyone is so lucky, and in September 2013, a fire in Yolo County, CA became a massive four-alarm inferno that could be seen for miles. Rather than use the enormous amount of water required to extinguish it, they let it burn itself out and simply attempted to contain the fire. In the end, though, it consumed 10 acres of hay, along with other structures and equipment; the total damage was estimated at $6 million.