How are Baby Carrots Made? 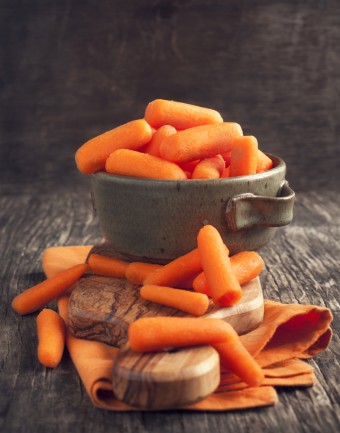 Unlike cut baby carrots, farmers grow “true” baby carrots to be naturally small, or other times they are simply carrots harvested before they get a chance to completely mature. “True” baby carrots bear the same cone shape as a normal sized carrot while only being a fraction of the size. A number of farmers produce these type of baby carrots when they thin their crops during the growing season by removing a certain percentage of immature carrots. However, other farmers purposefully harvest entire crops of carrots young in order to sell the baby carrots with their green stems attached. That little detail allows growers to prove that their baby carrots are “true” baby carrots rather than carrots cut to look miniature.

The majority of baby carrots sold in supermarkets are not this type, but are manufactured to look a certain way. The baby carrots that we know today didn’t arrive in stores until 1989. Successful carrot farmer Make Yurosek operated a farm and processing plant in California, and he believed that there had to be a better way to use the 400 tons of carrot cull that his plant processed per day. Cull carrots couldn’t be sold in supermarkets because they had issues such as being broken or too misshapen. There were times when as much as 70% of the day’s processed crop ended up culled.

To solve the issue, in 1986, Yurosek experimented in creating smaller carrots from the cull, using an industrial potato peeler and a green bean slicer. When he sent them to a large west coast supermarket chain to see what they thought, he received a positive response. “I said, ‘I’m sending you some carrots to see what you think…Next day they called and said, ‘We only want those.’”

The process of manufacturing baby carrots has been refined and streamlined in the years since Yurosek first created them. At Grimmway Farm, one of the United States’ top carrot producers, full-size carrots are planted close together in an effort to have them grow straight and minimize the amount of carrot that will need to be trimmed later on in the process. Then, a mechanical harvester harvests the carrots and they are transported to the processing facility where workers use hoses and water to force the carrots out of the truck.

The carrots are then washed into the processing facility on luges. The luges, and the water, serve a dual purpose: washing off the loose dirt and sanitizing the carrots with trace amount of chlorine in the water. Next, the carrots are sorted before being cut into 2 inch sections. Grimmway Farm then stores the carrots for one to five days before peeling them and rounding the edges in a spiral slide made up of a grated surface. Finally the carrots are sorted one last time before being packaged up and shipped to stores. The extra carrot bits ground off during the peeling process either end up as cattle feed or become compost.

Concern arose over the past few years about the use of chlorine in the manufacturing of baby carrots. A deluge of chain-emails were sent about claiming that the baby carrots were soaked in a chlorine bath and that the white blush that appears on the surface is the chlorine coming to the surface. In response, Bolthouse Farms, the other top producer of carrots in the United States and largest producer of baby carrots worldwide, created a website  in order to refute the rumors.

The truth is that the process is regulated by the FDA and the amount of chlorine in the water is approximately 90% less than the chlorine level in regular tap water. That minute amount of chlorine sanitizes the carrots to prevent consumers from contracting foodborne illnesses such as E. coli and Listeria. Additionally, the white blush on carrots comes from dehydration, rather than chlorine seeping to the surface.   Soaking the carrots in water for a time will typically cause the bright orange color to return.