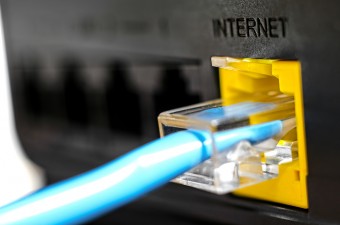 While the World Wide Web was initially invented by one person (see: What was the First Website?), the genesis of the internet itself was a group effort by numerous individuals, sometimes working in concert, and other times independently.  Its birth takes us back to the extremely competitive technological contest between the US and the USSR during the Cold War.

To coordinate such efforts, a rapid way to exchange data between various universities and laboratories was needed. This bring us to J. C. R. Licklider who is largely responsible for the theoretical basis of the Internet, an “Intergalactic Computer Network.” His idea was to create a network where many different computer systems would be interconnected to one another to quickly exchange data, rather than have individual systems setup, each one connecting to some other individual system.

He thought up the idea after having to deal with three separate systems connecting to computers in Santa Monica, the University of California, Berkeley, and a system at MIT:

For each of these three terminals, I had three different sets of user commands. So if I was talking online with someone at S.D.C. and I wanted to talk to someone I knew at Berkeley or M.I.T. about this, I had to get up from the S.D.C. terminal, go over and log into the other terminal and get in touch with them…. I said, oh man, it’s obvious what to do: If you have these three terminals, there ought to be one terminal that goes anywhere you want to go where you have interactive computing. That idea is the ARPAnet.”

So, yes, the idea for the internet as we know it partially came about because of the seemingly universal human desire to not have to get up and move to another location.

With the threat of a nuclear war, it was necessary to decentralize such a system, so that even if one node was destroyed, there would still be communication between all the other computers. The American engineer Paul Baran provided the solution to this issue; he designed a decentralized network that also used packet switching as a means for sending and receiving data.

Many others also contributed to the development of an efficient packet switching system, including Leonard Kleinrock and Donald Davies. If you’re not familiar, “packet switching” is basically just a method of breaking down all transmitted data—regardless of content, type, or structure—into suitably sized blocks, called packets. So, for instance, if you wanted to access a large file from another system, when you attempted to download it, rather than the entire file being sent in one stream, which would require a constant connection for the duration of the download, it would get broken down into small packets of data, with each packet being individually sent, perhaps taking different paths through the network.  The system that downloads the file would then re-assemble the packets back into the original full file.

The first use of this network took place on October 29, 1969 at 10:30 pm and was a communication between UCLA and the Stanford Research Institute. As recounted by the aforementioned Leonard Kleinrock, this momentous communiqué went like this:

We set up a telephone connection between us and the guys at SRI… We typed the L and we asked on the phone,

Then we typed the G, and the system crashed… Yet a revolution had begun.

By 1972, the number of computers that were connected to ARPANET had reached twenty-three and it was at this time that the term electronic mail (email) was first used, when a computer scientist named Ray Tomlinson implemented an email system in ARPANET using the “@” symbol to differentiate the sender’s name and network name in the email address.

Alongside these developments, engineers created more networks, which used different protocols such as X.25 and UUCP. The original protocol for communication used by the ARPANET was the NCP (Network Control Protocol). The need for a protocol that would unite all the many networks was needed.

In 1974, after many failed attempts, a paper published by Vint Cerf and Bob Kahn, also known as “the fathers of the Internet,” resulted in the protocol TCP (Transmission Control Protocol), which by 1978 would become TCP/IP (with the IP standing for Internet Protocol). At a high level, TCP/IP is essentially just a relatively efficient system for making sure the packets of data are sent and ultimately received where they need to go, and in turn assembled in the proper order so that the downloaded data mirrors the original file.  So, for instance, if a packet is lost in transmission, TCP is the system that detects this and makes sure the missing packet(s) get re-sent and are successfully received.  Developers of applications can then use this system without having to worry about exactly how the underlying network communication works.

On January 1, 1983, “flag day,” TCP/IP would become the exclusive communication protocol for ARPANET.

Also in 1983, Paul Mockapetris proposed a distributed database of internet name and address pairs, now known as the Domain Name System (DNS).  This is essentially a distributed “phone book” linking a domain’s name to its IP address, allowing you to type in something like todayifoundout.com, instead of the IP address of the website.  The distributed version of this system allowed for a decentralized approach to this “phone book.” Previous to this, a central HOSTS.TXT file was maintained at Stanford Research Institute that then could be downloaded and used by other systems.  Of course, even by 1983, this was becoming a problem to maintain and there was a growing need for a decentralized approach.

This brings us to 1989 when Tim Berners-Lee of CERN (European Organization for Nuclear Research) developed a system for distributing information on the Internet and named it the World Wide Web.

What made this system unique from existing systems of the day was the marriage of the hypertext system (linked pages) with the internet; particularly the marriage of one directional links that didn’t require any action by the owner of the destination page to make it work as with bi-directional hypertext systems of the day.  It also provided for relatively simple implementations of web servers and web browsers and was a completely open platform making it so anyone could contribute and develop their own such systems without paying any royalties.  In the process of doing all this, Berners-Lee developed the URL format, hypertext markup language (HTML), and the Hypertext Transfer Protocol (HTTP).

Around this same time, one of the most popular alternatives to the web, the Gopher system, announced it would no longer be free to use, effectively killing it with many switching to the World Wide Web. Today, the web is so popular that many people often think of it as the internet, even though this isn’t the case at all.

Also around the time the World Wide Web was being created, the restrictions on commercial use of the internet were gradually being removed, which was another key element in the ultimate success of this network.

Next up, in 1993, Marc Andreessen led a team that developed a browser for the World Wide Web, named Mosaic.  This was a graphical browser developed via funding through a U.S. government initiative, specifically the “High Performance Computing and Communications Act of 1991.″

This act was partially what Al Gore was referring to when he said he “took the initiative in creating the Internet.”  All political rhetoric aside (and there was much on both sides concerning this statement), as one of the “fathers of the internet,” Vincent Cerf said, “The Internet would not be where it is in the United States without the strong support given to it and related research areas by the Vice President [Al Gore] in his current role and in his earlier role as Senator… As far back as the 1970s, Congressman Gore promoted the idea of high speed telecommunications as an engine for both economic growth and the improvement of our educational system. He was the first elected official to grasp the potential of computer communications to have a broader impact than just improving the conduct of science and scholarship…  His initiatives led directly to the commercialization of the Internet. So he really does deserve credit.” (For more on this controversy, see: Did Al Gore Really Say He Invented the Internet?)

As for Mosaic, it was not the first web browser, as you’ll sometimes read, simply one of the most successful until Netscape came around (which was developed by many of those who previously worked on Mosaic).  The first ever web browser, called WorldWideWeb, was created by Berners-Lee.  This browser had a nice graphical user interface; allowed for multiple fonts and font sizes; allowed for downloading and displaying images, sounds, animations, movies, etc.; and had the ability to let users edit the web pages being viewed in order to promote collaboration of information.  However, this browser only ran on NeXT Step’s OS, which most people didn’t have because of the extreme high cost of these systems. (This company was owned by Steve Jobs, so you can imagine the cost bloat… ;-))

In order to provide a browser anyone could use, the next browser Berners-Lee developed was much simpler and, thus, versions of it could be quickly developed to be able to run on just about any computer, for the most part regardless of processing power or operating system.  It was a bare-bones inline browser (command line / text only), which didn’t have most of the features of his original browser.

Mosaic essentially reintroduced some of the nicer features found in Berners-Lee’s original browser, giving people a graphic interface to work with. It also included the ability to view web pages with inline images (instead of in separate windows as other browsers at the time).  What really distinguished it from other such graphical browsers, though, was that it was easy for everyday users to install and use.  The creators also offered 24 hour phone support to help people get it setup and working on their respective systems.