The Only Major League Baseball Team to Go Bankrupt: The Story of the Seattle Pilots 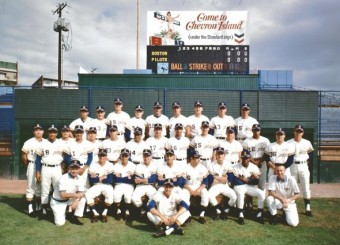 Few outside of Seattle remember or know anything about the Seattle Pilots, the only Major League Baseball team to go bankrupt. It started with such promise on April 11, 1969, when 17,000 Seattleites saw the Pilots open their first – and only – season with a seven to nothing win over the Chicago White Sox. As the Seattle Times’ headline put it the next morning, “Twas a Perfect Day, for Weather and Score.”

Less than 365 days later, on April 1, 1970 and mere days before the season was to begin, the Seattle baseball franchise packed up their things and moved to Milwaukee. It all happened so quickly that there wasn’t even time to get new uniforms. The new owners simply ripped off the Pilots’ name and logo and hastily replaced it with their new name, the “Brewers.” Why did the team go bankrupt? How did Major League Baseball let this happen? The answer lies in the murky mix of politics, business, and sports.

Just over hundred years earlier, on January 14, 1865, (which was several months before General Lee’s surrender at Appomattox) Seattle, Washington was incorporated as a city. Named after Chief Seattle, the crowded Pacific Northwest port town specialized in fish and timber. In fact, the term “Skid Row” is rumored to have originated in Seattle. Mill Street, so-called due to the timber mills that lined the street, played host to giant timber logs “skidding” down the street from mill to mill, waiting to be chopped and tended too. Some years later, during Prohibition, Mill Street became Seattle’s hub for brothels and speakeasies, drawing the ire of moralists. From here, the term “skid row” became associated with a city’s dark, seedy underbelly.

Such a tough town attracted tough characters and the businesses that employed them wanted to find something that would occupy their time other than woman and drinking. So, the companies formed baseball teams and paid their players to keep them out of trouble. On May 24, 1890, the Seattles beat the Spokanes 11 to 8 in the city’s first professional baseball game.

During the turn of the century and into the first quarter of the 20th century, baseball thrived in Seattle. This was mostly due to Daniel E. Dugdale, called “the father of Seattle baseball” by Seattle baseball historian Kenneth Hogan. A middling catcher himself (though he did make one appearance in the majors in 1886), he left his home state of Illinois in 1898, seeking his fortune in Alaska during the Klondike Gold Rush. He only made it as far as Seattle, soon creating the Seattle Braves in the Pacific Northwest League. They went on to win five minor league pennants, but more importantly, Dugdale and the team proved that baseball could thrive financially in Seattle. Dugdale built Dugdale Park in 1913, a double grandstand unlike any other baseball facility on the west coast, that attracted, along with the play on the field, fans by the thousands. Unfortunately, the stadium lasted less than twenty years, when on July 4, 1932, a fire (that some mistook as fireworks) completely destroyed the completely wooden stadium. Two years later, D.E. Dugdale, walking to his parked car, stepped off a curb and was struck by a Seattle City Light truck and killed. His team lapsed into bankruptcy. This wouldn’t be the first time this happened to a Seattle baseball team. Fortunately, at least this time around, Emil Sick was there to help.

Local Seattle brewery owner Emil Sick was good friends with New York Yankee owner Jacob Ruppert, who convinced him that buying a baseball team was a good investment. After all, what’s a better place to sell his beer than at the old ballpark? He purchased the team for $100,000 (about $1.6 million today) in December, 1937. After the sale went through, it was revealed to him that the team was in debt for another $150,000 ($2.4 million today). As one would imagine, Sick got a tad ill upon hearing this news.

Despite not being much of a baseball fan, Sick took great pride in the team. He renamed them the “Seattle Rainiers,” the name of his brewery, but also was a reference to Mount Rainier which laid about eighty miles south and slightly east of the city. Within a year, he had built Sick’s Stadium, the finest ballpark in the Pacific Coast League. The Seattle Rainiers immediately became the best drawing team in the PCL and the number one minor league team in the country in attendance. Sick was hailed as a Seattle savior and was named by the nationally recognized Sporting News as the minor league executive of the year. With the help of Emil Sick and the Rainiers, Seattle proved it could support a major league franchise.

In 1967, this came to fruition due the legendary and very grumpy owner Charles O Finley’s decision to move his team from Kansas City. After years of battling local K.C. politics, he was done with the town. He actually first considered Seattle as the place for his relocation due to its baseball tradition and beautiful port-centered city. He loved the city, but hated Sick’s Stadium, calling it a “pigpen” and saying it was “aptly named.” After thirty years, the stadium hadn’t aged well and its modern amenities were no longer modern. Ultimately, he chose Oakland as his team’s new home, but this decision set off a chain of events that would first lead to excitement among Seattle baseball fans and, then, despair.

Finley’s decision royally angered many back in Kansas City, most significantly Missouri Senator Stuart Symington. Symington threatened Major League Baseball that if his state’s biggest city didn’t get a team to replace the leaving A’s, he was going to introduce legislation that would revoke the league’s antitrust exemption, which would challenge the reserve clause – a clause that kept players under contractual control by the team. The owners knew their hand was being forced, but they had no choice. They weren’t about to give up the power the reserve clause gave them, so they awarded Kansas City a new team – the Royals. Additionally, in order to prevent an uneven amount of teams in the American League (which the Royals were now joining), baseball had to add an additional team. They choose the third-largest city in the west with an ownership group financially backed by former Rainier General Manager Dewey Soriano and former Cleveland Indians owner William Daley – the Seattle Pilots, named after William Boeing’s connection to Seattle (see “Bonus Facts”).

But Senator Symington was still not satisfied. Despite an earlier agreement that the teams would begin play during the 1971 season, over three years from the original agreement, Symington wanted a team playing in K.C. as soon as possible. So, with Major League Baseball again trying appease politics, the owners revised their earlier decision. The new American League franchises Kansas City and Seattle would throw their opening pitch in April 1969. Seattle, if they were ready or not, had baseball coming in 18 months.

Major League Baseball immediately placed conditions upon the city of Seattle and the team’s owners that were to be met by spring ‘69. First off, they had to update Sick’s Stadium to make sure it was no longer a “pigpen.” Baseball wanted the stadium to seat 30,000 people. Sick’s Stadium, at the time, only had seats for 11,000 fans. Additionally, baseball wanted a domed stadium in Seattle and demanded construction started by December 31, 1970. They never did met this last requirement – by December 31, 1970, the Pilots were no longer in Seattle.

This absurdly quick timetable and unrealistic demands set the franchise up for failure. Eventually, the owners convinced baseball to reduce the number of seats asked for to 25,000. Then, the project went way over budget, causing an agreement to be made that in order to get anywhere close to the original budget they had to have “less costly lighting, restrooms the smallest that would pass code, interior walls made out of plywood, and no built-in utilities for concession stands.”

All of this put pressure on the team to compete immediately, so when given the chance to select their players, they went for veteran, often past their prime, players in hopes that could win immediately. Players like Don Mincher, Tommy Harper, Gary Bell, Tommy Davis, Jim Bouton (the writer of the infamous baseball tell-all book, Ball Four), and Steve Harper were all former All-Stars. But there was a reason the word “former” was used. In order to further sell the product, they had uniforms that were extremely popular to fans, but not the players’ favorite – with a giant gold ‘S’ with gold braids on the bill of the hat, or as the military called them, “scrambled eggs.” Jim Bouton said they made he players look like “goddamn clowns.”

Despite their opening day win, the pressure on the team and the stadium was great in spring of 1969, and in some cases not so great- it was said that the water pressure was so low, toilets couldn’t be flushed during games. To make matters worse, ticket prices were among the highest in baseball.

The franchise began to lose money very quickly and the bickering between MLB, the Pilots , and the city of Seattle increased. By the end of September, with the team losing a lot more than they were winning, owner William Daley told the public that if they didn’t start coming to games, he would move the team. The city, trying to blame the ownership group, said if the team didn’t pay their bills (they were renting Sick’s Stadium from the city), they would evict them. None of this sat well with the fans; during the final month of the season, attendance plummeted to only about 4,500 people on average per game.

Towards the end of the season, a Milwaukee ownership group led by 35 year old millionaire car salesmen named Bud Selig (yes, the outgoing commissioner of Major League Baseball) started sniffing around, wanting to buy the team. Only three years before, in 1966, the Milwaukee Braves had moved to Atlanta, even though Bud Selig argued against this move by saying “a baseball team owed it to its community to remain loyal, and not seek new homes, because the loss of a baseball team meant the loss identity.” So, of course, when the Pilots were in dire straits, Selig, completely ignoring his own plea from ‘66, and found a way to get his team.

After secret negotiations, a deal was struck during game one of the World Series in Baltimore. An ownership group led by Bud Selig was going to buy the Pilots for $10.8 million (about $68 million today). Yet, it would take another six heartbreaking months before the team officially moved.  Finally, in March 1970, the Pacific Northwest Sports Inc. (the company owned by Soriano brothers) filed for bankruptcy on behalf of the Pilots, making them the only major league sports franchise to declare bankruptcy.

On April 1, 1970, a judge declared the Pilots bankrupt and ordered the selling (and this time, not secretly) of the team to the Selig group. The moving vans pulled up and the team moved out, six days before opening day 1970 and less than year after the Seattle Pilots made their triumphant debut in Major League Baseball.