Why Do Cans of Diet Coke Float But Cans of Regular Coke Don’t?

September 15, 2014 Karl Smallwood
Mark K. asks: Cans of Diet Coke float. Cans of regular Coke don’t.  The cans are the same size and they contain the same amount of liquid according to the label. What gives? 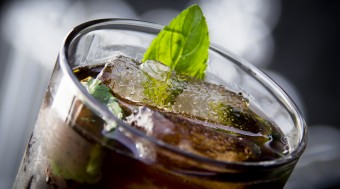 Fun fact: If you put a can of Coca-Cola into a pool of water, it would sink. However, if you put a can of Diet Coke into the same pool, it would float. (Another fun fact: Coca-Cola was invented by a man seeking a cure for the morphine addiction he acquired during the Civil War, and he marketed Coca-Cola as that.)

In any event, initially, this floating problem seems like something that breaks physics because both cans are the exact same size and contain exactly the same amount of liquid.  Of course, anyone who’s ever taken a physics class at some point probably knows what makes a given object float in the first place, in the simplest possible sense, is that an object will float provided it displaces an amount of liquid (or sufficiently dense gas) that weighs more than itself.

As you may recall, one of the earliest known scientific uses of density was by the ancient Greek mathematician and all round nerd, Archimedes when the king of Syracuse supposedly asked him to determine whether or not his crown was made from the same bar of pure gold he’d originally given his jeweler. The king suspected that the jeweler had pocketed some of the gold he’d been given, replacing it with silver, but couldn’t prove it without melting down his crown and physically comparing it to another block of gold the same size as the original, which wasn’t an option the king was going to consider.

Eventually, Archimedes hatched a cunning plan to submerse the crown and measure the amount of water it displaced and compare that to the amount of water displaced by an equal mass of pure gold. If the crown had been made with less dense materials than pure gold (including silver), it would displace more water than the gold bar. Legend has it that Archimedes happened upon this idea when he jumped into a bath full of water and sent waves of bath water cascading to the floor, resulting in him running naked through the streets screaming Eureka! (Greek for “I found it”).

Sadly, but not perhaps surprising, both Archimedes’ eureka moment and the whole idea of him submerging the crown in water are believed to be the work of fiction, attributed to noted Roman scholar, Vitruvius, a full 2 centuries after Archimedes died. Further, it’s believed that simply submerging the crown in water wouldn’t have given precise enough measurements for Archimedes to make a judgment on whether or not the crown contained a little silver (at least not with the tools he had available). But it makes a great anecdote for high school science teachers to tell their students I guess. (Another common one told by many a math teacher/professor is that the reason there is no Nobel Prize for mathematics is because a famed mathematician stole Alfred Nobel’s girl.  Unfortunately, this is not true at all either. See: The Reason There is No Nobel Prize in Mathematics)

In any event, regardless of the veracity of such tales, Archimedes’ name ultimately would forever be linked with the idea of density and buoyancy after he wrote the following in his landmark piece, On Floating Bodies: “If a solid lighter than a fluid is forcibly immersed in it, the solid will be driven upwards by a force equal to the difference between its weight and the weight of the fluid displaced.”

Today this idea is, of course, known as Archimedes’ Principle. 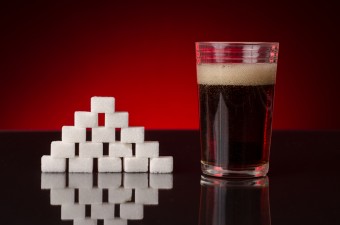 So getting back to cans of floating fizzy drinks- we know from all this that given a can of Diet Coke floats and a regular can of Coke sinks, despite the pair containing the same amount of liquid and in the same model of can, the regular Coke’s combined ingredients must be more dense. And, in fact, a 12 ounce can of Coke has more mass because of the 39 grams of sugar it contains, compared to the 125 milligrams of sweetener in a can of Diet Coke.  This minute difference in density between both cans just so happens to result in the total mass of either can falling on either side of the average density of pure water (just slightly less than 1 g/cc, varying slightly based on temperature, reaching its maximum density at 4 degrees Celsius or 39.2 degrees Fahrenheit). This results in one can floating and the other sinking and science teachers everywhere having a trick to go along with their often questionably accurate anecdotes. 😉