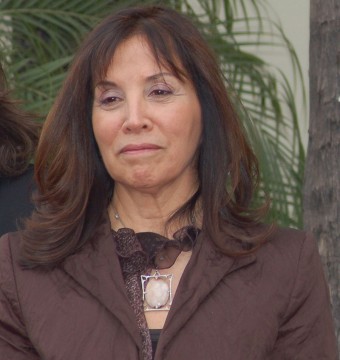 On Sept 2, 1978, George Harrison married Olivia Arias in a private ceremony with only her parents in attendance. She had given birth to their only child, their son Dhani, the month before. The couple remained married until George’s untimely death from cancer on November 29, 2001.

Olivia Arias was working as a secretary for A&M Records when the couple met at a company party in 1974. The pair immediately hit it off and began a phone-based long distance relationship. After countless long and intimate conversations, George invited Olivia to come along on his upcoming American tour.

Their romance blossomed, and they both realized their relationship was a serious one. Harrison’s divorce from first wife Patti Boyd (who was all loved-up with George’s pal Eric Clapton) was nearly final, and as soon as it was, he wanted to marry Olivia.

The couple intended to make it official in May of 1978, but postponed the ceremony due to the death of George’s father Harry Harrison. They wed on September 2nd, announced their marriage publicly five days later, and honeymooned in Tunisia.

Olivia admits that while she and George shared many common interests including a deep commitment to the practice of meditation, life with the “Quiet Beatle” presented its own formidable challenges. “He did like women and women did like him. If he just said a couple of words to you it would have a profound effect. So it was hard to deal with someone who was so well loved,” Olivia said.

Fellow Beatle Paul McCartney added, “I don’t want to say much, because he was a pal, but he liked the things that men like. He was red-blooded.”

On December 9, 1980, Olivia received a phone call from George’s sister Louise, who told her that John Lennon had been murdered outside his New York City home. She then had the horrible task of telling her husband his life-long friend had just been gunned down by a maniac. She recalled his anger that John was forced to leave his body in such a violent manner, and cancelled his upcoming recording sessions to mourn John’s passing.

George and Olivia faced a narrow escape of their own on December 30, 1999 when a crazed attacker gained entry to their Friar Park home. Upon hearing noises downstairs, George went to investigate. He was assaulted by an intruder who stabbed him in the chest with a knife. Luckily, Olivia wasn’t far behind him and she clocked the guy with a heavy lamp.

The assailant was taken to a mental institution where he said he was attacking Harrison because it was “God’s desire,” and the Beatles were witches who needed to die. Yep…

George and Olivia were taken to the hospital, and both made full recoveries.

In 1997, George was diagnosed with throat cancer. At first, his prognosis was hopeful, but by 2001, the cancer had spread to his lungs and brain. George, who was a firm believer in reincarnation, had this to say: “Death is just where your suit falls off and now you’re in your other suit. You can’t see it on this level, but it’s all right. Don’t worry.”

George was determined not to die in the hospital. Paul McCartney offered the use of his Los Angeles home, and Olivia and Dhani got him settled in and as comfortable as possible. George reportedly peacefully passed away on November 29, 2001 with his wife and son at his side.

Four years after her husband’s death, Olivia commented on how she was coping, “I am still having a relationship with him, but it is just not a physical relationship anymore. And the sooner one comes to terms with that, the easier it is, rather than feeling George has gone and he is never coming back.”