This Day in History: September 23rd- The Water Nymph 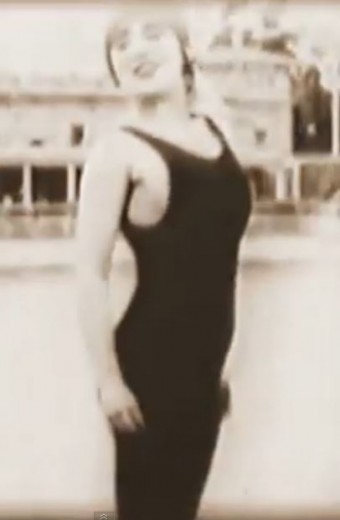 On September 23, 1912, movie history was made in several different ways. When Mack Sennett’s first groundbreaking Keystone comedy, “The Water Nymph” was released, Mabel Normand became the first actress to appear on-screen wearing a bathing suit. Additionally, Sennett promoted the film using Normand’s name and likeness, which was a big deal because up until then actors and actresses were thought of as little more than the hired help. Let that one sink in a minute.

Sennett certainly knew how to garner attention for his new studio’s initial release. The center of the ad was dominated by a still photo from “The Water Nymph” featuring Mable decked out in Kellerman tights, named after Boston swimmer Anna Kellerman, who was arrested for wearing a skin-tight body stocking on the beach. In an era where exposing an ankle was considered improper, Mabel’s get-up that left nothing to the imagination was considered beyond controversial.

Before starting Keystone, Mack Sennett had directed films starring both himself and Normand at D. W. Griffith’s Biograph Company in New York, and it gave them both a good working knowledge of movie making. But Griffith liked to play it safe and remain carefully non-offensive, while Sennett longed to thumb his nose at decorum and mock the social hierarchy that supported such nonsense.

So Mack and Mabel, who had become romantically as well as professionally intertwined, headed for the west coast where Sennett, who became known as the “King of Comedy,” founded Keystone studios in Edendale, California. Many legendary names from the early days of Hollywood got their start at Keystone, including Fatty Arbuckle, Charlie Chaplin, Gloria Swanson, The Keystone Kops, W. C. Fields and Bing Crosby.

Only a year after “The Water Nymph” was released, Keystone Studios had churned out 135 short comedies and single-handedly invented the art of cinematic slapstick. Though most people believe all of the Keystone comedies were largely improvised, a good number of them were carefully scripted and staged with close-ups, tracking shots and special effects.

The times were changing, and Sennett’s films reflected that – his characters were randy and challenged authority, were often portrayed as rather dim-witted, and it was every man – or woman – for themselves. Instant gratification was the order of the day in Sennett’s world. Unlike his mentor D.W. Griffith whose films had a very 19th century feel, Sennett had an eye for the future and featured ragtime bands, hot air balloons, and Mabel driving (remember, this was a time when even most men lacked that skill) in his movies.

In 1928, Photoplay magazine published an interview author Theodore Dreiser did with Mack Sennett. Dreiser said that behind Sennett’s “sagging, half-lackadaisical manner,” he could see “a forceful, searching intellect … a terrifying wisdom. … It was interesting just to feel the force and intelligence of him.”

During the interview, Dreiser posed this question to Sennett, “I return to my first question – your artistic excuse for being – the animating faith that is in you?”

Sennett replied, “My artistic reason for being? The faith that is in me! I guess I never thought about those things when I started out, but I can give a fair answer now. Everybody wants to laugh at something. Mostly at other people’s troubles, if they’re not too rough. … And always in some kind of story that could be told very differently if one wanted to be serious.”