This Day in History: September 22nd- From Butcher’s Son to the Power Behind the Throne, The Tale of Thomas Wolsey 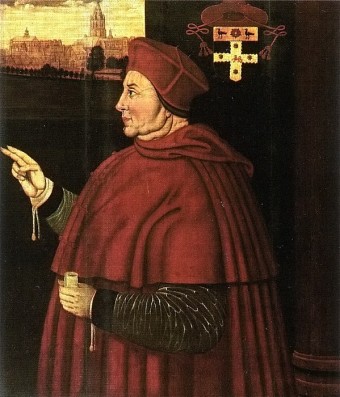 Thomas Wolsey, as high and mighty as he became, rose from humble beginnings. He was born around 1473 as the son of a butcher – as common as it gets. His climb to the top began after he attended Oxford University and was ordained into the clergy in 1498. His ambition and ability was noticed by governor of Calais Sir Richard Nanfan, who appointed the young cleric as his personal chaplain. It was Nanfran’s influence that secured Wolsey’s position as almoner to King Henry VIII in 1507, and then things really began to happen for the young priest.

Wolsey was already admitted to Henry’s Privy Council by 1509, but proved himself indispensable to the King during his French campaign of 1512-1514. By this time, the pleasure-loving young monarch felt entirely comfortable leaving most of the affairs of state in the very capable hands of Thomas Wolsey. This made him a bit of a teacher’s pet in the eyes of the older nobility, such as the Dukes of Buckingham and Norfolk, who resented the presence of “new men” (commoners raised up by the king, rather than those with ancient titles) like Wolsey at court regardless. Resentment against him grew.

The cleric rose to power quickly in the church, as well as in the government. With Henry’s patronage, Pope Leo X appointed him Bishop of Lincoln and Archbishop of York in 1514, and raised him to the rank of cardinal in 1515, the same year King Henry made him Lord Chancellor of England. With his incredible ecclesiastical and secular power, only the King outstripped him.

Wolsey was definitely Henry’s go-to guy. The cardinal had made it possible over the years for the King to enjoy all the cool trappings of kingship without most of the pesky kingly duties. So when Henry wanted to ditch his first wife Katherine of Aragon to marry Anne Boleyn in what because euphemistically known as his “Great Matter,” the King had no doubt that Wolsey would get the job done as always.

Henry’s reasoning for ending his marriage was based on the premise that Katherine was previously married to his older brother Arthur, who died at 15, seemingly before consummating their union. No-one questioned this at the time, but a papal dispensation was acquired as a formality. Now, over 20 years later, the fact that his marriage to Katherine had not produced a son led Henry to believe that their union had been cursed by God because he had married his brother’s wife. Simple enough to rectify – kings had set aside wives many times in the past.

Wolsey ran into a serious snag though, as Queen Katherine was the aunt of the extremely powerful Holy Roman Emperor Charles V, who Pope Clement VII was very reluctant to antagonize. In addition, Queen Katherine would not go quietly. The pope stalled as much as he could, postponing a decision until the case could be heard in Rome. In September 1529, while Wolsey was away in France, Anne Boleyn’s family and the English nobles, who finally had their chance to knock the butcher’s son down a peg or two, worked on convincing King Henry that it was the Cardinal holding up the proceedings.

Henry was always an “out-of-sight-out-of-mind” kind of guy, and easily swayed by those in his immediate vicinity, so he came to believe that the Cardinal was in league with the Pope and deliberately preventing his annulment. On September 22, 1529, the King stripped Wolsey of his office as Chancellor of England. He also lost many of his other offices and holdings, but Henry did allow him to retain the Archbishopric of York.

Even while exiled in York, Wolsey was in touch with the King of France and the Holy Roman Emperor, anticipating the day when he would win back the King’s favor. When Henry heard of this correspondence, Anne Boleyn passionately asserted this could only mean the Cardinal was guilty of treason, and Wolsey was arrested in November.

Wolsey was already ill at the beginning of the long journey to London to stand trial, and grew worse with every passing mile. While on his death bed, he remarked, “If I had served God as diligently as I have done the King, he would not have given me over in my grey hairs.” Thomas Wolsey died on November 30, 1530 at Leicester Abbey.