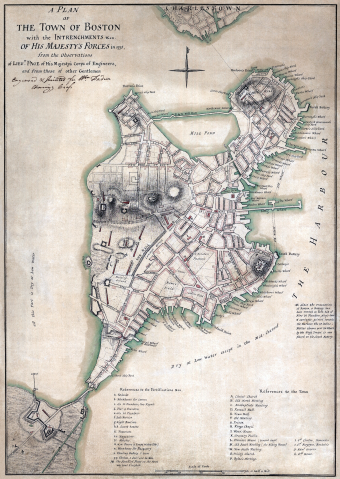 Long before the Red Sox, Whitey Bulger, or Tom Brady, Boston’s first European settlers called the area Trimountaine in reference to its now non-existent three mountains. The name didn’t stick for very long. The land that was called Shawmut by the local Algonquin inhabitants was named Boston (after Boston, England) on September 17, 1630. This date is considered the anniversary of the founding of the settlement that became the city of Boston.

Of course, Boston didn’t just suddenly spring to life when Europeans showed up. Archaeological evidence shows that Native Americans lived in the Shawmut Peninsula between the Back Bay and Massachusetts Bay as long ago as 5,000 B.C.E., with a lot less traffic and college kids.

The first Englishman to make Boston (then Shawmut) his home was Reverend William Blackstone, who arrived alone in 1629. When John Winthrop and a group of Puritan settlers found the conditions up north in Salem unsatisfactory, Blackstone invited them all down to Shawmut. He lived to rue the day.

Winthrop eventually became the first governor of the Massachusetts Bay Colony, which quickly became so intolerant and restrictive under the Puritans that Blackstone, the original European Bostonian mind you, took a powder. But despite the notorious Puritan prudery, Boston’s reputation as a center of learning began very early on. Even in its infancy, the city attracted intellectuals, theologians and scholars.

America’s first public school, Boston Latin School, opened its doors in 1635. Ten years later, Roxbury Latin was established, and it’s still in operation today, giving it the distinction of being the nation’s oldest school. And, of course, there’s Harvard University, founded in 1636, making it America’s oldest college and the inspiration for the phrase every Bostonian is demanded to say by out-of-towners: Pahk the cah in Hahvid Yahd (translation: park the car in Harvard Yard.)

The citizens of Boston were also Revolutionary rabble-rousers of epic proportions. By the 1730s, the geographical distance between Great Britain and the colonies led to those in the New World forming a unique cultural identity of their own. They felt, and were, more American than English, so when the mother country began raising taxes on their far-away subjects as a means of control in the 1770s, the cries for independence turned to action.

The Boston Massacre, The Boston Tea Party, The Battle of Bunker Hill … many of the most decisive moments and battles of the American Revolution took place in or around Boston. One of the most memorable of all took place on April 18, 1775 when Captain John Pulling lit two lanterns from the steeple of Old North Church to kick off Paul Revere’s famous ride. The next morning the American Revolution began with the “shot heard around the world.”

With the Embargo Act of 1807, Boston was forced to turn away from the sea and try its hand at manufacturing which became a major part of the city’s economy. Even after the Napoleonic wars had ended and mass foreign trade became possible again, Boston still remained a leading manufacturer of garments and leather goods until the early 20th century. Versatility would always prove to be a good thing for Boston.

On March 4, 1822, almost two hundred years after Reverend William Blackstone paddled into town, the city was officially incorporated as The City of Boston. Wikkid awesome.