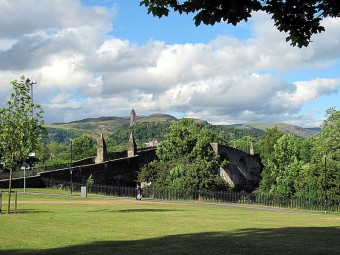 On September 11, 1297, The Earl of Surrey’s English forces met Scottish troops led by William Wallace and Andrew de Moray at Stirling Bridge. The Scots were stationed on Abbey Craig, a rock outcropping overlooking a loop in the Forth River. Surrey, convinced he could easily wipe out the ill-equipped commoners, the Earl wasn’t sweating it, and unintentionally slept in the morning of the battle.

The impetus for this battle began over a decade earlier when Scotland’s King Alexander died in 1286, leaving Margaret of Norway as his only heir. She was contracted to marry Edward I of England’s son, but when she too died the succession of Scotland was called into question. The two best claimants were John Balliol and Robert Bruce; Edward I was asked to mediate.

Edward did so, and chose Balliol, but it became immediately clear that England’s king intended to rule Scotland as a condition of his patronage. Balliol wasn’t having it and allied with Edward’s enemy, the King of France. Edward retaliated by marching north and imprisoning Balliol. By then, Scotland was in chaos.

William Wallace stepped in and quickly gained supporters, mostly from those who backed Robert the Bruce, and raised a revolt for Scotland’s independence.

Before the battle commenced that September morning, Wallace and Moray were offered generous rewards if they would yield, but that wasn’t happening. “Tell your commander that we are not here to make peace but to do battle to defend ourselves and liberate out kingdom. Let them come and we shall prove this in their very beards.” Wallace reportedly said.

So the English forces started trotting across Stirling Bridge two at a time (the bridge was only wide enough to accommodate this many men at once.) When about half of Surrey’s forces had passed over, the main force of Scots attacked the first group of English already on the causeway, while a smaller group began to destroy the bridge. Soldiers and horses plunged into the mire, trapped in the muck. Easy, easy targets.

The rest of the English army could only watch as their buddies were massacred by a bunch of “savages” using weapons like handmade spears. And it only took them about an hour to boot. The Earl of Surrey, who had not crossed the bridge, ran for the border.

For the very first time, commoners had done what once had been thought impossible – defeated mounted nobles and knights in battle and shattered the myth of English invincibility. But William Wallace was not one to rest on his laurels; he saw this victory as the beginning of a long, hard road to freeing Scotland from England’s vise-like grip.

He was right of course. But William Wallace’s legacy is much more than the battles he fought – it’s the hope he instilled in his countrymen that yes, they could stand up to England and fight for their independence with the expectation of actually winning it.

The one-time Prime Minister of Great Britain, Lord Roseberry, summed up William Wallace’s contribution to his country by saying, “Without him the Scots might never have rallied for defence at all, Bruce might never have stood forth and Bannockburn might never have been fought. It is for that we honour him.”