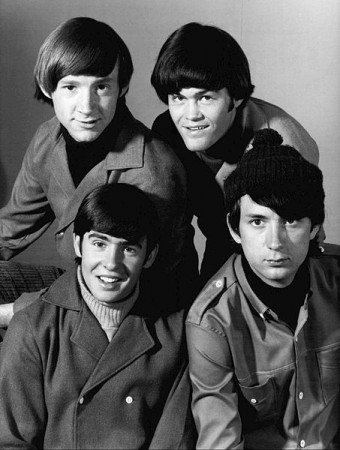 The television series The Monkees revolved around four young guys trying to make it in the music business and the mad-cap adventures they had while doing so. The four “insane boys” (as the casting call described the perfect candidates for the job) chosen by producers Bob Rafelson and Bert Schneider to portray The Monkees were Mickey Dolenz, Davey Jones, Mike Nesmith, and Peter Tork. Dolenz and Jones both had acting experience, Nesmith and Tork were professional musicians.

The Monkees was inspired by the popularity of The Beatles, and was scripted with the same cheekily rebellious spirit that pervades The Beatles first movie “A Hard Day’s Night.” But the similarities between the fictional band The Monkees and The Fab Four ended there.

On the show, The Monkees were always portrayed as struggling musicians looking for their big break. Even in their movies, The Beatles were always cast as – The Beatles. (In the pilot episode, Mike Nesmith is shown tossing darts at a poster of The Beatles – jealous much, Wool Hat?) During an episode when they are psyching themselves up for a screen test, they ask themselves what The Beatles have that they don’t have, and they sing in unison, “13 million dollars!”

The Monkees was up against Gilligan’s Island in its time slot – formidable competition to say the least, but it easily overtook the seven castaways in the ratings. Even more surprisingly, the fictitious band began to overtake The Beatles on the record charts, a feat no-one had even considered. As Mickey Dolenz later described it, “The Monkees really becoming a band was like the equivalent of Leonard Nimoy really becoming a Vulcan.”

Mike Nesmith composed and produced some of The Monkees music from the outset, and Peter Tork played guitar on the Nesmith-produced material, but initially that was the only input the four were allowed in the recording studio. Although they had little to do with the recordings, the public was led to believe they, as The Monkees, were behind the music, a fact that horrified Nesmith:

The first album shows up and I look at it with horror because it makes us appear as if we are a rock ‘n’ roll band. There’s no credit for the other musicians … The powers that be say, ‘Well, you know, it’s the fantasy.’ I say, ‘It’s not the fantasy. You’ve crossed the line here! You are now duping the public.’

Just a few months later, The Monkees would take full control of their destiny as a real band.

Although the series only lasted two seasons, it won two Emmy awards in 1967 for Outstanding Comedy Series and Outstanding Directorial Achievement in Comedy. It was widely seen in syndication in the late ’60s and early ‘70s, and enjoyed a huge resurgence in popularity in the mid ‘80s when The Monkees became at least as popular as they were in their heyday.

When Davy Jones passed away on February 29, 2012, writer James Poniewozik summed up the charm of The Monkees in Time Magazine quite nicely:

Even if the show never meant to be more than entertainment and a hit-single generator, we shouldn’t sell The Monkees short. It was far better TV than it had to be; during an era of formulaic domestic sitcoms and wacky comedies, it was a stylistically ambitious show, with a distinctive visual style, absurdist sense of humor and unusual story structure. Whatever Jones and The Monkees were meant to be, they became creative artists in their own right.