Origin of the Word “Cocktail” for an Alcoholic Drink

July 1, 2014 Melissa
Neil asks: Why do we call some alcoholic drinks cocktails? 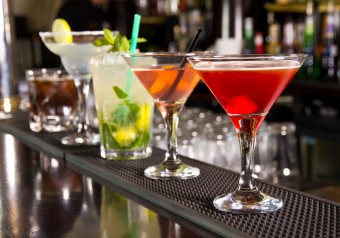 Typically some type of hard liquor mixed with any of a variety of ingredients, although the idea of the cocktail is likely as old as the hills, its name is a relatively recent invention.

There is debate about when the term was first used. According the The London Telegraph, the word is first found in print in a March 20, 1798 satirical newspaper article about what must have been a hell of a party. Of particular note, was the account of drinks imbibed by William Pitt (the younger) which included “L’huile de Venus,” “parfait amour,” and “‘cock-tail (vulgarly called ginger.)'” Some challenge whether “cocktail” in this article truly referred to an alcoholic drink, or something else.

Others point to an April 28, 1803 article from The Farmer’s Cabinet in Vermont, where to drink a cocktail was claimed to be “excellent for the head.”

Regardless, certainly by 1806, the word was being used with its current meaning. In the May 13th edition of the newspaper, Balance and Columbian Repository, the editor defined a cocktail as: “a stimulating liquor composed of spirits of any kind – sugar, water, and bitters.”

Source of the Name

As with the first instance of the term, the exact derivation is also somewhat up for debate.

The Online Etymology Dictionary attributes the origin of the cocktail to a mispronunciation of the French word for eggcup coquetier (pronounced in English as cocktay). Apparently, a New Orleans apothecary (and inventor of Peychaud bitters), Antoine Amédée Peychaud served brandy mixed with his bitters in eggcups in the late 18th century.

A second theory holds that the name is derived from the term “cock tailings,” the result of the practice of tavern owners combining the dregs (tailings) of nearly empty barrels together into a single elixir that was sold at bargain prices. This only makes sense when you know that the spigot of a barrel was sometimes referred to as a “cock.”

During the early 17th century, an animal, particularly a horse, with a docked tail, was said to have a “cock tail.” By the 19th century, unlike other horses, thoroughbreds did not have docked tails, so when a regular horse was entered into a race, its cock tail was noted – and became a term synonymous with an adulterated horse. Since horse racing and liquor go together like peaches and cream, this theory holds that the word “cock tail” was soon used to mean an adulterated spirit.