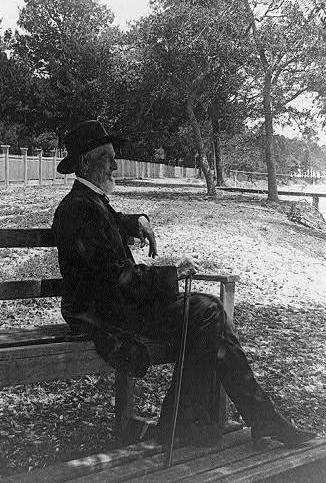 Jefferson Davis was attending a Sunday church service in the capital of the Confederacy, Richmond, Virginia, when he heard the news. Union General Ulysses S. Grant had broken General Robert E. Lee’s defenses in Petersburg, less than twenty five miles from Richmond. By nightfall, the evacuation of Richmond needed to be completed. At approximately midnight, Confederate cabinet members, officials, their families, and the entire treasury (the mythical “Confederate gold”) were finally making their way south to Danville, Virginia on the only railroad still open. This was April 2, 1865. One week later, on April 9th, General Grant and General Lee met at the Appomattox Court House to sign the Confederacy’s official surrender. America’s Civil War was finally over.

Even with a surrender signed and the Civil War effectively over, the President of the Confederacy, Jefferson Davis, didn’t want to admit defeat. He set-up a temporary government in Danville with his trusted advisors (John H. Reagan, Judah P. Benjamin, John Breckinridge, and Burton Harrison among them) to try to figure out a way to reinforce their troops and push the fighting further west. Privately, he began to make plans to flee abroad to a sympathetic Britain or France, thinking that he could form a government in exile. It was not to be.

On April 15th, President Lincoln was assassinated. Now-President Andrew Johnson was under the (false) assumption that Davis and his cohorts had been directly involved in the murder of the President. Union troops, with the US War Department’s $100,000 bounty (about $1.6 million today) on Davis motivating them, moved towards Danville.

Davis and company retreated even further South. They ended up in the town of Washington in Wilkes County, Georgia. On May 4th, Davis held what would be the Confederacy’s final cabinet meeting in Washington’s State of Georgia Bank building. Davis authorized payments from the treasury to his officials and left the rest in care of Captain Micajah Clark in Washington, where “it disappeared under mysterious circumstances.”

Davis, with his family, had been traveling throughout Georgia when they finally made camp in Irwinville in central Georgia on May 9th. The next morning, they were awaken by gunshots. The First Wisconsin and Fourth Michigan cavalries had caught up to them. There are several different interpretations of what happened in those final moments of freedom for Jefferson Davis. While attempting to flee, the Northern press wrote that he was wearing his wife’s shawl and/or petticoat in an attempt to trick his captors. He was called a coward and, later, a popular song of the era was entitled “Jeff in Petticoats.” Davis’s wife insisted, backed up by other historical accounts, that he was simply wearing a shawl because he had become quite ill over the last few days and she had given it to him to keep him warm. Either way, there was no escape. Jefferson Davis officially became a prisoner of the United States government.

He was transported to Fort Monroe in Virginia where he was held for two years as a military prisoner. Soldiers watched him 24/7 to ensure he didn’t try to escape, that he ate, and didn’t try to commit suicide. The country debated how to handle the most famous war criminal from the Civil War.  At first, President Johnson wanted to prosecute Davis as a co-conspirator in the assassination of President Lincoln. However, as the trial for the true assassination conspirators wound down in late June 1865, it became clear that Jefferson Davis had no direct connection to the parties.

Within a year, Davis was transported to much better quarters and his wife was even allowed to move to Fort Monroe to be near him. According to the Virginia Foundation of Humanities, Davis respected the way he was being treated by the government. He was afforded certain privileges, like visitors, exercise, and time with his wife, that they didn’t necessarily have to give him.

On May 13, 1867, he was released into civilian custody on $100,000 bail.  The editor of the New York Tribune, Horace Greeley, abolitionist Gerrit Smith, and several other prominent Northerners paid that bail. Said Smith on his reasoning for doing this,

My first reason for signing the Bond was that Mr. Davis was entitled either to his trial or to his liberty. That the prisoner should have a speedy trial is a general proposition, which no one combats. There may have been sufficient reasons for unusual delay in trying Mr. Davis: – hardly, however, for a delay of two years.

President Andrew Johnson’s own impeachment trial delayed any motions even further. Additionally, there were several issues that the prosecution (the US government) ran into charging Davis with treason. For one, the defendant (Davis) demanded a trial which forced the government to figure out the correct way to prove the unconstitutionality of secession. Needless to say, this was a tough task and the government asked for more time to gather their argument.

Finally in December 1868, a year and half after he was released on bail, preliminary motions were held for Davis on the charges of treason against the United States for organizing and arming the 1864 military invasions of Maryland and the District of Columbia.

The defense immediately called for a dismissal of the charges. They said that since Davis would already be punished by the Fourteenth Amendment, he could not be further prosecuted under the double jeopardy provision. (See The Truth About Double Jeopardy) The Fourteenth Amendment had only been passed in July of that year and dealt with a lot of issues in regards to Reconstruction, but in section three it read,

No person shall be a Senator or Representative in Congress, or elector of President and Vice President, or hold any office, civil or military, under the United States… shall have engaged in insurrection or rebellion against the same, or given aid or comfort to the enemies thereof.

The case went to the Supreme Court, but it was never tried. For fear that the Supreme Court would rule in favor of the defense and make the US government look incompetent, President Johnson issued a pardon on Christmas Day, 1868 to all persons who participated in the “rebellion.” Jefferson Davis was no longer a wanted man.

Davis and his family traveled to Europe for a time after his release, no doubt disillusioned with the whole process of prosecution. Upon returning, he took up residence in Tennessee. He kept to himself and didn’t comment publicly about Reconstruction. Privately, according William Cooper’s biography on Davis, he thought of African-Americans as inferior to white men and resented that the South was ruled by “Yankees and Negroe.”

He moved to an estate called Beauvoir near Biloxi, Mississippi. In fact, the state of Mississippi tried to make him a US Senator, only for him to be denied due the previously discussed Fourteenth Amendment. As his quiet retirement continued, he completed a two-volume book in 1881 about his wartime experiences called The Rise and Fall of the Confederate Government.  In 1888, his reputation as a Confederate hero restored, he said this to an audience of supporters in Mississippi,

“… lay aside all rancor, all bitter sectional feeling, and make your places in the ranks of those who will bring about a consummation devoutly to be wished—a reunited country.”

On December 6, 1889, Jefferson Davis passed away in New Orleans, Louisiana. He was buried there for four years until 1893, when he was relocated to Hollywood Cemetery in Richmond, Virginia. His remains are still there, in the same city where his fall began.