This Day in History: July 8th 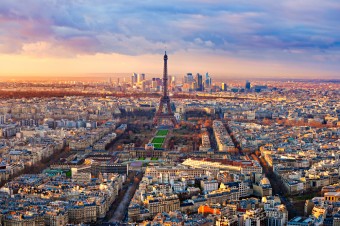 On July 8, 52 C.E., Julius Caesar conquered a small fishing village in Gaul (modern-day France) called Lutetia Parisiorum, which over the centuries would become one of the most elegant and influential cities in the world. If you could look at those two cities side-by-side now, they would have little in common aside from the location – the Paris basin on the Ile de la Cite.

This was a perfect spot for Julius Caesar, who was a general in the Roman Army at the time, as it brought his troops to the banks of both the Rhine and the English Channel, providing a dandy base for an invasion to conquer even more of Europe. This, of course, meant more territory for Rome and more power for both the Empire and Julius Caesar.

Though this day is traditionally celebrated as the birthday of Paris, the city’s history can be traced back to the Parisii, a Gallic tribe who settled on the Ile de la Cite around 250 B.C.E. These nature-worshiping Druids who hunted and fished along the Seine lived in the area right up until the time of the aforementioned Roman invasion, when Julius Caesar defeated their chief warrior Vercingétorix in 52 C.E.

True to form, the Romans paved roads and built a city around the left bank and the Ile de la Cite modeled on the grid plan used in their other settlements. They also constructed an aqueduct, a theater, a forum and public baths, and Lutetia became a prosperous, bustling city.

By 360 C.E., the Roman Empire was steadily declining. As Roman influence waned, the city reverted to its Gallic roots and was renamed Paris. It was soon re-conquered by a Germanic tribe called the Franks (France means “land of the Franks”) who named Paris as the capital city in 508 C.E. The Frankish King Clovis founded the Merovingian dynasty, established Salic law, and once again Paris was thriving.

Today, the only signs of Roman occupation of the city still in existence are early Christian catacombs underneath Notre-Dame, the crumbling ruins of the Arenes de Lutece amphitheatre in the Latin Quarter, and the remains of the public baths in the Musee de Cluny. The rest have been sacrificed to the ravages of the elements and time.