Why Books are Called Books 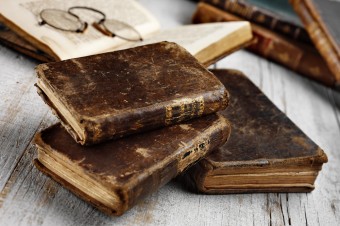 “A portable volume consisting of a series of written, printed, or illustrated pages bound together,” the word for book (or variously booke, bokis, boke and boc) has been around for as long as the English language.

Each of these variously meant a large written document, a writing table, a written text, a scripture, a story, a history, and/or even a letter of the alphabet.

In England, by the 8th century, the term boc, meaning a volume of written words, was in use. The earliest known example is attributed to King Alfred who, in translating a book written in Latin by Pope Gregory I, toward the end of the 9th century, wrote “Ic bebiode . . . daet nan mon done aestel from daere bec ne do, ne da boc from daem nynstre.”

Contemporaneously, the West-Saxon Gospels, which translated the first four books of the New Testament into Old English, noted, “He pa boc unfeold.”

Still almost unrecognizable as English, boc continued to appear in early Middle English texts. For example, in Sawles Warde, written about 1225 A.D., it noted “He pa boc unfeold,” while in Owl & Nightingale, penned in 1275 A.D., the author wrote, ” On ape mai a boc bi halde, An leues wenden & eft folde.”

Note that, in this evolving language, some spelling were becoming much closer to our modern tongue, such as this from St. Dominic, written about 1300 A.D. “His bokes he solde and al is guod.”

Although historians do not agree on the exact dates, the early modern English period is said to have spanned, roughly, the Tudor and Stuart dynasties (1485 A.D. to 1714 A.D.). From this point on, the English variants are much easier to read and understand, even though several were used.

In 1519, W. Horman wrote in his Vulgaria, “A volume is lesse than a boke: and a boke lesse than a coucher,” while in 1535, G. Joye noted, “There were so many false printed bokis stil putforth & bought vp so fast.”

By 1641, in More’s Hist. Edward V, W.S. wrote, “There coming . . into my hand a booke long since printed,” and finally, in 1674 the first modern spelling appears with “Would you anathemize, banish, imprison, execute us, and burn our books?”

Expand for References
[1] All quotations of early uses of the word “book” and its variants in this article come from the OED’s compilation.