The Skin of an African Elephant 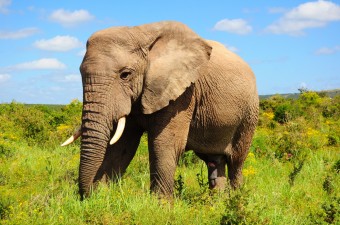 When you consider their size and how much they have to keep under wraps, African elephants have surprisingly thin skin, relatively speaking.

Across most of their bodies, an African elephant’s skin is only somewhere between 2 and 4 cm or .78 to 1.6 inches thick on average.

All of this relatively thin skin holds in a whole lot of elephant. Adult African elephants can weigh anywhere from just under 8,000 to just over 13,000 pounds, and all of that mass puts a tremendous amount of pressure on the animal’s skin. In fact, certain places require extra support, such as the fibroeslastic-like sheet of additional support around its belly, just to keep the elephant’s internal organs in place.[1]

Because of this tremendous pressure, it is very dangerous to perform abdominal surgery, such as a cesarean section, on an elephant. Once opened, the viscera will spill out, and it can be very difficult to stuff it all back in. In fact, rather than performing the type of cesarean commonly done on human mothers, with elephants, “an opening is made under the anus, through which the baby can be pulled out.” Even with this accommodation, elephant cesarean sections are not often successful.[2]

Elephants lack sweat glands, so they’ve developed other methods of cooling off.

Unlike most of its skin, around the ear, the elephant’s dermis can be as thin as 1 mm. This thinness allows the blood circulating in the ears’ many veins to better transfer the animal’s internal heat to the atmosphere.

Interestingly, unlike humans who have hair to keep us warm, elephant hair helps keep it cool. This is because the elephant’s sparse hair (about 1,500 per square meter), as opposed to our thick manes (about 2 million over the same area on our heads), helps transfer heat away from their body while not being thick enough to help retain it, enhancing their “ability to lose heat by up to 23%.”

The Sense of Touch

Despite its thickness, an elephant’s skin is very sensitive, to the point where it can feel a fly land on its back. Surprisingly, it is also sensitive to the sun, and baby elephants are even known to sunburn. The species’ notorious love for mud and baths helps alleviate both of these problems.