June 4, 2014 Kathy Padden
Brian T. asks: Where do the Gypsies originally come from? 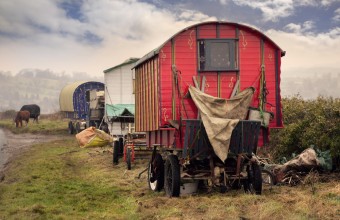 They do not have a shared homeland or national identity. They are a people who are scattered across the globe and whose origins have always been shrouded in myth and mystery (among other reasons because they have kept no written records of their early history). Many saw them (and continue to do so in many cases) as dirty, thieving and undesirable, others as artistic, romantic and carefree. In France, they are referred to as gitanes, in Spain they are called gitanos, and in Germany, zigeuner.

There are an estimated 12 million Romani – better known as Gypsies – living worldwide. Most of them (8-10 million) live in Europe, making them the continent’s largest ethnic minority group. So where did they come from?

A recent genetic analysis of 13 European Gypsy groups confirmed that their ancestors, for reasons not perfectly clear, left India in a single emigration wave some 1,500 or so years ago. “There were already some linguistic studies that gave clues pointing to India and genetic studies too, though without being precise about the where or when,” explained David Comas, leader of the research group that made the discovery.

So, the legend that the Gypsies hailed from Egypt – which may be simply due to their dark coloring or from tall tales they themselves spread to gullible Europeans – was proven false. (Some purport this belief may have been the origin of the name “Gypsy,” from the Middle English “gypcian,” which was short for “Egipcien”)

The Gypsies, through their quick wits, penchant for giving themselves fake dukedoms, and/or claiming to be on bogus pilgrimages, managed to gain the protection of kings and popes as they made their way through Europe. After all, no good Christian was going to turn away a traveler with a (phony) title or a (ill-gotten) letter from the Holy Father. By the 1400s, the Gypsies were living throughout France, Germany, Italy and Hungary.

One can only imagine the impression the Gypsies must have made on the Europeans, who lived very sheltered, monotonous lives within their tiny villages. To encounter a band of dark-skinned traveling people with black eyes and hair, wearing strange clothes and speaking “gibberish” would have been almost akin to an alien visitation for medieval folks.

In the first documented account of the Gypsies- via a fourteenth century Irish monk, Symon Semeonis-  the good minister thought that they must be “the descendants of Cain.” All too quickly, that sort of sentiment would spread, as curiosity turned to contempt.

The Gypsies would set up camp just outside the towns, and, among other things, the men worked as horse traders and metal workers while the women told fortunes. The problem was that they also depended on the generosity of the local people. When they felt said generosity was insufficient, they would even the score by helping themselves. They gained an often justified reputation as pickpockets and thieves. Many Gypsies were arrested for theft, and some were executed for their crimes.

Spain became the first country to issue an edict against the Gypsies in 1490, prohibiting their dress, language and customs in an effort to forcibly assimilate them, but it only made them keep a lower profile. France and England enacted expulsion orders in the 1530s, and many countries in central Europe forced the Gypsies into slavery, leaving them no choice but to continue their nomadic existence.

In the 20th century, the Gypsies faced a much more sinister foe than medieval villagers in the form of Adolf Hitler and the Nazis, who decided that all Gypsies must be exterminated. They were accused of many crimes that the Jews were also blamed for, including such things as child abduction and cannibalism. During the war, besides being occasionally rounded up, they were also often simply killed on sight. When World War II was over, an estimated 500,000 to 1,500,000 Gypsies had perished at the hands of the Nazis.

Even after facing the horror of the Nazi death camps, the Gypsies continued to be marginalized in post-war Europe, and still have to deal with discrimination, exclusion and isolation to this day. European Gypsies are often forced to live in ramshackle settlements, and are denied adequate medical care and employment opportunities due to their ethnicity. Partially because of this, the average Gypsy lifespan is 10-15 years shorter than the overall European average.

Robert Kushen of the European Roma Rights Centre in Hungary explains how serious the discrimination against Gypsies in Europe really is: “They suffer from forced evictions – and have been targeted recently in both France and Italy, and it seems that in some places, like Romania and Bulgaria, the laws applying to free movement within the European Union don’t quite apply to them in the same way that they apply to other people.”

His group is reaching out to the European Union to bypass any governments that disregard EU rulings regarding the treatment of Gypsies, so that the policies protecting them can be enforced. The United Nations and other international organizations have also begun putting pressure on the offending nations to rescind their exclusionary policies and allow the Gypsies equal rights. The Gypsies themselves have formed the Roma National Congress to advocate for change and represent their interests.

So things may finally be looking up for one of the more unique cultures in world history. There’s still a lot of stigma attached to the word “Gypsy,” but when you ponder what other ethnic groups have been responsible for over the past few thousand years, “stones and glass houses” comes to mind.