June 23, 2014 Matt Blitz
Robert N. asks: What ever happened to the flags and other things left on the moon? 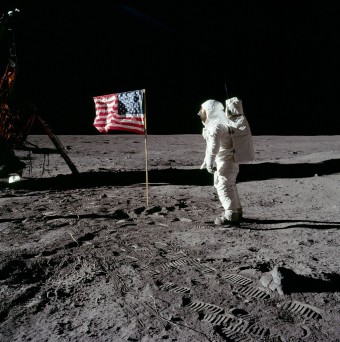 On July 20, 1969, Apollo 11 touched down on the moon. At 10:56 pm eastern standard time, Neil Armstrong accomplished another first. With the immortal words, “That’s one small step for a man, one giant leap for mankind,” (or something like that) Neil Armstrong became the first human to step foot on a major celestial object. Soon after, Buzz Aldrin joined Armstrong on the alien surface. The two of them spent the next two and half hours exploring, taking pictures, and collecting samples.

Before they took off back to Earth, Apollo 11 left evidence of their rendezvous with the moon. Besides Armstrong’s boot print and a bunch of junk, the astronauts also planted a three foot by five foot nylon American flag mounted on a pole into the ground. Subsequent Apollo missions that made it to the moon followed suit. But what happened to all of these flags? Are they still standing? Do they even still exist after nearly a half century on the moon?

As for the Apollo 11 flag, when the engine came on and the spaceship shot up away from the moon, Aldrin said he saw the flag get knocked over by the rocket blast. Beyond that, it was thought that there would be little chance the flag would survive on the harsh environment of the moon. From the extremely abrasive lunar dust to the sun’s unfiltered ultraviolet rays, the flag most likely would quickly be bleached white and disintegrate.

In fact, the flag was never intended to last long. It was purchased from the New Jersey-based flag company Annin for five dollars and fifty cents (which is about thirty five dollars today). (Annin has been making flags since 1847, making them the oldest flag manufacturer in the US today.) The flag was made with basic, ordinary nylon with no intention of existing on the moon for very long, much less for decades or more. In 2008, Dennis Lacarrubba, an employee of Annin, told Smithsonian that he couldn’t “believe there would be anything left. I gotta be honest with you. It’s gonna be ashes.”

Five other, less talked about, flags got planted on the moon during Apollo 12, 14, 15, 16, and 17. Apollo 13 never made it to the moon because, well… they had some problems as you’re no doubt familiar.  These flags were also not specially made to survive on the moon, but just ones anyone could pick up at a local store.

Apollo 17, launched on December 7, 1972, featured the last humans to walk on the moon. As astronaut Eugene Cernan and geologist Harrison “Jack” Schmitt were placing the American flag into the lunar surface, Cernan apparently quipped that if he pounded the flag extra hard into the moon, that it may just last a million years.

While no human has walked on the moon since 1972, plenty of crafts sent by various nations have orbited it, taking pictures as they went. As the technology advanced and the pictures became sharper, portions of the moon’s surface were seen in great detail for the first time since 1972.

This brings us to 2012. The Lunar Reconnaissance Orbiter Camera, or LROC for short, was first launched in June 2009. It spent over three years orbiting the moon and taking pictures with its high-resolution camera. In 2012, images sent back by LROC confirmed that all but Apollo 11’s flag and possibly Apollo 15’s flag not only survived, but are still standing.

By looking at the photos from different points in the day, the movement of shadows confirm that the flags, in some form or another, are still there.  Apollo 15’s flag is still generally thought to be standing, as there is footage of this after the astronauts left. But the LROC images showed no distinctive shadow for it, as with the others confirmed still standing. That said, given the other flags seemed to have survived and it was still standing after the astronauts left, there is little reason to think this particular one disintegrated when the others did not.  For that matter, it’s possible the Apollo 11 flag is still intact as well, simply lying on the lunar surface.

So what about the condition of the flags? The general consensus is that the colors have probably faded to white.

The LROC was also able to document other things left behind by the various Apollo missions, including tracks made by astronauts, backpacks, and rovers that were left. As technology progresses, we will soon be able to see the flags for ourselves to confirm the exact state, instead of relying on shadow movement.