This Day in History: June 4th 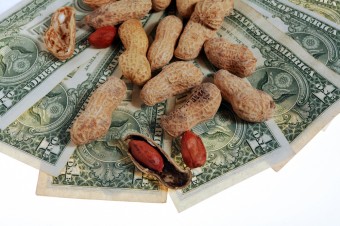 The state of Massachusetts enacted the nation’s first minimum wage law on June 4, 1912. The law only protected women and children, but since these groups were the ones most often exploited by unscrupulous employers (relatively speaking), it made a huge difference to those toiling in sweat shops six days a week for peanuts.

Conditions for working women at the beginning of the 20th century were certainly grim. Women were paid what their bosses saw fit to pay them – period. Working 10-12 hours a day was the norm. Women couldn’t vote in 1912, so weren’t exactly in a position to change things politically. The notion that women should make anywhere near what a man did was completely laughable. And the children working in the sweatshops fared even worse.

The law passed in Massachusetts didn’t set an across-the-board dollar amount for a minimum wage, but rather ordered the appointment of a commission to oversee various occupations in the Commonwealth. Many factors were taken into consideration, including but not limited to the job itself (complexity, etc.) and the employee’s skill level, to calculate a wage that would “supply the necessary cost of living and to maintain the worker in health.”

Of course, this wasn’t greeted all that warmly by the business owners about to lose all that incredibly cheap labor, and when minimum wage laws were passed in 15 other states between 1912 and 1923, many companies went to great lengths to evade them. Some businesses even demanded that their workers “kick back” the difference between the minimum wage and what the company was willing to pay.

In 1923, The District of Columbia’s minimum wage law was struck down by the Supreme Court, which ruled it violated the Fifth Amendment by limiting a worker’s right to set a price for their own labor. A laundress walking into her foreman’s office and calmly negotiating her own fair wage was not a very realistic scenario, and harkened back to why a minimum wage was necessary in the first place – but the law’s the law.

During the Great Depression, it became apparent that a federally mandated minimum wage was a necessary step in and help rebuild the country’s economic foundation. Labor Secretary Frances Perkins minced no words when she wrote about the unscrupulous sweatshop owners that workers needed to be protected against: “…men of inferior business caliber who probably could not survive at all if it were not for their willingness to be entirely ruthless in exploiting labor.”

Both Franklin Roosevelt and Republican opponent Alf Landon made it a central issue of their 1936 presidential campaigns. During FDR’s second term, the Fair Labor Standards Act was passed by Congress in 1938, which established a minimum wage of 25 cents an hour (about $4.08 today). A federal minimum wage has remained on the books ever since, though some states have a minimum wage that exceeds the federal rate.