This Day in History: June 12th 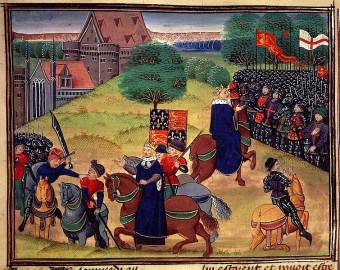 The Peasants’ Revolt in England started suddenly, but the seeds were sown many years beforehand. The Black Death during the earlier part of the 14th century caused a serious shortage of workers, which gave the peasant class the option to choose where they worked – a freedom that was unheard of in feudal society.

Fearful that the serfs would refuse to work their lands, many lords gave the peasants their freedom and paid for their labor. Three decades later however, class resentment over the loss of their feudal rights began to come to a head, and the workers feared the lords would renege on their agreement. Peasants were also bitter about the two days a week many were forced to work the Church lands free of charge while neglecting their own farms, which seriously affected their livelihoods.

But as is usually the case, what pushed the peasants over the edge was excessive taxes.

The common folk were taxed up the ying-yang to pay for the Hundred Years War with France. 14-year-old King Richard II introduced a poll tax of 5p per person in 1580 (a hefty sum at the time) which he imposed upon the people three times within four years.

When a tax collector arrived in the Essex village of Brentwood to inquire why no-one had paid the latest poll tax, the inhabitants of the village replied by kicking his butt and booting him out. After this attack, the revolt spread quickly throughout southeast England as peasants from villages in Kent (where a man named Wat Tyler was picked as leader of the rebellion), Suffolk, Norfolk and Hertfordshire joined in the uprising, traveling through the countryside destroying monasteries, churches and properties belonging to the nobility.

When the rebel forces reached London on June 12, 1381, they were at least 20,000 strong. After an unsuccessful attempt was made to petition King Richard II, the mob robbed and burned several aristocratic homes including the residence of John of Gaunt. They destroyed Newgate and Fleet prisons, freeing all the inmates. The Savoy Palace and the Hospital of St John were also in ruins by the end of the day. Though Wat Tyler had called for restraint, many foreigners in the city died at the hands of the rebels.

On June 14th, Tyler led a raid on the Tower of London. Simon Theobald, the Archbishop of Canterbury, passionately hated by the peasants who blamed him for their wretched condition, was dragged to Tower Hill and beheaded. Clearly the Tower guards felt the same way the peasants did, because they just stood aside and watched as Theobald and his staff went off to their deaths.

By this point, the teenage King wisely thought it best to negotiate with Wat Tyler and the rebel army. Once he heard their list of grievances, the King agreed to end feudal serfdom and service to a lord, and to end market monopolies. After receiving the promise a King, which medieval men believed to be as certain as the sun rising in the east, many of them returned to their homes, feeling victorious and content.

Wat Tyler knelt before Richard II on June 15, 1381 at Smithfield to request the promised charters. Accounts of what happened next vary, but some sort of scuffle ensued and, refusing to miss an opportunity to punish the scoundrel who had been such a thorn in everybody’s side, one of the King’s men mortally wounded Tyler. This confused Wat’s posse, who were under the mistaken impression that aristocrats were chivalrous.

The rebels nearly attacked right then and there, but King Richard soothed them, telling the crowd to head up to Clerkenwell and everything would be cool. They did as their king commanded, never guessing Wat Tyler was going to be beheaded, which perhaps was a moot point anyways as he’d been mortally wounded in the scuffle.

The crowd soon discovered the real deal very shortly when the King’s crew rode up with poor Wat’s head impaled on a stick. They also learned that the promises of a King didn’t mean jack, as His Majesty informed them, “Serfs you have been and are; you shall remain in bondage, not such as you have hitherto been subjected to, but comparable viler.”

Of course, that pompous threat carried little weight in the aftermath. Like it or not, the nobility still needed the serfs to grow their food, and the Black Death made the work force smaller by almost half. Things certainly didn’t suddenly get super-awesome for the peasant class, but, in the end, the ancient feudal system died with the millions that perished in the Great Plague of 1334-51.