The 72 Second Message from Outer Space 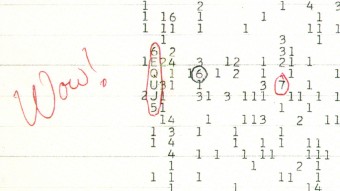 On August 15, 1977, in Delaware, Ohio, SETI researchers from the Ohio State University detected a 72 second radio signal originating from somewhere around the constellation of Sagittarius. Because of the signal’s location, frequency and unique signature, it was quickly dubbed the “Wow!” signal, and since its discovery, speculation has run rampant that it was a message from an extra-terrestrial intelligence.

In the latter half of the 20th century, Ohio State University operated a relatively large radio telescope known as the Big Ear. Built over an area about 1.5 times the size of a football field, the Big Ear had two, gigantic bullhorns that received radio signals from outer space. With its simple design, Big Ear could only intercept signals in a straight line, such that once the Earth rotated away from a signal (which took about 72 seconds), it would be lost.

Big Ear’s two horns worked in coordination. Side-by-side, they usually gathered essentially the same signal, but each had a slightly different focus since they received the signal about two minutes apart. Notably, with the Wow! signal, only one of the ears detected it, which has caused scientists to conclude that either the signal began after the first horn had cleared that part of the sky, but not the second, or ended before the second ear reached that portion of the sky.

In addition, because of Big Ear’s limited range and the rotation of the Earth, scientists have no way of knowing for how long the 72-second signal had been transmitting, other than it was less than 24 hours (the signal could have begun just after Big Ear’s reception area passed that point in space on the August 14, or it could have ended just before Big Ear came back around on August 16).

All signals gathered by Big Ear were recorded as a series of numbers and/or letters that reflected the signal’s intensity. These were printed on paper that volunteers would peruse, often days later.

One of these volunteers, Jerry Ehman, was looking over the printout for August 15 when he noticed an unusual sequence of letters and numbers, “6EQUJ5.” This was significant and notable for many reasons, including that it was surrounded by recordings of signals, none of which even came close to that level of intensity.

The frequency of the signal in question was also unique, and singular, at approximately 1.42 GHz. This lies very close to the hydrogen line (the frequency at which hydrogen resonates).

Regardless of whether it was the signal’s association with the hydrogen line, or its intensity, when he spotted it, volunteer Jerry Ehman circled it and wrote “Wow!” next to the “6EQUJ5” on the print out sheet. Since everyone agreed with his assessment, the signal has been known as Wow! ever since.

A Glitch or Misinterpretation?

Although several Earth-based explanations for the signal have been proposed, most of these have ultimately been rejected.

This possibility has been ruled out since natural emissions generate static that appears on other frequencies, while Wow! was associated with no static and was transmitted on a single frequency. 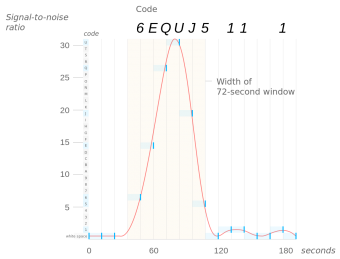 Two objections to this theory have discredited it. First, the 1420 MHz frequency has been banned for use by terrestrial broadcasters since before Wow! was observed, so no one should have been using it.

Second, the satellite would have had to be located in just the right place, and moving precisely in line with Big Ear, to duplicate the signal. Given the two, most scientists have disavowed the satellite theory.

A Message from E.T.?

The signal’s frequency, being so close to the hydrogen line, is significant for extra-terrestrial researchers. Many assert that since hydrogen is the most common element across the universe, other intelligent life may choose to use it to communicate.

That the Wow! signal was an attempt at communication is bolstered by the fact that the area of space where the signal originated has no close radio sources (like a star).

Encouraged by the Wow! signal, in the years since its discovery, scientists have continued to observe that portion of the sky, but despite dozens of attempts, no other messages have been received from that location. Some use this as an indicator that it probably wasn’t from aliens, as they speculate the aliens would have sent the signal repeatedly. But, after all, we humans have sent similar such signals before only once.

Nonetheless, hope is eternal, and the bandwidth around the hydrogen line, specifically, 1400 to 1427 MHz, remains protected, so that no one from Earth may transmit along those frequencies.

That said, if Wow! was sent by space aliens, scientists speculate that they would have had to use approximately a 2.2 gigawatt transmitter, over 800 times more powerful than the strongest radio transmitters on Earth. Perhaps another reason why they might not repeat the signal.

Thirty-five years to the day after Wow! was received, on August 15, 2012, the Arecibo Observatory and the National Geographic Channel organized a response.

Comprised of videos and more than 10,000 Tweets, a digital message from Earth was transmitted into space in the direction of the original Wow! signal, which perhaps many tens of thousands of years in the future might reach the signal’s origin point. Of the thousands who sent their most heartfelt tidings to our potential space neighbors, perhaps the most practical came from comedian, Stephen Colbert, who told the universe: “Greetings . . . on behalf of all the peoples of the Earth . . . we are not delicious. In fact, we’re kind of gamey, and we get stuck in your teeth.”