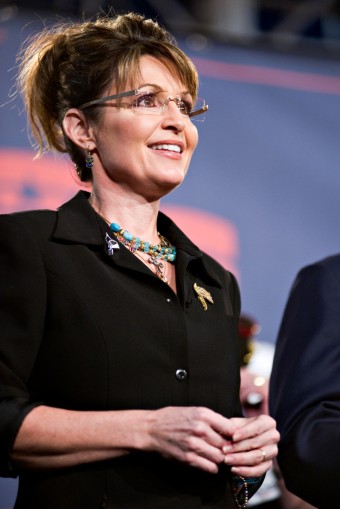 Sarah Palin never said “I can see Russia from my house.” Tina Fey did, in a hilarious skit on Saturday Night Live. Former Alaska Governor Sarah Palin, on the other hand, said something a little bit different from which the Tina Fey line derived.

When Palin was introduced as the running mate to Arizona Senator John McCain at the Republican National Convention in the late summer of 2008, her rousing speech and star power gave a boost to his campaign for the Presidency of the United States.

On the campaign trail, one of her duties as a Vice Presidential candidate was to sit down with journalists to demonstrate her expertise in both domestic and foreign policy. During one such interview in September of 2008, ABC’s Charlie Gibson posed this question: “What insight into Russian actions, particularly during the last couple of weeks, does the proximity of this state give you?”

To which she gave an earnest, but widely ridiculed, response: “They’re our next-door neighbors. And you can actually see Russia, from land, here in Alaska, from an island in Alaska.”

Subsequent investigations demonstrated that Russia is visible from an Alaskan island, Little Diomede, that sits in the center of the Bering Sea, well north of the Aleutian Islands. Of course, later reports said that Palin had never visited the place, but her answer was technically correct, albeit demonstrating the time honored political practice of saying words that loosely are associated with a posed question, but not actually answering it.

Her quote was seized upon, and the SNL parody came just days later. Desperate to rehabilitate her image as someone competent in American foreign policy, she gave an interview to Katie Couric at the end of September:

Couric: “You’ve cited Alaska’s proximity to Russia as part of your foreign policy experience. What did you mean by that?”

Palin:  “That Alaska has a very narrow maritime border between a foreign country, Russia…”

Couric: “Well, explain to me why that enhances your foreign-policy credentials?”

Palin: “Well, it certainly does, because our, our next-door neighbors are foreign countries, there in the state that I am the executive of . . . . It’s very important when you consider even national security issues with Russia. As Putin rears his head and comes into the air space of the United States of America, where do they go? It’s Alaska. It’s just right over the border. It is from Alaska that we send out those to make sure that an eye is being kept on this very powerful nation, Russia…”

Despite this rocky start, Governor Palin rebounded, and her performance during the Vice Presidential debate was widely commended. Nonetheless, the Republicans lost that year to the juggernaut of President Obama’s “Yes We Can!”

Nearly six years later, as Russia invaded and annexed Ukraine’s autonomous republic, Crimea, Palin felt vindicated: “I could see this one from Alaska. I’m usually not one to Told-Ya-So, but I did . . . . Anyone who carries the common sense gene would know that Putin doesn’t change his stripes…”

The “common sense gene” comment aside, in this case, she was not only referencing her “see Russia… from and island in Alaska” comment, but also a statement she made in 2008, “After the Russian Army invaded the nation of Georgia, Sen. Obama’s reaction was one of indecision and moral equivalence, the kind of response that would only encourage Russia’s (Vladimir) Putin to invade Ukraine next.”