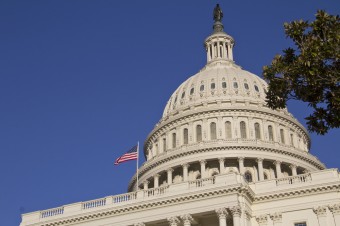 The Statue of Freedom sitting atop the dome of the U.S. Capitol building in Washing D.C. has more alternate names than the obscure half of the Wu Tang Clan. Over the years, the names attributed to it have ranged from things like “Freedom Triumphant in War and Peace” to the far simpler, “Armed Freedom“. However, the one, common thread is that the statue is supposed to represent the very spirit of freedom itself. Ironically enough, it was a slave who was integral in assembling it.

Lady Freedom stands at just shy of 20 feet and weighs in excess of a scale shattering 15,000 pounds. She carries a sword, a shield and a laurel wreath; freedom is a lady you wouldn’t want to mess with.

Freedom’s helmet is also noteworthy; originally Thomas U. Walter envisioned a 16 foot high statue holding a liberty cap (the historical symbol for freed slaves), even sketching designs for such a statue. When Thomas Crawford was commissioned to design a statue to sit atop the dome in 1855 his preliminary sketches and ideas also featured a female figure wearing or holding a liberty cap.

Prior to that, however, Crawford had envisioned a much simpler statue of a female figure wearing a wreath and a laurel. However, when Montgomery Meigs, the Construction Superintendent of the Capitol, sent Crawford plans for the dome, he realised his statue needed to be much bigger. In response, Crawford sketched up plans for yet another female figure carrying the familiar wreath, sword and shield combo wearing a liberty cap covered in stars.

Upon seeing this design including the symbol for emancipated slaves, future Confederate president and slaveholder Jefferson Davis, the guy overseeing construction, objected to the inclusion of a liberty cap. Davis stated that the liberty cap’s “history renders it inappropriate to a people who were born free and should not be enslaved”. He ordered that the design be changed.

For his final idea, Crawford scrapped the liberty cap, as per Davis’ request, and instead gave Freedom the eagle adorned Roman war helmet she wears to this day. As with everything else, the helmet is symbolic; besides being a symbol of war, its design is reminiscent of the headdresses of the Native American people who called America their home first.

So where does a slave come into this? Well, Crawford unexpectedly dropped dead in 1857 just after finishing the full size plaster model of Freedom. Since Crawford was in Rome, the task of shipping the statue fell to his widow. The statue itself wouldn’t get to America until 1859, two years later. On arrival, it was hastily stuck together by an unnamed Italian sculptor so that it could be admired before casting. A year later, in 1860, a local foundry owner and sculptor, Clark Mills, was award the contract to turn Freedom into a fully-fledged bronze statue.

However, there was one small problem; no one knew where the joints in the statue were, as they were now concealed by a layer of plaster. Since Crawford was dead, any damage to the statue whatsoever was absolutely out of the question. When Mills approached the Italian sculptor who’d originally assembled and plastered Freedom, the sculptor said he’d happily tell Mills where the joints were, for a price.

Although Mills was being paid handsomely for his work ($400 per month, or about $10,000 today), and besides that his costs were being footed by the government, he decided pass up on the Italian sculptor’s offer and to figure it out on his own. This is where his slave, Philip Reid, came in.

Reid was one of Mills’ most trusted workmen and after looking at the statue for a few moments, Reid proposed a simple way of finding out where the joints were. The solution he came up with was to attach a rope to the statue’s head and very gently pull till the seams were revealed. This worked, and they were able to disassemble the statue without the Italian sculptor’s help.

Reid didn’t just help with finding the joints; he also worked at the foundry where Freedom was cast. Due to being a slave, though, Reid was only paid for his working on Sundays. Of course, the government still subsidised Mills for the other 6 days his slave, Reid, worked.

By all accounts, Reid was a talented individual. Due to his skills and work-ethic (working 33 Sundays the year the statue was cast, besides the other six days of the week), he managed to earn more than his non-slave co-workers on those days he was paid, $1.25 per day (about $31.95 today) compared to the $1 per day everyone else was being paid. As far as the documented records indicate, Reid was the only slave working on this particular statue.

Reid was also instrumental in the first bronze statue ever cast in the whole of the United States, that of Andrew Jackson riding a horse. As a testament to their ingenuity, Reid and Mills accomplished this without any formal training in bronze casting.  In fact, it was the success of this casting that secured Mills the Freedom commission in the first place.

Though he was a slave for much of the time the statue was being designed and cast, when it was finally placed atop the Capitol Building on December 2, 1863, Reid was a free man thanks to Congress passing an act abolishing involuntary servitude in Washington D.C.  Lincoln signed this act on April 16, 1862. When this happened, Mills attempted to get compensation for the loss of Reid from the government stating, Reid was “aged 42 years, mullatto [sic] color, short in statue, in good health, not prepossessing in appearance but smart in mind, a good workman in a foundry.” Mills asked for $1,500 (about $34,000 today), but only received $350.40.

One of the last pieces of documentation concerning Reid comes from 1865, and it simply says,  “Mr Reid, the former slave, is now in business for himself [as a plasterer], and highly esteemed by all who know him“. We presume they forgot to add, “It’s about time“.