The Origin of the Phrase “Coin a Phrase”

May 26, 2014 Emily Upton
Shannon asks: Where did the phrase “coin a phrase” come from? Thanks! 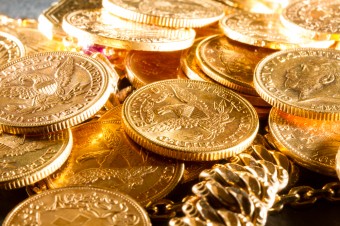 For those unfamiliar, “to coin a phrase” traditionally means “to create a new phrase.” These days, “coin a phrase” has also taken on a new meaning, first documented around the mid-twentieth century: “to introduce a cliché sentiment.”

Funny enough, we have no idea who first coined the phrase “to coin a phrase,” but there are some clues as to how the phrase evolved.

The verb “to coin” first came about when referring to the actual process of making money. Around the fourteenth century, the noun “coin” actually meant “wedge,” and referred to the wedge-shaped dies that were used to stamp the disks that were then “coined,” and made into official currency.

From there, the verb “to coin” started to refer to anything that was made into something new. By the sixteenth century, coining new words became quite popular, though it wasn’t always considered a positive, innovative thing. In 1589, George Puttenham wrote in The Arte of English Poesie: “Young schollers not halfe well studied… will seeme to coigne fine wordes out of the Latin.”

As you can see, some people looked down at word and phrase coiners. If you’ve ever been published on a major website, you’ll know that today a very vocal minority still feel the same way about any innovative use of grammar, creation of words, or (God-forbid) typos. 😉

The greatest of all scourges to Grammar Nazis and the snootier members of academia was Shakespeare, who ultimately came up with many different words and phrases that are still in use today. He didn’t coin the phrase “to coin a phrase,” but he did use “coin words” in 1607 in his play Coriolanus: “So shall my Lungs Coine words till their decay.”

Of course, up until this point, we’ve been talking about coining words rather than phrases. “To coin a phrase” popped up quite late in the game, at least the first known documented instance of it. The earliest published instance of “coin a phrase” appears in The Southport American, a newspaper in Wisconsin, in 1848:

Had we to find… a name which should at once convey the enthusiasm of our feelings towards her, we would coin a phrase combining the extreme of admiration and horror and term her the Angel of Assassination.