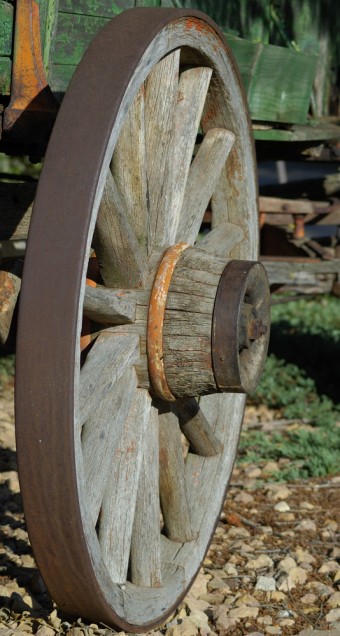 Today I found out the origin of the phrase “jump on the bandwagon.”

For those not familiar, when you jump on the bandwagon, it means you begin supporting a hobby, idea, person, etc. after it has become popular or successful.

The word “bandwagon” is the rather unimaginative name for a wagon that carried a circus band. It first appeared in print in the equally unimaginatively titled book The Life of P.T. Barnum, Written by Himself, which was published in 1855:

At Vicksburg we sold all our land conveyances excepting our horses and the ‘band wagon.’

P.T. Barnum is the famous circus owner and showman Phineas T. Barnum. Back then, circuses were known for their showy parades through town before they set up. These parades attracted villagers’ attention and acted as an easy marketing ploy to get people to go to the circus. Bandwagons were part of those parades. Bright and ornamental, they were impossible to miss.

Toward the end of the 1800s, people had caught on to the fact that bandwagons snared an audience’s attention. Politicians started to use bandwagons in parades through towns on their campaign trails. It’s believed that Dan Rice, a famous circus clown, was the first to rent out his bandwagon to a political campaign.

As a campaign became more and more successful, other people and politicians sought to rent seats on the bandwagon and ride it through town. In doing so, they received face time with the public and believed that the success of the original campaign would rub off on them.

There are records of the phrase used in political speeches throughout the 1890s, usually in the form of warning potential voters not to “jump on the opponent’s bandwagon in haste.” Because of the negative connotations associated with the phrase, many didn’t admit to having a bandwagon of their own despite it becoming common.

Over time, the phrase stopped meaning the literal riding of a bandwagon and started to refer to jumping into anything that was popular. It’s unclear exactly when this transition occurred, but Teddy Roosevelt made a reference to it in Letters, 1899, (later published in 1951):

When I once became sure of one majority they tumbled over each other to get aboard the band wagon.