April 25, 2014 Melissa
Skyrunner asks: Where do insects disappear to in the winter time? 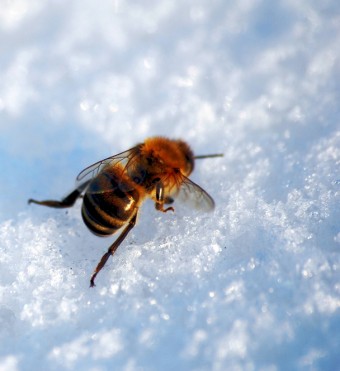 As ectothermic or so-called “cold-blooded” creatures, insects are particularly susceptible to winter’s freezing temperatures. To survive, this class of life form has developed a wide variety of adaptations in order to keep on keeping on.

To begin with, perhaps the best-known tactic is simple migration, with the best known of these arguably being the Monarch Butterfly. Each autumn, between August and October, certain of these butterflies located in North America pack up and head south. Those who summer east of the Rocky Mountains often spend the winter in Mexico, while those who summer west of the Rockies winter in California.

Next up we have the much more interesting adaptations of a form of hibernation, freeze avoidance, and freeze tolerance.

Given many bugs eat leaves and other such things that are scarce in the winter, an alternate to continuing to attempt to scrounge for food is to find some form of shelter and then to enter diapause, which is more or less a sedate state of arrested development.

This solves the nutritional problem, but there’s still potentially the whole issue of sub-zero temperatures. To get around this,  during this stage, bugs may do things like reduce the water level in their bodies, sometimes even to the extreme like the Antarctic midge, which simultaneously accumulates sugars in their cells to lower the freezing point of remaining water, while also reducing the amount of water to a state of almost total dehydration, further increasing the concentration level of the sugars.

On that note, it turns out that many bugs accumulate cryoprotectants (in layman’s terms- anti-freeze) in the winter, often glycerol. This essentially works via glycogen breaking down more and more into glycerol as the temperature drops lower and lower. As the accumulation of this in their cells and body fluids increase, so does their freeze avoidance capabilities.

In addition to making their own Prestone, these insects may also create an environment in their bodies that is not ideal for the formation of ice nucleation in the first place. For those unaware, for ice to form at temperatures encountered by most living things, it needs a nucleation site- some small particle to form off of. Without it, water can actually go well into negative temperatures without freezing.

Taking advantage of this fact, many freeze avoidant insects have processes that reduce such particles in their bodies, such as food bits, microbes, even certain proteins that would serve as nucleation sites. This can be accomplished in such ways as ceasing to eat to clear out their digestive tract, as well as getting rid of lipoprotein’s in their equivalent of blood (heamolymph).

Of course, this all only goes so far, so freeze avoidant insects often also need to find shelter.

Those insects that spend the winter attached to a branch or twig, like the Goldenrod Gall Moth caterpillar, may also use the plant’s natural defenses to create their winter igloos: in this case, as the insect is attaching itself, the plant produces a cancer-like growth in defense, called a gall, which in turn will form around the creature and help protect it from the weather.

In addition, many species winter as eggs or larvae, either in protected cocoons, underneath piles of leaves or the like, or may simply burrow into the soil to take advantage of the ground’s slightly more temperate and regulated temperatures. This is also a much safer place to be in the winter thanks to the extra protections the potentially frozen ground offers from hungry animals like birds.

Beyond burrowing into various places for protection from the elements, some go even further to group together for added protection and warmth, such as ladybugs, who tend to huddle together and stack on top of each other inside some protected area such as cracks in building walls, or under rocks, etc.

Similarly, social insects like ants and termites will create deep underground colonies, sometimes well below the frost line. Here they store ample food and keep themselves busy chowing down and working to keep the colony temperature warm enough.

Perhaps the most fascinating instance of this sort of thing is honey bees. Up until very recently, it was thought by many scientists that Honey bee hives were kept warm by pupae in the brood and that the bees would often congregate there to warm themselves up from the pupae.  Recently, this was found not to be the case when a new Honey bee job was discovered, that of “heater bees.”  Bees of almost all ages can perform this function by either vibrating their abdomens or they can also decouple their wings from their muscles, allowing them to vigorously use these muscles without actually moving their wings.  This can heat their bodies up to about 111° Fahrenheit (44° C), which is about 16° F (9° C) hotter than their normal body temperature.

Normally, Honey bee jobs are primarily “assigned” based on their age. However, if the hive needs more bees that are naturally inclined towards house keeping jobs or foraging, the heater bees can adjust the temperature of certain cells to accommodate this.  Raising the temperature of a cell to 95° F (35° C) rather than the normal cell temperature of about 93° F (34° C) will produce bees that are more inclined to prefer foraging jobs, over housekeeping ones, and vice-versa; so they’ll be more reluctant or more eager to change jobs than other bees their age, depending on their former cell temperature.  This helps make sure that the needs of the colony can always be met given the current state of the hive and environment.

Going back to heating the hive in winter, as the temperature drops, the bees all clump together towards the middle of the hive, surrounding the queen.  At this time, they allow the temperature of the hive to drop to around 81° F (27° C) on the inside of the cluster to conserve energy. Bees on the outer parts of the cluster, which will usually be kept at least around 48° F (9° C), then occasionally rotate with the bees on the more crowded inner parts, so that all the bees have a chance to keep warm enough to survive. Once the queen starts laying again, the temperature of the inner part of the hive will be raised back up to about 93° F (34° C).

Despite their strenuous efforts, bee colonies can potentially become completely lost or lose most of their members to the cold of winter, particularly if they didn’t manage to store up enough honey or certain creatures higher on the food chain take too much from them.

Moving on, some insects don’t enjoy the luxury of sitting the winter out and must remain more directly active. For example, species like mayflies, stoneflies and dragonflies winter as nymphs (an immature stage that resembles the adult stage), and unlike their other relatively sedate cousins, these continue to eat and grow throughout the winter, often having even greater cryoprotectants, among other adaptations, to allow for lower temperatures to further allow them to remain active without as much risk.

This brings us around to not just freeze avoidance, but freeze tolerance. These insects have adapted to be able to turn into little insect icicles temporarily and then be thawed and go along their merry way later. As you might imagine from this, some of these types are being studied for potential application for cryogenically freezing humans without damaging cells and tissues and the like.

Also interesting is that freeze tolerant insects are significantly more common in the Southern Hemisphere (85% of insects there vs only 29% in the Northern Hemisphere). It’s thought this is the generally warmer climate, but where random cold snaps can cause temporary plunging of temperatures into the freezing levels where the insects must be able to handle the large and sudden drop.

While there are a variety of ways freeze tolerance can potentially be achieved in a given insect, many of which aren’t fully understood, in the general case, they accumulate their particular anti-freeze chemicals often in such a way that the cells themselves don’t freeze, but the haemolymph around them do. When the ice does form, it also then provides something of a buffer layer to help keep the rest of them from freezing.

As to the exact mechanism their bodies use to further prevent damage to cell membranes in such freezing cases, this isn’t yet fully understood, though in many it does appear that they also use protein ice nucleators to help not just control the location, but rate of freezing, allowing their cells and tissues to more slowly adjust to the freezing process rather than instantly freezing at a certain point.

One of the more extreme examples of this is the Pythidae beetle which can continue to keep itself from turning into a popsicle all the way down to about -54 degrees C (-65  F), at which point ice will form around the cells, but not within them, allowing them to survive for a time at even lower temperatures.