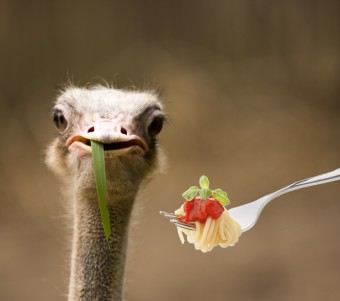 The date was April 3, 1919. The location was the South Side Pavilion in sunny Jacksonville, Florida. The occasion was a much-hyped competition of gastronomical strength between Ping Bodie, the five foot eight and 190 pound New York Yankee outfielder, versus the “world’s greatest eater,” an ostrich named Percy. They were to engage in a spaghetti-eating contest to determine, once and for all, who was Earth’s most prolific eater- man or ostrich. But before we recap how Bodie fared when he went beak to beak with his feathered foe, let’s see how we got here – to how and why  a baseball player named Ping Bodie faced an ostrich in a spaghetti eating contest.

Ping Bodie was actually born Francito Sanguenitta Pezzolo to an Italian-American immigrant family in San Francisco on October 8, 1887. There seems to be several different tales on how Francito earned the name “Ping Bodie.” Bodie himself said once that the name came from a family friend who had been nicknamed that, but didn’t like it and pawned it off to little Francito. Other stories claim that he received the nickname because that was the sound the ball made as it came off his mammoth 52 ounce bat, though of course wood bats don’t make that noise, so we’ll trust Francito on this one.

As for the surname “Bodie,” Ping’s brother, Dave, explained in a February, 1912 letter to the editor of the magazine Sporting Life that “Ping” wanted to change his name to something less ethnic because he felt was going to be“ridiculed.” After all, he was one of the first Italian-Americans to reach the major leagues. So, he chose Bodie – the name of a silver mining town known for its salons and gunfights that his father and uncle lived in for a time. W.O. McGeehan, the famous New York Herald Tribune sports writer who also originally hailed from San Francisco, claimed that Bodie built up his strength at an early age by rolling heavy rocks down Telegraph Hill to “keep their territory free from invaders.”

Ping was a slugger from the start, beginning his professional baseball career in the California League in 1908 and then joining the legendary San Francisco Seals (the DiMaggios played for them as well, albeit 24 years later) in 1909. He was called up by the Chicago White Sox in 1911 when the owner, Charles Comiskey, complained the Sox weren’t hitting; Bodie went into his office and told him, “You want some hitting, put me in the lineup.” He did and Bodie hit, earning the nickname “Fence-Buster.”

He soon clashed with with the White Sox manager and was traded back to the Seals before finding his way to the Philadelphia A’s, where he once told the press that the A’s were so bad that “I and the Liberty Bell are the only attractions in Philadelphia.” Always modest, he was finally traded to the New York Yankees.

As you might guess from all this, Bodie was naturally gregarious and loved being the center of attention. So, he was paired up with another larger than life personality as a roommate – Babe Ruth. The Babe was, already by then, well-known for his tendency to hit the town. So, when a reporter asked Ping what was it like to room with the biggest star in the game, his response was honest, “I room with his suitcase.”

He’s also credited as being the inspiration for the ballplayer in the book (and, eventually, comic strip) You Know Me Al by Ring Lardner. The book consisted of “letters” written by a fictitious White Sox pitcher named Jack Keefe to his friend. In the letters, he reveals to Al all the shenanigans that went with being a baseball player and his obliviousness to the fact that he was being taken advantage of by everyone around him.

As for Percy, he was probably Jacksonville’s most famous ostrich. He had been touted by the Jacksonville Chamber of Commerce as the “world’s greatest eater,” likely as a way to promote the city’s zoo, which had only opened five years prior in 1914. In fact, Jacksonville was in the midst of it’s run as the “Winter Film Capital of the World.” Before Los Angeles became the center of movie production, silent movies were filmed either in New York during the summer months or Jacksonville, Florida in the winter. It’s warm climate, exotic-looking locations, rail access, and cheap labor encouraged over thirty silent film studios to be established in the small northeast Florida city during that time.

Additionally, Jacksonville had been home to spring training baseball since 1898 and the residents loved having the ballplayers in town. So, when the co-owner of the Yankees, Colonel T.L. (Cap) Huston, heard that the city was touting their long and slender ostrich as the best eater in the world, he knew they would play along when he offered up a challenger in the form of Ping Bodie.

The match wasn’t widely advertised due to the fear that it would arouse anger from animal lovers, but by all accounts the local Jacksonville hall was packed with spectators for the vent. Bodie, given that he was the challenger, was allowed to choose the food. Percy raised no objection.  Bodie’s choice was spaghetti. Members of Jacksonville’s Chamber of Commerce who had wagered quite heavily on Percy did not like this pick.

After the first three bowls, man and ostrich were neck and neck. It was said that Percy “gobbled his third bowl of spaghetti with such gusto that he accidentally swallowed (the manager’s) pocket watch and chain while the manager was timing him.”

By the fourth bowl, “Percy’s sides had begun to swell visibly.” At the sixth bowl, several female spectators headed for the exit not wanting to see what would happen to the poor bird. By the eighth bowl, it was becoming clear that Bodie was going to win the battle. But, still, the bird kept going.

During the tenth bowl of spaghetti, a spectator supposedly yelled “Do you want your bird killed?” Finally, as Percy ate his eleventh bowl of pasta, he stopped eating, staggered off and collapsed. Bodie finished his bowl, emerging the victor, supposedly stating “When the timekeeper counted to ten, the ostrich keeled over, never to rise again.” The ostrich supposedly died.

Of course, whether that’s exactly what really happened or that the victory was slightly embellished by those covering the event for effect is up for debate.  For instance, I’m *guessing* Percy didn’t actually eat the manager’s watch. And it seems odd that the ostrich would choose to eat itself to death, rather than just stop when it was full up.  But an ostrich staggering away and keeling over does make for a better story than one that simply stops eating.

For reference,  ostriches typically eat about 8 pounds of food per day, processing it in their three stomachs, including a gizzard which seemingly would have little trouble grinding up pasta. Their gizzard can hold at any given time about 2-4 pounds, nearly half of which is generally rocks and sand used for grinding the food.  They also aren’t super picky about what they eat, consuming plants, seeds, roots, insects, and small animals- pretty much whatever plant or animal they can fit in their gullet, they may try to eat if they feel so inclined.

Whether the ostrich actually died from the event or not, reports all agree that Bodie won (possibly more to do with lack of competitive spirit in the ostrich than that Bodie’s stomach could hold more than the ostrich’s. But perhaps the massive amount of pasta really didn’t agree with Percy’s digestive system in some severe way.  Given ostriches eat grains just fine, this seems unlikely though.  Any ostrich experts out there, please do ring in on this one in the comments below).

Bodie made his last Major League Baseball appearance with the New York Yankees in 1921. He played for several more seasons for his hometown Seals until retiring for good and moving south, to Los Angeles. He became a Hollywood electrician mostly on the Universal Lot and even dabbled in acting in a few films. He was rumored to be friends with many members of Hollywood royalty, including Carole Lombard and Lon Chaney Jr.

To the day he died, in 1961, he still loved talking about how he could “whale the old apple and smack the old onion.” Presumably, this means hitting a baseball. But to others he will always be known as the ball player who beat an ostrich in a spaghetti-eating contest.