The Origins of the Names of the Historic Scottish Counties 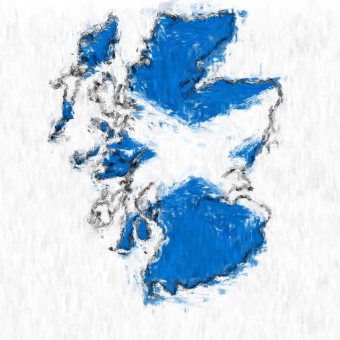 Angus is believed to be related to the Irish Aonghus, which means “one choice.” Angus cattle originated in the county in the mid-1840s.

It is believed that Argyllshire developed from the old Irish airer, which means “country.” All up, the name means “country of the Gaels.” The Campbell clan ruled Argyll, and their tartan is thought to have inspired the Argyle pattern. Argyle socks date back to 1935.

County Ayr’s name came from the River Ayr, which runs through it. Ayr is thought to come from the Celtic root ar or adh’ar, which means either “clear” or “rapid,” characteristics of the river.

The suffix “wick” comes from wic, which simply means a dwelling or farm. The “Ber” part of the name is up for some debate. Many sources claim that it comes from the word bere, which meant “barley,” making the name mean “barley farm.” Others claim it stems from the word bear, a chieftain called Beryng, or a castle called Bar.

Buteshire is another name whose etymology we can only guess. One of the most likely origins is that it came from the Old Irish bót, which means “fire,” possibly referring to signal fires on the beaches of Bute.

The suffix “ness” means “headland.” The origins of “Caith” aren’t clear, but legend has it that Cait was the son of the Pictish king Cruidne filius Cinge. Cait settled in what would be known as Caithness, or “Cait’s Headland.” Alternatively, the name could come from the word Cruithne, which is what the Irish called the Pictish people of Scotland. Cruith meant “shape” or “design,” possibly referring to the tattoos the tribes bore.

Clackmannan comes from Clach Mannan, which means “stone of Manau.” The stone refers to an old monument that was built there. Manau, or Manaw, was an ancient kingdom in the area that stretched north and south of the Firth River. Unfortunately, it isn’t known what Manau means.

The name Cromarty is derived from the Gaelic words crom, which means “crooked,” and either ard, which means “height,” or bati, which means “bay.” As the name used to be Crumbathyn, the latter seems more likely, making this place name mean “crooked bay.”

Most likely, Dumfries is a combination of Dun Phris. Dun means “fortress,” while phris means “thicket.” So, Dumfries means “fortress of the thicket.” It’s also possible that it means something along the lines of “Friar’s Hill” based on the idea that St. Ninian might have founded a monastery in the area.

Like Dumfries, the dun in Dunbarton means “fortress.” The barton is a form of breatainn, which means “Britain.” So, Dunbartonshire was named after a British fortress situated in the area.

Lothian is named after Loth, a legendary Pictish King who ruled in the 500s A.D. He was known for being vengeful, as told in a story about his only daughter who had fallen in love with a shepherd.

It isn’t known exactly where Fife comes from. It’s possible that it is derived from the German word “pfeife,” which means “pipe.” It’s also possible that, like Caithness, it’s named after one of the legendary seven sons of Cruidne named Fib.

Kincardine comes from the Gaelic ceann, meaning “head,” and the Pictish cardden, meaning “thicket or garden.” The “head” likely means “headland” rather than “body part” as the county is on the coast.

The prefix kirk means “church.” You’ll find a lot of kirks around Scotland. Cudbright is a mispronunciation of St. Cuthbert, who was famous for his piety and obedience, as well as had several miracles attributed to him after his death.

Basically the same origin as East Lothian, but just “mid”- Lothian is named after Loth, a legendary Pictish King who ruled in the 500s A.D. He was known for being vengeful, as told in a story about his only daughter who had fallen in love with a shepherd.

It isn’t known exactly how Moray got its name. It’s an anglicized version of the Gaelic Mhoireibh, and unfortunately we don’t know its meaning.

Nairnshire got its name from the River Nairn, once known as the River Narann. The exact meaning of the river’s name is unknown.

The Orkney Islands were given their name by the Vikings, whose word for island was ey. The orkn part of the name means “seal” (and sort of sounds like one too!) So, the Orkney Islands are the “seal islands.”

Peebles is an anglicised version of the Welsh pebyll, which means “tent” or “pavilion.”

Perthshire comes from the Gaelic word peairt, which means “copse.” In addition to being a historical county in Scotland, Perth is the name of the capital of Western Australia.

Renfreshire gets its name from the Gaelic words Rinn Friu, but unfortunately we once again can’t be certain what that means.

Ross, like Kinross, comes from the word rois, which means “wooded.”

Roxburgh gets its name from the Old English hrocas burh, which means “village of the rook” or “village of Hroca,” with Hroca being the name of a person. Interestingly, these Old English words are also where we get the word “rugby” from. (See Why Soccer is Called That in America)

The kirk in Selkirkshire means “church.” The Sel comes from the Selgovae tribe who lived in the area. The county gets its name from the “church for the Selgovae.” Selgovae is believed to mean “the hunters.”

Stirling comes from the Gaelic sruighlea, which either means “battle” or something along the lines of “Melyn’s dwelling.”

You can probably guess that Sutherland means “south land.” Interestingly, it isn’t in the south of Scotland at all, but is one of the northernmost counties. It’s thought that the Norse named it Sutherland because it was more southern than the Orkney Islands.

Again, like “East Lothian” and “Midlothian”- Lothian is named after Loth, a legendary Pictish King who ruled in the 500s A.D. He was known for being vengeful, as told in a story about his only daughter who had fallen in love with a shepherd.

The wig in Wigtown is thought to have originally been wic, the word for “farm.” It’s basically “Farm Town.”