Why Hubble Has a Telescope Named After Him

February 4, 2014 Emily Upton
Nissi U. asks: Why is the Hubble telescope called that? 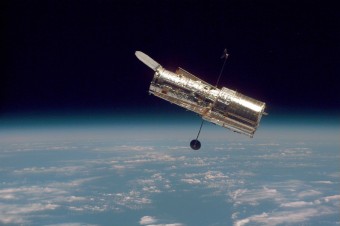 Just about everyone has heard of the Hubble Space Telescope. A space-based observatory on “the highest mountain” the world can provide; it is the technology behind many of today’s great discoveries in space. Started in 1977 and launched into orbit in 1990, it has aided in humans determining the expansion rate of the universe, as well as helping us make numerous other discoveries, both big and small.

The man behind the name is Edwin Hubble. Born in 1886, Hubble enjoyed books like Jules Verne’s 20,000 Leagues Under the Sea, perhaps a prelude to his lifelong dedication to science and astronomy. His family initially lived in Missouri, but moved to Chicago when he was just ten years old.

After high school, Hubble obtained a scholarship to attend the University of Chicago. Also at the university at that time was Robert Millikan, a man who would go on to win a Nobel Prize for physics. Hubble studied under him, working as a lab assistant. Hubble also studied at the University of Oxford where he earned a Bachelor degree in jurisprudence. (His father had wanted him to become a lawyer.)

As if a few stints at a couple of famed universities wasn’t enough, Hubble decided to go back to school at the University of Chicago after a brief period of teaching. This time, he chose a field that would later make him famous: astronomy. (By the way, he also had a degree in Spanish and literature. Not only that, he was an extremely gifted athlete, as you’ll see in the Bonus Facts below.)

Shortly after obtaining his degree, he was invited to start working at the Mount Wilson Observatory. Unfortunately for him, World War I was underway, and he left to serve in France, where he rose to the rank of Major during the war.

Once released from his duty in 1919, he went immediately to California, where he started working at the observatory.

At the observatory, they were just finishing up the final touches on the Hooker telescope, which was the most powerful telescope in the world at the time. While there, Hubble used the 100-inch telescope to prove that there were galaxies other than our own—a solution to what was known as the “spiral nebulae problem.”  At the time, the commonly accepted idea about the universe was that it was just the Milky Way and nothing else. Others had suggested and found some evidence, that these “nebulae” were actually galaxies, but the evidence wasn’t yet strong enough to be widely accepted. 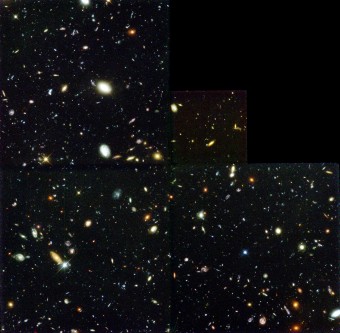 With the help of the Hooker telescope, Hubble was able to provide the needed evidence.  To do this, he took pictures using the Hooker telescope and noted  that some of these “spiral nebulae” contained Cepheid variable stars within them.  Cepheid variable stars can be used to determine distance to the stars based on the luminosity and pulsation period.  Thanks to this, he was able to determine that the Andromeda “Nebula”—to be renamed the Andromeda Galaxy—was approximately 900,000 light years away from Earth, which given its apparent size and distance away, meant that it had to be its own galaxy.

It was later discovered that his calculations were off and the galaxy was actually 2.48 million light years away, but the basic conclusion was still the same.

Before this, there was only the Milky Way in our collective knowledge of space. Thanks to Hubble, for the first time, it was conclusively proven that space was far more vast than we’d ever imagined. Fitting, considering the Deep Field images the telescope named in his honor would return similarly made us all feel that much smaller in our place in the universe with around 3,000 galaxies showing up in a tiny portion of space- one 24 millionth of the sky- that otherwise looked black and devoid of anything.

In addition, Hubble created what is known as the Hubble sequence, a way of classifying different galaxies, which is still commonly used today.

In 1929, with the help of his colleague Milton Humason, Hubble published a theory that the universe was expanding. It would later be known as Hubble’s Law. The pair had found redshifts in galaxies’ light emissions, which demonstrates galaxies are moving away from each other. Ultimately, the universe was getting bigger.

Of course, this is one area where Hubble, perhaps, gets too much credit.  Two years before this, a priest and astronomer by the name of Georges Lemaître had made this same discovery, but using Einstein’s theories applied to the field of cosmology, and even published a paper about it.  He also accurately came up with what would later be called “Hubble’s law” and the value of “Hubble constant,” but from this would be more aptly named “Lemaître’s law” and “Lemaître constant”.  Lemaître’s work wasn’t as well known, however, and was generally dismissed, even by Albert Einstein, who later recanted after seeing Hubble’s work backing what Lemaître had already shown.  As this is an article about Hubble, we’ll hold off talking about Lemaître any more for the time being, particularly as Lemaître is more than worthy of an article of his own (and maybe several), which we’ll get too soon enough.  He is probably the greatest scientist of the 20th century few have ever heard of.

In any event, Hubble’s numerous contributions to astronomy made him one of the most famous astronomers of all time. He earned several awards, including the Medal of Merit, Legion of Merit, Bruce Medal, Franklin Medal, and Gold Medal. His contribution to astronomy was, well, astronomical.

Unfortunately, Hubble didn’t live to see the first man land on the moon. He died of a stroke caused by cerebral thrombosis on September 28, 1953 at just 63 years old. While he had a lot of accomplishments under his belt, what he really wanted was a Nobel Prize, but he was denied one as there was no category for astronomy.  He argued heavily that astronomy should be counted as a part of physics, but it wasn’t until after his death that the Nobel Prize Committee decided he was right about that.  However, someone who is dead cannot win a Nobel Prize, even if their work was more than worthy.

Despite not winning a Nobel Prize, he probably would have been ecstatic to have the Hubble space telescope named after him, which has allowed humanity to look deeper into our Universe than ever before. The famous telescope started out as “the large space telescope.” In 1983, six years after funding was approved, Hubble was the obvious namesake for the instrument which would go on to help mankind make many more discoveries about space. As Hubble once said in a 1948 interview, he hoped “to find something we had not expected,” and the Hubble telescope has done, and is doing, just that.