The Green Children of Woolpit 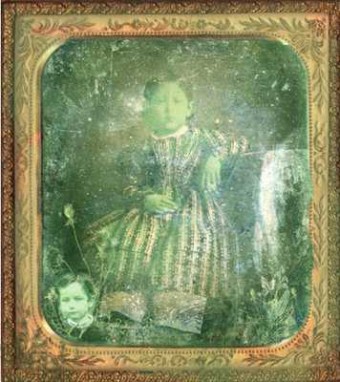 English folklore is filled with green people – the Green Knight, green fairies, the Green Man and Jack-in-the-Green. Two of the smallest were the Green Children of Woolpit.

One year during the harvest in the village of Woolpit in Suffolk, England (about 10 miles from Bury St. Edmunds), reapers working near old wolf pits (deep ditches dug to trap wolves) discovered two apparently lost young children – a girl and boy.

The children had green-tinged skin, wore strange clothes, spoke an unfamiliar language, were siblings, the boy was younger, and both refused to eat regular food like bread (at least at first).

The children were eventually taken to the local bigwig, Sir Richard de Calne, who was equally baffled by them, though took them into his household. Attempts were made to feed them for apparently a couple days, but none were successful until bean plants were introduced, which seemed to be a familiar food to the children and something they readily ate.

However, the boy eventually became sick and died. His older sister had no such problem and eventually even lost the green tinge to her skin as her diet became more diverse and time went on.

She eventually learned English, was baptized, and at some point took the name of Agnes Barre, allegedly having married a diplomat, Richard Barre.

So once she learned English, what did she have to say about where she came from?  There are two contemporary accounts, though neither are first hand accounts and, unsurprisingly from this, differ slightly in the telling. But the general story is that the people she came lived in a place with no sun, but had, to quote, “a degree of light like what is after sunset…”  She and her brother wandered off one day when they were tending their father’s cattle. It was during this time that they discovered a cavern that they subsequently became lost in, finding their way out via following the sound of bells.

When they emerged, they were mystified by the extreme light from the sun and quickly became lost and could not find the cavern again. In their search, they were found as previously described. She also supposedly stated that a land of light was apparently to be seen at a great distance off from her home, which apparently was called “St. Martin’s Land”. She also supposedly stated that a great river separated her home from the land of light.

So is there any truth to any of this? Two contemporary scholars recorded the story: a Benedictine abbot, Ralph of Coggeshall, contributor to Chronicon Anglicanum, and William of Newburgh, author of Historia rerum Anglicarum.

Abbot Coggeshall named Sir Richard de Calne himself as his source, noting “that he had frequently heard the story” from him, while the historian from Newburgh noted that he believed the story because of “the weight of so many and such competent witnesses.”

Assuming the story was true, many have hypothesized as to the origin of the children and their green color, most fancifully some conjecturing that the children were aliens or that they came from another dimension.

Less far fetched, some have posited that arsenic poisoning could account for the children’s green coloring (as well as their lack of appetite and the boy’s poor health). Arsenic has been used in the production of green dyes, and it will discolor the skin in a green-dotted rash. However, if the children presented with a rash, it seems unlikely the villagers would so eagerly take them in rather than fear deadly diseases like leprosy, measels and smallpox.

A more likely cause of the tinge could be chlorosis, a form of anemia characterized by a greenish tint to the skin. Well-known in centuries past (even named by 16th century German doctor Johannes Lange as “the disease of virgins”, with the remedy according to him to have sex). Fast-forwarding to the turn of the 20th century, this was apparently not unheard of in poorly nourished, overworked girls, with the treatment eventually iron supplements. Going back to the green children, given the tinge to their skin seems to have faded as the girl began eating a more diverse diet, this is commonly put forth as a reasonably enough explanation for the odd coloring.

But what about the girl’s supposed description of where she came from? As for the more fantastical elements, like being from a “land with no sun”, this is generally discounted given her young age and likely vague memories later in life when she was recounting the tale. It’s entirely possible she was simply remembering a particularly cloudy time, not exactly uncommon in England.

As for the initial language barrier, it has been proposed that the children were Flemish immigrants and lived in Fornham, which was also known as Fornham St. Martin and is only two miles from Bury St. Edmunds. The church in St. Edumunds, in the 12th and 13th centuries, also had bells that were regularly wrung.

In addition, the River Lark runs near Fornham St. Martin, and the area around Bury St. Edmunds is riven with underground passages from flint mines that had been in the area.

That said, it is noteworthy that the Flemish had been in the country and nearbye for a while, and so some think it unlikely that no one in Sir Richard’s household would have recognized the children’s language.

Furthermore, although there may be passages nearer Woolpit, the major flint mines, Grime’s Graves, are located 20 miles north of Bury St. Edmunds.

In rebuttal to the potential issues with them being Flemish, proponents assert that the children could have even been English but, like many at the time, only spoke their village’s unique dialect, many of which were unintelligible to outsiders.

Thus, perhaps most sensibly of all, historian Derek Brewer in his 1998 book, The Colour Green, states “The likely core of the matter is that these very small children, herding or following flocks, strayed from their forest village, spoke little, and (in modern terms) did not know their own home address. They were probably suffering from chlorosis, a deficiency disease which gives the skin a greenish tint, hence the term ‘green sickness’. With a better diet it disappears.”