Why We Break A Bottle of Champagne Against New Ships

February 4, 2014 Emily Upton
This is an excerpt from our new book, The Wise Book of Whys, available in: Print | Kindle | Nook | Audiobook 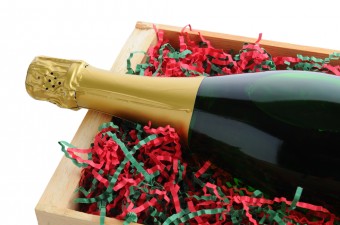 While today breaking a bottle of champagne over the hull of a ship is considered tradition before launching a vessel in certain countries, particularly Britain and the United States, people have been performing ceremonies at launches seemingly as long as humans have made boats.

Like today, this was essentially for the hope of good fortune on the ship’s voyages. For instance, one of the earliest known references to a similar practice when launching a ship goes all the way back about 5,000 years ago when a Babylonian stated, “To the gods I caused oxen to be sacrificed,” before launching a new ship he’d made.

The ancient Greeks, Romans, and Egyptians also called upon their various gods to protect a new ship and her crew upon its initial launch. For example, the ancient Greeks, during their launch festivities, would drink wine to honor the gods and pour water on the ship as a sort of blessing.

The religious aspects of ship christening remained well into more modern times, particularly in Catholic nations. For example, there’s an account of a ship christening by the Knights of Malta in the seventeenth century that describes two friars boarding a new warship, praying, and sprinkling holy water all around the ship before deeming her seaworthy and sending her out into the water.

After the Protestant Reformation, kicking off in earnest after Martin Luther’s 1517 “Ninety-Five Thesis”, certain nations in Europe did away with some aspects of the religious part of the christening. Rather than use religious leaders for this task, members of the monarchy or military leaders would take over the christening duties.

For instance, 65 years before the above Knights of Malta reference, in 1610, the Prince of Wales was present at the christening of the Prince Royal. In this instance, there was a standing cup on board the ship, which is just a large and expensive cup made of some precious metal, usually silver. The Prince took a ceremonial sip of the wine in the cup before throwing the rest of the contents across the deck. The cup was then thrown off the side of the ship to be caught by a lucky observer.

Late in the seventeenth century, the standing cup ceremony was replaced with breaking a bottle of wine over the bow. This switch was in part because the cups were extremely valuable and the British navy was growing rapidly; it just wasn’t practical to continue to give the expensive cups away every time a ship was launched.

As for the switch from wine to champagne, it’s thought that preferences simply switched with the times. Champagne came to be seen as an “aristocratic” choice -for a time in the nineteenth century being more popular than wine among many elite –and, therefore, considered the best option for ship christening. The tradition of using it has stuck around ever since in certain countries.