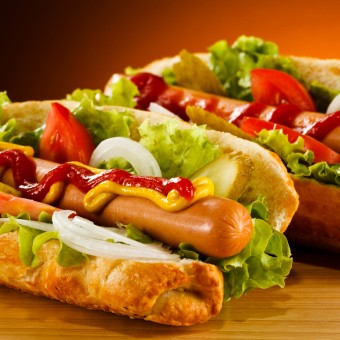 In 1946, Glen Bell left the Marine Corps at the age of 23. Like many of his comrades, he was looking forward to post-war activities and settling into a career when he returned home. Luckily for him, the fast food business was booming, and Bell had an idea: a hot dog stand.

It was called Bell’s Drive-In, and it was set up in San Bernadino, an agricultural town in California. Bell didn’t know the first thing about running a hot dog stand, but that didn’t matter; he learned as he went along.

The first stand did well and when Bell sold it in 1952, he was able to go on to make a bigger, better stand that sold both hot dogs and hamburgers. At this point, Bell wasn’t exactly thinking outside the bun. He did manage to start up his second stand before the McDonald brothers announced their fast food venture—also in San Bernadino. You can probably guess how it went, since McDonald’s is still selling burgers and Bell’s business isn’t.

It was likely because of the increased competition that Bell started to explore alternative menu options. Feeling the pressure to stand out from the crowd, Bell did start “thinking outside the bun” and landed on Mexican food. A big fan of Mexican take-out himself, he thought that Mexican food lovers needed a fast-food option, as people often had to wait a while to get a good taco on the go.

So, Bell began scheming. In his own words,

My plan for experimenting with tacos was to obtain a location in a Mexican neighborhood. That way, if tacos were successful, potential competitors would write it off to the location and assume that the idea wouldn’t sell anywhere else.

With his new location secured, Bell began with what he knew—hot dogs. Both regular hot dogs and chilli dogs were on the menu, and the chilli dogs had a secret sauce on them that would later become the basis for the taco sauce we know today.

While those were selling, Bell was researching tacos and coming up with ways to produce them quickly. Many Mexican food restaurants stuffed the shells, then fried them, which was partially why it took so long. Bell decided he would instead fry the shells and then stuff them, meaning he could have fried shells ready to go before the customers lined up. It took a while to work out all the kinks, but Bell soon hit upon a deep fryer that suited his needs.

I’ll never forget the first taco customer because naturally, I was really concerned about his reaction. He was dressed in a suit, and as he bit into the taco the juice ran down his sleeve and dripped on his tie. I thought, ‘We’ve lost this one,’ but he came back, amazingly enough, and said, ‘That was good, I’ll take another one!’

Business was booming. Bell ended up opening another stand in Barstow that sold tacos and shakes, and a few years later he opened three stands dedicated to tacos, which he called Taco Tias. Obviously, it didn’t end there. Bell became more and more ambitious. Even when the three stores started raking in $50,000 a year each, he was happy to give them up for the chance to expand into Los Angeles.

The move was risky; Bell bought two lots to build restaurants on, but in doing so he became strapped for cash. To solve the problem, he ended up partnering with a few of the L.A. Rams footballers who trained near a Taco Tia and loved the food. Together, they were able to build several stores and make a profit in their first year, quite the accomplishment for a single restaurant, let alone a few in their debut. The restaurants were called “El Tacos.”

However, Bell wanted a business that he solely owned, so he built essentially the exact same restaurant, but re-branded it as “Taco Bell” in 1962 in Downey.  He followed it up with eight other small Taco Bells on Long Beach. He then set about franchising his restaurant, with the first Taco Bell franchise purchased in 1964; this first franchise, run by an old L.A. policeman, did unbelievably well, and the owner was reportedly bringing in around $10,000 per month (around $74,000 today) almost right away.

After that raging success, it’s no wonder that people were clamouring to own a Taco Bell. A mere three years later, in 1967, they opened their 100th restaurant in Anaheim. Just three years after that, the company “went public” with 325 restaurants in 1970. What had once been a tiny hot dog stand had evolved into a huge Mexican fast food company in a little over a decade.