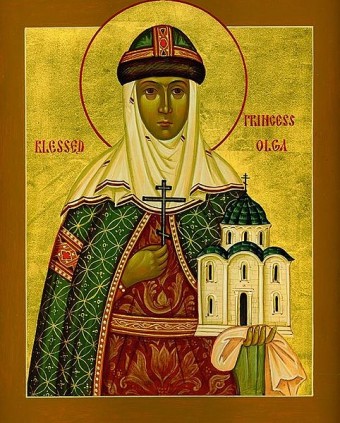 Today I found out about Princess Olga of Kiev, the saint who buried people alive and didn’t exactly take to heart the whole “Do not seek revenge or bear a grudge against anyone among your people, but love your neighbor as yourself.” [Leviticus 19:18] thing- she hadn’t converted yet after all- when she burned down a city and had much of the populace killed or enslaved out of revenge.

The exact year that Princess Olga was born is disputed. The Primary Chronicle states her birth year was 879, while other sources claim she was born in 890. Given that we know her only son was born in 942, the earlier date is very unlikely, and even the later date is questionable. There is also no solid evidence as to her place of birth, with sources placing her in Pskov or Veshchy.

What is known about Olga is that sometime before 912, she married Prince Igor, the son of the founder of the Rurik Dynasty of Russian tsars. In 912, the pair took to the throne of Kievan Rus. As previously mentioned, the pair had a son named Svyatoslav in 942.

Three years after the birth of his son, Igor travelled to meet the Drevlyans, a Slavic tribe who owed him tribute. When Igor demanded more than the Drevlyans thought his rule was worth, instead of paying him, they simply killed him.

Igor and Olga must have had a pretty happy marriage, because she did not take his death very well. Her three-year-old son was next in line to the throne, which meant that, as his mother, she became regent until he was old enough to rule by himself. While having a woman in charge of the government wasn’t exactly the norm, she had the full support of the Rus army to back her regency.

The Drevlyans weren’t so keen on a female leader. They decided to send ambassadors to negotiate a marriage between Olga and Prince Mal, their top choice for king. According to the Primary Chronicles, originally compiled in 1113 in Kiev, Princess Olga had all of the ambassadors buried alive as follows:

Now Olga gave command that a large deep ditch should be dug in the castle with the hall, outside the city. Thus, on the morrow, Olga, as she sat in the hall, sent for the strangers, and her messengers approached them and said, “Olga summons you to great honor.” But they replied, “We will not ride on horseback nor in wagons, nor go on foot; carry us in our boats….” So they carried the Derevlians in their boat. The latter sat on the cross-benches in great robes, puffed up with pride. Thus they were borne into the court before Olga, and when the men had brought the Derevlians in, they dropped them into the trench along with the boat. Olga bent over and inquired whether they found the honor to their taste. They answered that it was worse than the death of Igor’. She then commanded that they should be buried alive, and they were thus buried.

But that isn’t where her revenge ended—she insisted that the Drevlyans send her better suitors, which they agreed to do. When the second batch came, she locked them in the bathhouse and set fire to it.

As if that wasn’t enough, she supposedly had 5000 men killed at a feast held in her honour when she visited the Drevlyans to finish her husband’s job of collecting their tithes. Given her attitude over the ordeal, it seems reasonable enough to think there is a grain of truth to the story, though it’s likely that the number of deaths was grossly exaggerated in the Chronicles.

As a last act of revenge, she besieged a Drevlyan city that refused to pay their taxes. They asked to parlay and offered various goods such as honey and furs in exchange for their transgression. She instead asked for much less, simply wanting three sparrows and three pigeons from each household in the city. The Drevlyans thought they came out on top with this deal, so they agreed.

However, according to the Primary Chronicles, she then used a strategy that about 1000 years later the U.S. military strongly considered using against Japan during WWII (but with bats in the latter case)- namely, release the animals near the city with means to set the place ablaze after they’ve roosted for the night.  In testing, the bat-plan worked extremely well (even accidentally burning down the testing base), as it did when Olga tried it with the birds:

Now Olga gave to each soldier in her army a pigeon or a sparrow, and ordered them to attach by thread to each pigeon and sparrow a piece of sulfur bound with small pieces of cloth. When night fell, Olga bade her soldiers release the pigeons and the sparrows. So the birds flew to their nests, the pigeons to the cotes, and the sparrows under the eaves. The dove-cotes, the coops, the porches, and the haymows were set on fire. There was not a house that was not consumed, and it was impossible to extinguish the flames, because all the houses caught on fire at once. The people fled from the city, and Olga ordered her soldiers to catch them. Thus she took the city and burned it, and captured the elders of the city. Some of the other captives she killed, while some she gave to others as slaves to her followers. The remnant she left to pay tribute.

Hell hath no fury and all that, right? So it might surprise you that this vengeful woman was made a saint in Roman Catholocism and Russian Orthodoxy. Before she came into power, Kievan Rus was a pagan society, but Olga changed all of that by converting to Christianity. She was baptized sometime between 945 and 957.

Her son did not approve of his mother’s conversion. He believed that Christianity wasn’t a very “tough” religion and by switching she would lose the respect of the military, who had stood by her even after her husband’s death. Indeed, when Svyatoslav was finally old enough to take control of his realm, he mostly focused on trying to improve the military and was more or less uninvolved in other aspects of running the country. While he was off on military campaigns, he left his son, Vladimir the Great, home with Olga, who must have had a pretty big influence on him. Vladimir went on to declare Christianity as the official religion of Kievan Rus when it was his turn to take over.

Olga even went so far as to request archbishops and priests appointed to her country, but because her son—a pagan—was technically in charge at the time, the Holy Roman Emperor accused her of lying and trickery (let’s face it, she didn’t have the best reputation at the time). One archbishop also claimed that it was impossible to convert the people of Keivan Rus. When he tried, he was expelled by Svyatsolav’s allies and his fellow travellers were killed. The Romans clearly thought that they would be sending their priests to their deaths. However, it’s entirely possible that Olga’s intentions were pure. Her side of that particular story was never told.

To lend credence to her innocent intentions, before she died in 969, Olga secretly kept a Catholic priest near her at all times. Her son disapproved of her Christian ways, but with the priest, she was able to get her last rites, and her son did allow a Christian burial rather than the pagan celebration. Though the country remained pagan for the remainder of Svyatoslav’s reign, his son Vladimir did make Christianity the official religion of the nation in the 980s.

Despite her previous bloody revenge on the Drevlyans, Olga was made a saint in 1547 because of her efforts to create a Christian nation. Even though she didn’t succeed in converting her son, she is called “Isapostolos” or “equal to the apostles.”