The Origin of the Expression “Open a Can of Worms”

January 22, 2014 Matt Blitz 2 comments
Seth asks: Where does the expression “open a can of worms” come from? 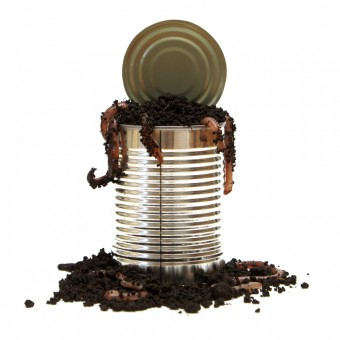 For the uninitiated, the expression “to open a can of worms” means to attempt to solve one problem, or to do something, that creates a whole litany of other problems that were not there in the first place. The idiom has become a journalistic and writing cliche over the years. For example, this line from Daily Record of Glasgow in 2006, “Africa is a huge can of worms and we can no longer stick our heads in the sand,” which seems to be combining two cliches into one and not making sense in either direction.

The exact origin of the phrase is not completely known, but general consensus traces it back to the 1950s in the United States and literal cans of worms. Fisherman used to buy sealed metal cans of earthworms, as opposed to the plastic containers or Styrofoam cups of today. After arriving at their fishing spot, they would set the metal can down and open it. What was inside was alive and if the top was left open for too long or the can was tipped over, well, your biggest problem would no longer be catching fish. It would be catching your bait that’s wriggling away.

The earliest documented example of this phrase is found in 1951 edition of the Edwardsville Intelligencer in Illinois,

The question of command for Middle East defense against Soviet aggression is still regarded as ‘a can of worms’ at General Eisenhower’s SHAPE headquarters here.

While the story evolved over time, the basic tale of Pandora begins with Zeus, the king of all the gods on Mount Olympus, making the decision to hide the gift of fire from mankind. Zeus believed that humans (who at this point were all men) were being selfish in their sacrificial offerings and withheld fire as punishment.

Prometheus, known for being the immortal champion of mankind and scientific progress, stole fire back and delivered it to the people. This angered Zeus tremendously. As punishment, Zeus ordered Hephaestus, the god of craftsmanship, to create Pandora, who was to be the first woman on Earth. Knowing never to refuse Zeus, Hephaestus made Pandora out of the Earth and water.

The other gods and goddesses added their own flourishes – Athena gave her clothes and taught her how to weave, Aphrodite gave her beauty and the ability to love, and Hermes gave her the ability to talk and be curious. The name Pandora actually means “all gifts,” as in she had taken all of the gifts of the god and goddesses. Additionally, Pandora was given a jar – or box – that she was told to never open under any circumstances.

Rather than giving Pandora to Prometheus himself, Zeus presented Pandora as a gift to Prometheus’s brother Epimetheus, who was known to be foolish. Despite warnings from his brother, Epimetheus was blinded by the beauty and the curious nature of Pandora and accepted the gift.

Well, that curious nature, given to her by the gods, got the best of Pandora. Despite the warning about the jar she was holding, she opened it. From that jar came all the evils we know in today’s world: sickness, old age, suffering, toiling, and death. The only thing not to fly out was the Spirit of Hope, Elpis.

Pandora, saddened by what she had done, feared that Zeus would punish her. Fortunately, Zeus had mercy on her and, instead, punished Prometheus again. Zeus had him chained to a rock and sent an eagle, the symbol of Zeus, to fly down and eat his liver out of his body. The next day, the liver grew back and the eagle was sent again to feast, and so on. Prometheus, being immortal, had this to look forward to for all time.

How Did the Term “Open a Can of Worms” Originate?
Can of worms
open (up) a can of worms
What Does It Mean to “Open a Can of Worms”?
Cliches – Over 1500 Phrases Explored and Explained – From Google Books
Why is Q Always Followed by U?: Word-Perfect Answers to the Most-Asked Questions – From Google Books pg.
Pandora’s Box – Wikipedia
Gaia Foundation – The Story of the Opening of Pandora’s Box
Oligochaeta -Wikipedia
Prometheus – Wikipedia
Epimetheus – Wikipedia