January 10, 2014 Kathy Padden
Karla asks: Where did the “Hokey Pokey” come from? 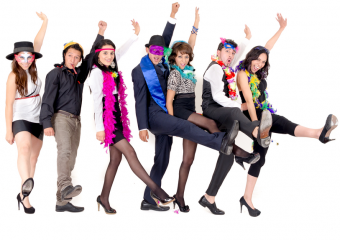 There’s no one definitive answer to where the Hokey Pokey (or Hokey Cokey) ultimately derives from.  Even the modern history of it is somewhat convoluted. Proposed origin theories span oceans, and even centuries. That said, the convoluted nature of the history of something has never stopped us from trying to trace the origin before, so here goes.

Like many innocuous songs and dances that you’d assume have fairly benign origins, the Hokey Pokey is believed by some to have fairly sinister beginnings. There are those who insist the song originated with Scottish Puritans in the UK as an anti-Catholic taunt. The words “hokey cokey,” which is how the song is sung in the UK, is supposedly derived from the magician’s incantation “hocus pocus.” Hocus Pocus popped up in the 17th century as a part of the conjuration phrase: “Hocus pocus, tontus talontus, vade celeriter jubeo.”  It’s thought by some that this derived from the phrase spoken at Catholic Mass: hoc est enim corpus meum,” or “for this is my body.”

Thus, this “hokey cokey” origin theory is that it was supposed to be a jab at the Catholic doctrine of transubstantiation, the belief that the bread and wine turn into the body and blood of Christ during the Mass. As recently as 2008, a few Catholic Church officials have considered the “Hokey Pokey” as an example of “faith hate,” but it doesn’t seem most took these allegations all that seriously and there isn’t much in the way of documented evidence to back up the “Catholic hate” origin theory.

So what do we actually know about the song?  In 1857, two sisters from Canterbury, England who were visiting Bridgewater, NH, brought a little English/Scottish ditty with accompanying gestures across the pond.  The song is thought to be based on the Scottish “Hinkum-Booby.” (“Booby” here referring to the “stupid” definition, rather than the more modern alternative definition you might think of when shaking things about.) The song went a little something like this:

It then continued with other body parts being put in and out and shaken all about. Whatever the Hokey Pokey is all about, it sure gets around.

Fast-forward to 1940 during the Blitz in London, a Canadian officer suggested writing an action party song to English bandleader Al Tabor. The song’s title, “The Hokey Pokey,” was supposedly in homage to an ice cream vendor from Tabor’s childhood, who would call out “Hokey pokey penny a lump.  Have a lick make you jump.”  In this case, “hokey pokey” was supposedly a slang at the time for ice cream and the ice cream seller was called the “hokey pokey man”. Presumably borrowing from the aforementioned English ditty, Tabor put it together with “hokey pokey” and the song was almost, but not quite, complete; after all, it’s called “Hokey Cokey” in the UK.

Tabor, after a bit of a legal battle, eventually signed over all rights to the song to famed Irish songwriter and publisher Jimmy Kennedy as part of the settlement the two reached over a lawsuit concerning the song. It should also be noted here that Kennedy’s son claimed that Jimmy Kennedy, not Al Tabor, was the primary author of the lyrics and it was Jimmy that made the decision to go with “cokey”.

Across the pond, supposedly independent of Tabor’s or Kennedy’s work, in 1944, two musicians from Scranton PA named Robert Degan and Joe Brier made a record of a song called – wait for it – “The Hokey Pokey Dance.” This song was recorded for the entertainment of the summer crowds at Poconos resorts. The tune proved to be a regional favorite throughout the 1940s, but it’s still not the version that we shake it all about to today.

In 1949, Charles Mack, Taft Baker and Larry Laprise, “The Ram Trio,” made their own version of the song , which is closer to the version we all know and love today. The Ram Trio also supposedly independently developed the song, but in reality probably learned it from vacationers who’d heard it at the Poconos resorts. The song was penned for the amusement of skiers at the Sun Valley Resort in Idaho. It proved to be a big hit, so Laprise decided to record it.

Interestingly enough, despite the legal battles over the song, between Tabor and Kennedy in the UK and Laprise and Degan/Brier in the US, going on around the same time, the two pairs never sought to sue their counterparts across the pond.

So, as you can see, the story of the “Hokey Pokey” is more convoluted than a 1980s “General Hospital” storyline. In the end, the ultimate origin of what it’s all about seems to have been lost to history. If you choose to believe Al Tabor’s anecdote, though, at least the recent derivation of it is about ice cream. 😉