Cutting the Nets: The Origin of a College Basketball Tradition 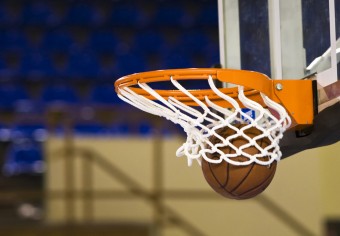 The buzzer sounds. The teammates’ hands link and raise up in victory. The heads of the other team dip in defeat. The orange basketball is flung up in celebration. Young student-athletes dance around, releasing a year’s worth of pent up stress due to basketball and (in theory) school-work. Another men’s basketball NCAA championship has been won. The winning team gathers, exchanging high-fives and hugs, as ladders are brought out to the court and positioned underneath the baskets. With a pair of scissors in hand, each member of the team, from the players to coaches to the training staff, are given a chance to climb the ladder and snip a tangible piece of this memory for themselves.  By doing this, they are engaging in the tradition known as the “cutting of the nets.” The basketball net, the very same one that had shot after shot swish through pushing this team to victory, has now become a piece of sports memorabilia. This custom of “cutting the nets” began where many other basketball traditions had their beginnings — in the state of Indiana.

When asked by his Indiana high school yearbook what he believed his future occupation would be, Everett Case answered “basketball coach.”  And this was in 1919 — before the NCAA, before the NBA, and before basketball held the American sporting conscious like it does today. For an 18 year old high school graduate to answer that question with an occupation that was, well, not really an occupation at the time, showed his undying passion for the game.

Upon graduation, Case attended the University of Wisconsin-Green Bay. Afterwards, he went to the University of Illinois to study the finer points of the game under the great Ralph Jones, considered by many to be the father of Indiana high school basketball. At the age of 22, Case was selected over 18 other applicants to become Frankfort High’s basketball and track coach. Within three years, Case had led the small central Indiana high school to the state championship. Over his 16 season tenure at Frankfort, Case’s teams would win the state championship three more times. After each championship, Case would remind his boys to always cherish the memory and, perhaps, to take a little something that would help them with that task. Often, that little something were the basketball nets.

In 1941, and at the age of 41, Everett Case gave up being a high school basketball coach to join the Navy. It was said that Case, ever enthusiastic and patriotic, joined in such a haste that he left his desk at the school fully stocked and didn’t retrieve his belongings until he returned five years later. While in the Navy, Case was commissioned as a senior-grade lieutenant and trained in Chicago and California. But his real talents were coaching and organizing young men to play basketball. He was appointed the Navy’s assistant athletic director and director of basketball.  After the war, Case returned to the state of Indiana to retrieve his belongings from his desk, but he did not stay long. Upon leaving the Navy, he took his coaching expertise south and became the head coach at North Carolina State University.

Case had immediate success at NC State, leading them to the 1946 Southern Conference title. In 1947, NC State again won the conference title. Upon victory, Everett Case, excited, proud, and wanting to cherish the memory, harked back to his days at Frankfort High in Indiana. Remembering his players snipping the net, he asked arena workers for a ladder.  Unfortunately, there was no ladder to be found. Case, undeterred, had his players hoist him up on their shoulders for him to grab his twine memento. The Hoosier tradition had found its way to the national stage.

Case would go on to become a coaching legend, establishing NC State as a college basketball powerhouse. They would win four more Southern Conference titles before moving to the Atlantic Coast Conference (the ACC) and winning four more. He was named the ACC Coach of the Year three times.  Case is credited in turning North Carolina, always football country, into a basketball-crazed state (for evidence, watch a Duke or UNC basketball game). He popularized the postseason tournament, convincing the ACC to put on their conference tournament in his home arena and the NCAA to award the winner of the conference tournament automatic entrance into the NCAA championship tournament.  He is still the winningest coach in NC State history and was enshrined into the Basketball Hall of Fame in 1982.

In 1964, Case was diagnosed with multiple melanoma, a cancer of plasma cells. The disease is incredibly painful as it slowly eats away at the bone marrow in one’s body. Case had to retire only two games into the season.  During that year’s ACC tournament, Case was not on the sideline, but rather sat courtside and confided to a wheelchair. He watched as his NC State Wolfpack upset the top-ranked – and interstate rival – Duke Blue Devils. When the final buzzer sounded, the players walked over to Case and helped him out of his wheelchair. They placed their beloved coach on their shoulders and watched as Case snipped his final net. Eighteen months later, Everett Case would pass away, but the tradition of preserving lifelong college basketball memories with a snipe of twine still persists to this day.