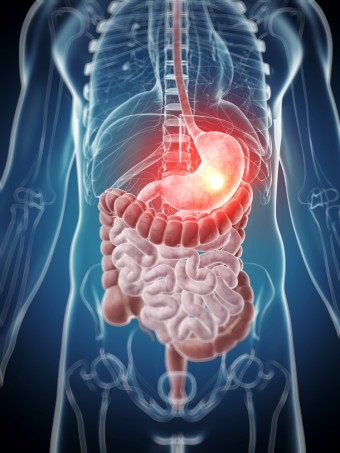 When it comes to science, we think there’s a saying that is fairly applicable, “who dares, wins”. Fans of military history may recognise that as the motto of the Special Air Services (SAS). However, we feel scientists and researchers deserve to use it just as much, because sometimes they take risks too. Just ask Barry J. Marshall if you don’t believe us.

Marshall is known primarily for his work revolving around peptic ulcers. If you don’t think that sounds important, ask someone who has had them how painful they are and then shield your groin from the barrage of kicks as they try to give you some idea of the level of pain. Beyond the agony and the decreased quality of life it can cause, peptic ulcers have been linked to increased chances of one getting stomach cancer.

Prior to Marshall’s work, it was commonly accepted by the medical community that ulcers were caused by a combination of stress, spicy food and too much stomach acid being produced. Something that many people still believe to this day. Seriously, ask anyone on the street what causes stomach ulcers and “stress” will likely be one of the answers you’ll get.

Marshall’s first significant encounter with stomach ulcers was while training to become a specialist in gastroenterology. During this time, he came into contact with Dr Robin Warren, who just so happened to be treating several patients with crippling stomach ulcers. During treatment, Warren had collected samples of a bacteria that seemed present in every ulcer patient.

This bacteria, Helicobacter pylori was later found to be directly responsible for ulcers. That said, neither Warren nor Marshall discovered the bacteria. In his work, Helicobacter pylori: Physiology and Genetics, Marshall himself penned a section on how humanity has been aware of the bacteria since 1893. Along with this, links between the bacteria and ulcers had been suggested as early as 1940 by Dr. A. Stone Freedberg, a cardiologist from Harvard.

In fact, it’s widely accepted that if Freedberg would have continued with his research into these microbes and ulcers, he likely would have solved the problem decades before Marshall did. However, Freedberg’s boss pressured him to abandon his research in favor of something that would be easier to prove, so that’s exactly what he did. In the meantime, millions of people suffered and lost chunks of their stomachs via wholly unnecessary surgery.

One of the reasons Freedberg, and indeed just about every other scientist and microbiologist that wasn’t a crazed Australian, gave up on this line of reasoning was due to overwhelming opposition from the wider scientific community. As mentioned, up until Marshall shotgunned a glass of the bacteria, the commonly accepted cause of ulcers was stress and stomach acid, as it was believed no bacteria could thrive in the highly acidic environment of the stomach. You know, even though people had been finding said bacteria in stomachs since 1893. There was also the fact that there was a lot of documented evidence that antibiotics cleared ulcers right up.

In the case of Freedberg, when he made his prediction about the link between bacteria and ulcers and tests were inconclusive, his superiors essentially told him to give up and stop wasting his time. On a similar vein, when Greek doctor John Lykoudis presented his findings that antibiotics kicked ulcer butt in 1964, his evidence was largely ignored because it went against the current consensus. In fact, in 1968, when Lykoudis refused to stop treating (and curing) his patients’ stomach ulcers with antibiotics, he was fined 4000 Drachma for his troubles and was largely regarded as a quack until Marshall went all freshman on a glass of Helicobacter pylori.

In other words, suggesting ulcers were caused by anything other than stress was career suicide. Regardless, both Marshall and Warren continued with their research and although the pair managed to cultivate Helicobacter pylori, they couldn’t make it cause stomach ulcers, regardless of how many piglets they injected it into. Science is cruel, folks.

…1984 was a difficult year. I was unsuccessfully attempting to infect an animal model. There was interest and support from a few but most of my work was rejected for publication and even accepted papers were significantly delayed. I was met with constant criticism that my conclusions were premature and not well supported. When the work was presented, my results were disputed and disbelieved, not on the basis of science but because they simply could not be true. It was often said that no one was able to replicate my results. This was untrue but became part of the folklore of the period. I was told that the bacteria were either contaminants or harmless commensals.

At the same time I was successfully experimentally treating patients who had suffered with life threatening ulcer disease for years. Some of my patients had postponed surgery which became unnecessary after a simple 2 week course of antibiotics and bismuth. I had developed my hypothesis that these bacteria were the cause of peptic ulcers and a significant risk for stomach cancer. If I was right, then treatment for ulcer disease would be revolutionized. It would be simple, cheap and it would be a cure. It seemed to me that for the sake of patients this research had to be fast tracked. The sense of urgency and frustration with the medical community was partly due to my disposition and age. However, the primary reason was a practical one. I was driven to get this theory proven quickly to provide curative treatment for the millions of people suffering with ulcers around the world.

After a while, he was basically having to wrestle 50 pound pigs on a daily basis and he reasoned that there had to be an easier way. Even though Marshall was absolutely convinced the bacteria caused stomach ulcers, he couldn’t test his theory on humans. However, no law could stop Marshall from testing his theory on himself.

Which is exactly what he did on June 12, 1984. Marshall finished his workday after drinking the bacteria. If movies have taught me anything, scientists who test their theories on themselves invariably become either superheroes or supervillains, and that’s kind of what happened here.  At least, I assume most people who’ve had the misfortune of suffering from ulcers consider Mashall to be something of a superhero.

So what exactly happened after he drank the offending microbes?  Despite Marshall thinking that it would take weeks if not months for anything significant to occur, just a few days later, he developed ulcers for the first time in his life, along with presumably the inability to stop extending his middle finger at the medical community.

Marshall put a stop to his little experiment after two weeks when his wife found out about it. He didn’t need to be a scientist to know that upsetting your wife is worse for one’s well-being than stomach ulcers, even when factoring in the potential increased risk of getting stomach cancer. 😉

But, as he said, “She was already convinced about the risk of these bacteria and I knew I would never get her approval. This was one of those occasions when it would be easier to get forgiveness than permission.”

After a biopsy to further document this event, he then treated himself with antibiotics and was soon fully cured of the ulcers.

At this point, certain people within the medical community started paying closer attention to Marshall’s research and taking it a whole lot more seriously.  However, it still took time and a significant amount of work and publicity to get the message across; even into the early 1990s after curing numerous people of ulcers and publishing several papers on the subject, many in the medical field still scoffed at him and even outright accused him of pushing snake oil-like treatments onto their patients through the media who was eating up the battle Marshall was waging. Of course, the fact that these patients predominately ended up cured was winning over more and more medical professionals as time went by.

Finally, in 1994, it all changed when the National Institutes of Health (NIH) held a two day summit in Washington D.C. over the matter. They could no longer ignore the evidence. At the end of the summit, they released a statement stating that “the key to treatment of duodenal and gastric ulcer was detection and eradication of Helicobacter pylori.”

With that stamp of approval on his work, the majority of the holdouts in the medical community switched their stance and accepted Marshall’s hypothesis.  Eleven years later, in 2005, he was given a Nobel prize for his work, which was all the more impressive given the extreme opposition he had faced.  Sure, scientists (and really everyone) should always question new ideas and thoroughly vet them.  But when a mountain of well documented evidence in easily repeatable scientifically done experiments clearly shows the old theory was wrong and the new one right, one shouldn’t continue to oppose it just because it’s not what was believed before.  Yet, it took Marshall climbing on top of that mountain of evidence and showing his ulcer filled stomach before anyone started to listen.

Let that be a lesson to everyone.  Even the smartest of us humans are amazingly susceptible to getting stuck in a “knowledge rut.”  Always question everything, and never stop learning.  Also, Australians are kind of badass.  🙂