England’s Proposed Secret Weapon- A Massive Ship Made of Ice 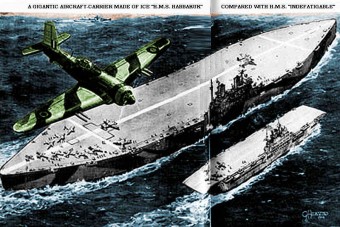 Today I found out that the British once planned to construct a massive aircraft carrier during World War II… made of ice. Surprisingly, it wasn’t as crazy as it sounds at first glance.

Britain was taking a beating from the German ships and submarines and were looking for something to build a ship out of that couldn’t be destroyed by torpedoes, or at least could take a major pounding without incurring a fatal amount of damage. With steel and aluminum in short supply, Allied scientists and engineers were encouraged to come up with alternative materials and weapons.

A scientist named Geoffrey Pyke was the king of alternative ideas (as you’ll see in the Bonus Facts below). One of his ideas was to build a 2,000 foot long, 300 foot wide and two million ton carrier. Pyke named his project Habbakuk, a biblical reference that seemed to mirror the project’s goal: “…be utterly amazed, for I am going to do something in your days that you would not believe, even if you were told.” (Habakkuk 1:5, NIV) Unlike in the Bible though, the ship’s name was spelled with two b’s and one k, which is thought to be simply a spelling error that was repeated so many times that it became official.

Besides the ship’s size, what was so different about Pyke’s vessel was that it would be built of ice. There is no real limit on the availability of ice; it’s easy to make, fairly durable (except in warm temperatures), buoyant, and very easy to repair when damaged.  Further, repairs can be made extremely quickly with the right equipment, even during a battle.

The ship was also to include 40 dual-barreled gun turrets, as well as other anti-aircraft guns, and an airstrip that could accommodate up to 150 fighter planes or twin-engined bombers.

Pyke was able to sell Winston Churchill on his plan in 1942, including Churchill stating it should be given the highest priority.

In testing, though, it was discovered that ice might not be as strong as the ice-bergs that Pyke modeled his idea on. It turned out that ice frozen into blocks for the hull could be broken very easily with something as small as a hammer. The project was temporarily abandoned as a result.

However, later that year, a New York polytechnic firm added cellulose- sawdust, wood chips and paper shreds- to water and froze it for a much more promising base structure for such a ship. Not only was it stronger than straight frozen water- with as little as 4% of wood pulp added it made it as strong as concrete, pound for pound- it was also much slower to melt and more buoyant. Pykrete, named after Geoffrey Pyke, could also be cut like wood and easily milled into shapes like metal.

There was one problem though- melting and refreezing would cause warping in the structure. Tests showed that a pykrete ship would eventually sag unless consistently cooled to around 3° Fahrenheit. To maintain this, the ship’s surface would have to be covered in insulation and it would need a refrigeration plant and duct system.

To test the feasibility of getting around this problem, a small scale version of the Habakkuk was constructed in Alberta, Canada’s Lake Patricia to experiment with insulation and refrigeration possibilities and to see how it would stand up to artillery shelling. The test ship was 30 feet wide by 60 feet long, weighed 1,000 tons and was kept refrigerated with a one-horsepower engine, which was sufficient to keep it from melting even through the hot summer months.

In ballistic testing, it was determined that a direct torpedo hit would only cause about a 10 foot crater in the hull, which was insignificant given the size of the proposed ship.  Thus, it would be nearly impervious to torpedo attacks for all practical purposes, as it would take a huge number of torpedoes and other bombs to sink the ship. So even if the ship was broken up, the Axis powers would have had to invest a massive amount of their resources in a given area to do it (particularly considering the arsenal of aircraft the ship carried), which would have weakened them significantly on other fronts during the attack.  If they were unsuccessful, the ship could be easily and quickly repaired right on the spot.

So overall, the test ship made the full size version seem like it might actually work out.

At this point, it was estimated that construction on the real Habakkuk would cost $2.5 million (about $32 million today), which is a bargain for a ship like this.

There were still some hurdles to overcome, though.  The rudder on such a ship would have to be massive.  How to effectively mount this in the structure in a way that would be resistant to attack was a problem, as was controlling such a rudder. Also, the amount of wood pulp needed would have impacted paper production;  while this ship used significantly less steel than most, the steel tubing it did need for reinforcing the structure would have depleted reserves for conventional, proven warships; a huge amount of cork would also be required to insulate the ship; and, finally, the ship’s top speed of just six to seven knots (6.9 to 8.1 mph) was deemed too slow, even with it being fairly torpedo-proof in terms of the main structure itself.

In the end, these problems, combined with the fact that during the planning phase the range of aircraft had increased significantly to the point where the need for a floating island became less necessary, ultimately sunk the plan.

While the plan to build Habakkuk was short-lived, its prototype was surprisingly resilient. It took three hot summers to completely melt the smaller version of the boat.