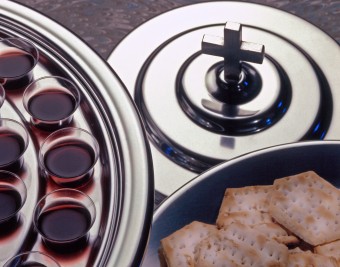 Today I found out that Welch’s Grape Juice started out as a substitute for sacramental wine.

You’ve probably heard about Jesus turning water into wine, but Dr. Thomas Bramwell Welch is a lesser-known drink magician who developed a way to turn something that would have been wine into a non-alcoholic version of the drink, in an attempt to make an “unfermented sacramental wine”.

Dr. Welch was a physician, a dentist and a Methodist minister in Vineland, New Jersey. At the time, Methodists were strongly opposed to the consumption of alcohol. This made serving wine for communion somewhat hypocritical, a discrepancy that Welch was quick to point out. His stance on the matter was so strong that he was even opposed to touching a container holding wine—a problem, since he was the communion steward.

The last straw was supposedly when a member of the church turned up at the Welch home one Sunday evening after partaking in a little too much of the communion wine. Welch was furious at the man’s raucous behaviour.

So, what to do about it? Being something of a jack-of-all-trades, Welch took on the endeavour himself.  He sought to come up with a way to bottle grape juice so that it wouldn’t eventually turn into wine. In 1869, he pressed juice from Concord grapes, filtered and bottled it in his own kitchen, and then used Louis Pasteur’s innovative new technique called “pasteurization.” He boiled the bottles of grape juice, which not only helped preserve the juice, but also killed all of the yeast in the bottles. This prevented fermentation, so the drinks would not be alcoholic.

After successfully preparing the drink, Dr. Welch delivered it to his church and even advertised it to surrounding churches as well. However, many clergymen were uninterested in Dr. Welch’s Unfermented Wine; some even called serving it “heresy.”

Needless to say, the unfermented sacramental wine did not get off to a great start. Welch was forced to set his product on the back-burner, though he remained heavily involved in the temperance movement. That said, a small amount of his grape juice continued to be produced for a few churches in the area.

It wasn’t until Welch’s son, Charles, who was also a dentist, started advertising Welch’s in the 1890s that it became more popular.

At the time, Thomas Welch’s advise to Charles was the same as what so many parents tell their children when the youngsters are pursuing a new career path that the parent’s don’t necessarily think has much of a future,

Now don’t think I’m trying to discourage your pushing the grape juice. It is right for you to do so, so far as you can, without interfering with your profession and your health.

Thanks to the rise of the Temperance Movement, Charles’ profession was about to change.  The juice’s appearance at the World Fair in Chicago didn’t hurt, either; thousands of people were able to sample it there in 1893.

In 1896, Welch’s Fruit Juice Company became too big for one family to handle. To help meet the demand, Charles packed up and moved the company to a factory in New York, where he continued to grow the business. (Thomas Welch died a few years later in 1903.)

Welch’s soon became the natural drink substitute for wine; it was made from the same fruit and suited the taste of the Temperance Society. In 1913, Secretary of State William Jennings Bryan hosted a dinner for the visiting British ambassador; while it was traditional to serve wine, Bryan decided to serve Welch’s instead, making it more fashionable. That same year, alcohol was banned on Navy ships and Welch’s grape juice was served instead.

Today, the company is a household name, featured on juice, jellies, and jams. They reportedly rake in nearly a half a billion dollars every year and have since moved their headquarters to Concord, Massachusetts, where they grow cuttings from the original Concord grape vine used.

Not bad for something that started out as the result of a pet peeve of one man who simply wanted to provide a way for people to take communion without alcohol crossing their lips.